Skip to content
Home > Love Where You Live > The WFH Pet Parent: How Caring for a Pet Has Affected Working from Home

The WFH Pet Parent: How Caring for a Pet Has Affected Working from Home 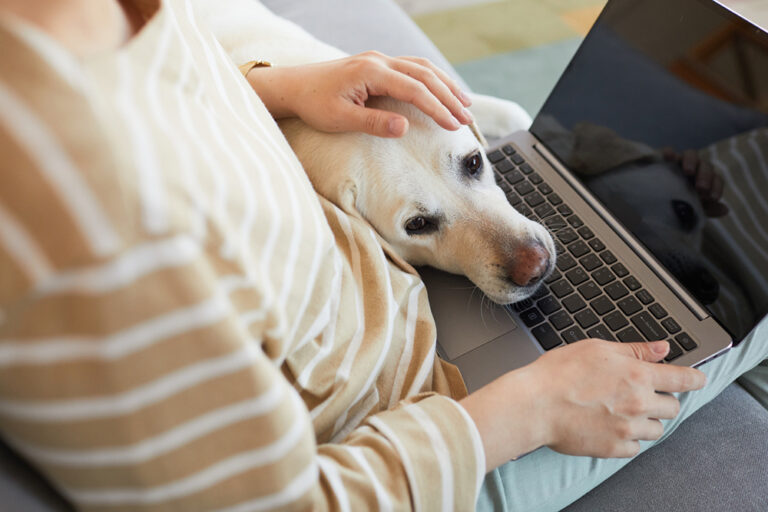 It’s a redundant and clichéd thing to say at this point, but March 2020 was a turning point for many things; how we interacted with our jobs being one of them and home life being another. Although the working world has changed in the years since, millions of us have transitioned from driving to and from work every day to working from home part-time or full-time.

Not only did we have to adjust to a new normal of being home most of the day, but our pets also had to learn to deal with it (deal with us) too. And even though it may have been exciting for the first week or two, it wasn’t long before we were all going a little bats-in-the-belfry.

I asked some folks about their personal experiences working from home and living with a pet, and all agreed that some adjustment was needed.

“I had [Turnip] for four years before I started working from home,” says Mollie Shield of her cat Turnip (I ended up speaking with a lot of cat people). Mollie was working as an admissions counselor in 2020. “I would work from home every now and then, like once or twice a month. And then, suddenly, when I never left, he was like, ‘What are you doing?'”

Indeed, Mollie’s experience with Turnip is closer to what I would’ve expected from a cat parent, me being somebody who’s never had a cat in their life. But when I spoke with Tiffany Castro-Tremblay, she described a different experience.

Tiffany was working retail and had just moved from L.A. to San Diego when economic shutdowns occurred. As a result, her schedule became much more erratic for a time.

“Ever since that point, [Puma’s] had severe separation anxiety,” she explains of her cat, Puma Thurman (pause for laughs).

Since then, Tiffany has begun grad school and is training to be a marriage and family therapist. “When I started [this] job, there was a two-month period where I was just in training… I was just at home 24/7… Puma was very calm at that point. I was giving her treats.”

Puma Thurman was described as a much needier creature than I would have expected a cat to be, and it took Tiffany and her husband some trial and error to figure out what worked best for Puma and their everyday working schedules.

Now, when it comes to dogs, things get a little different, and that’s where I come in.

Fern is a cavapoo, a cavalier/mini-poodle hybrid of ultimate cuteness, and she’s small and very well-behaved for being as young as she is. That said, working from home with a pup was no walk in the park. At first. There was a learning curve, as there is for all of these types of situations. With my wife and I, it was solving the scheduling conflict — who would watch Fern?

Unlike others I interviewed, we got Fern very recently. I had a hybrid job when we got her, while my wife was going into the office all the time. I could be home more often, so that’s what we decided. First, I made sure Fern was played with and fed. Then, I made sure she didn’t eat our books or shoes or crown molding or government-issued I.D.s (those last two I failed to prevent… I don’t have eyes on the back of my head). Eventually, when Fern could be left alone without tearing up the place, we began to entrust her with more and more time by herself while we both went to work.

And that’s really what this is all about — establishing boundaries and a routine. With Fern, it was teaching her that we’d be gone for a certain amount of hours a day, with the promise of walks, playtime, and plenty of food when we returned. We kept our promise to her, and she was happier about it.

My friend Jerome Blanco said something similar about his pet Revvie. Jerome is the only parent of the bunch, and when I say parent, I mean the parent of a genuine human baby girl, so I was interested in getting his take on what boundaries looked like when working.

“Everyone’s here, which means if I’m gonna work from home [my] door’s going to be closed, whereas before [the baby was born], the door would be open.”

Jerome works as a writer and editor for the creative production department of a SoCal-based grad school and has married into his relationship with Revvie the cat. He explains that now there’s a baby in the picture, Revvie has learned to get attention where he can.

Tell me about it, Jerome.

Something that everyone described was establishing boundaries based on two unique things: Your pet’s specific needs and their one-of-a-kind personality. So, whether you have a dog or cat, whether they’re clingy or aloof, or whether they’re old or just chewing and peeing on everything, it pays to know who they are. Your pet is as unique a personality as any person you meet, and you will share a life with them, both in relaxation and work. It will be a journey to learn what works best and what doesn’t work at all, but it’s a journey that will end up benefiting everyone.