Why You May Never See Cities the Same Way Again 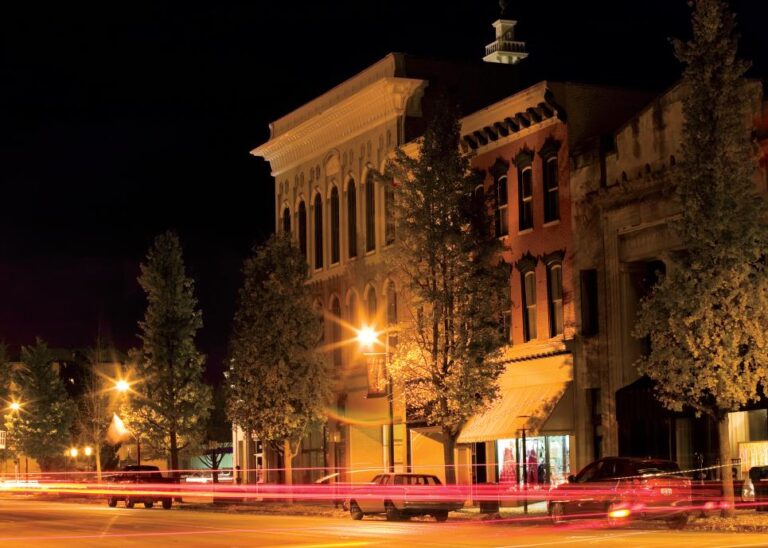 Let there be lights – new lights. In Los Angeles, a switch to LED (light-emitting diode) street lighting has altered how residents, tourists and moviegoers see LA in person and on film.

A decision by city leaders to have all 141,089 yellow-hue streetlights replaced with new blue-tinted LEDs has produced several positive results in LA, including lower electricity costs, improved safety for pedestrians and motorists, and a slash in carbon emissions. The LEDs reduce glare, improve a driver’s ability to better recognize potential road hazards, are less attractive to nighttime insects, and don’t release poisonous lead and mercury gases if damaged.

LEDs also have an effect on Hollywood filmmakers because the blue lights dramatically change how Los Angeles appears on camera at night. The Los Angeles Bureau of Street Lighting points out that for cinematographers, LEDs provide aesthetically pleasing shots with more attractive, subtle color renderings compared to the previous “yellow lights.”

From a cost standpoint, the bill for the LED initiative in LA was $57 million, but lighting experts say the LEDs will save considerable money in the long run because they consume 50-80 percent less energy than conventional lights while eliminating maintenance costs for up to 20 years. Bottom line: Los Angeles should recoup the $57 million within five years through overall citywide energy savings.

More than a dozen other California municipalities have switched to LED streetlights, including the cities of Brisbane, Ceres, Lemoore, Needles, San Luis Obispo and Yountville. In San Luis Obispo, city officials decided to replace their entire stock of 2,000 streetlights with LED luminaries manufactured by Cree, a company regarded among the elite in the lighting-sustainability industry.

“We are expecting to cut maintenance and service expenses by 60 percent annually, which we can now allocate to other city initiatives,” says Barbara Lynch, San Luis Obispo city engineer.

But it’s not just cities in California that are jumping aboard the conversion-to-LEDs bandwagon. Honolulu officials want LEDs installed throughout their vacation paradise to save electricity as well as produce attractive and vibrant nighttime images, a la Los Angeles. Honolulu will also install LEDs that automatically dim in spaces with less traffic or activity.

NYC and Ypsilanti, Too

In New York City, a massive undertaking has begun to replace every streetlight – all 250,000 – with LEDs by 2017. Officials say the energy-efficient blue lights will save the city $6 million in annual electricity costs and $8 million in maintenance.

Meanwhile, several other cities like Atlanta, Baltimore, Boise, Chicago, Dallas, El Paso, Seattle and Washington, D.C., have made the transition to LEDs, and so has the smaller community of Ypsilanti, Mich. – population 19,000. Ypsilanti officials made the decision to convert all 1,189 streetlights in order to reap annual savings of more than $100,000 on the city’s electric costs.