10 Tips For Making the Most of Temporary Housing

By Stephanie Stewart-Howard on January 19, 2016 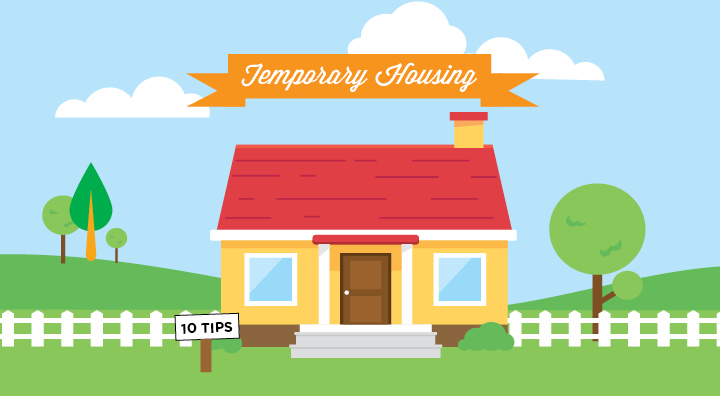 Moving when your job requires it is hard enough, but what happens when you’re forced to opt for temporary living quarters between more permanent dwellings? It is possible to stay calm, organized and not get caught up in a host of unanticipated problems. The secret is planning your move and knowing what you’re getting into before you get to your new destination.

Paul and Anne Koontz sold their Lexington, Ky., home when Anne’s job relocated her to Harbin, China. When they returned home more than a year later, it meant starting from scratch, including having the majority of their belongings in storage. The couple has two dogs, so they also needed to ensure their pets were accommodated. Fortunately, her company provided a living option while they had the time to search for a home to match their profile.

“My company has apartments for temp house relocations; however, they do not allow pets,â€ Anne says. “So they put us in a local apartment for a month while we looked for our own place. Moving from China, there wasn’t much option or the ease of making a short advance trip to find housing here ahead of time.”

Paul, a martial arts instructor and woodworker, was also obliged to find new locations for his own business.

The worst part? “I hated living without my stuff, I hate knowing it’s in a box on a truck or plane or even in storage, but I can’t get to it. I ended up with two or three of some things, and somehow none of other things I know I had. I figure the extras are now backups or donations,â€ she says.

Jeff and Charlotte Johnson, their sons Edward (age 8) and Henry (age 7), plus golden retriever and parrot, moved from Maryland to Colorado with Jeff’s engineering job. Charlotte was heading back to college to pursue a health-care career. The couple spent a week in a hotel, then another three months in a two-bedroom apartment with a short-term lease. Fortunate, Jeff’s company also helped cover moving expenses.

They had short-term “whatever we could fit in two cars and a small trailer,â€ Charlotte says. “Air mattresses, an Ikea chair, office chair and a knock-down table for the computer. The rest was mostly the valuable stuff that we wouldn’t let the movers move.”

Living with two kids in this situation is daunting, and Charlotte says leaving the kids with grandparents for the first few weeks helped greatly and afforded them time to look around and get to know the area.

The apartment had a washer and dryer, which was a major plus, Charlotte says. “Never ever live with kids – or dog – without a washer and a dryer … We were comfortable enough that we could take the time to find a house, but by the end we were rubbed pretty raw. It was a nice apartment, which was good, but still, an apartment.”

Each couple made a different choice for longer-term living. Anne and Paul chose a nicer apartment that met their needs while they take a year to define what they need in a house and find it. Charlotte, Jeff and their boys aimed for a more permanent solution to meet the demands of a larger family, with both couples also working to accommodate pets.

The sale of Jeff and Charlotte’s old house determined the buying of a new one, and, fortunately, it sold quickly. Sometimes the search created headaches of its own.

“We found a place, signed everything, but the sellers refused to fix major problems or lower the price after the inspection unearthed some significant plumbing problems,” Charlotte says. “They decided this at 11 p.m. the Friday before school started, so Monday morning, I ran all over, re-enrolling the boys in the school near the apartment. Two weeks later, we found the house we ended up in, and I enrolled them in their current school.”

With a family move, Charlotte says schools are a determining factor, as was a friendly and lively neighborhood. “I drove around every perspective neighborhood all times of the day, morning, evening, weekend, to see which one had people out and about. We ended up in the neighborhood where I saw the most people out walking, on their front porches or out playing with their kids.”

Five Tips For the Short-Term

Communication with your employer and the moving company is vital. Anne says: “Any problems we had stemmed from someone not getting the details they needed or misunderstanding how things were supposed to work. Don’t be afraid to ask! I was originally told we’d have space in the company apartments, but no pets. That just didn’t work for us, so I asked about alternatives and it all worked out.”

Get an apartment with a washer and dryer. And think about comfort, even in the short-term. Ikea is your friend, Charlotte says.

Don’t rush into a house just to get out of the temporary situation. Make sure the temp is nice enough that you’re OK staying for a while if the right long-term location doesn’t show up quickly.

Short-term leases are a great thing. Make sure you know the terms, including for pets. Also aim to find a lease in a good school district if your children will attend while you’re house-hunting.

Cut yourself some slack while you’re in that space. “I went from cooking every meal from scratch, homemade bread, the whole nine yards, to lots of takeout, quick foods, school lunch, etc.,â€ says Charlotte, who did it all while taking eight college credits. Anne adds, “Have patience and a sense of humor. Things in temp apartments are going to be annoying and difficult. Being able to laugh about it makes it easier.”

Five Tips From a Realtor

Bill Jakes is a realtor with Exit Realty, Bob Lamb & Associates in the super fast-growing Murfreesboro and Nashville, Tenn., area. He offers the following tips for anyone looking at making the best of a short-term location upon a move:

I drove around every perspective neighborhood all times of the day, morning, evening, weekend, to see which one had people out and about. We ended up in the neighborhood where I saw the most people out walking, on their front porches or out playing with their kids.