Skip to content
Home > Make Your Move > Should You Move? Take our Quiz and Find out!

Check it out and see if we can convince you 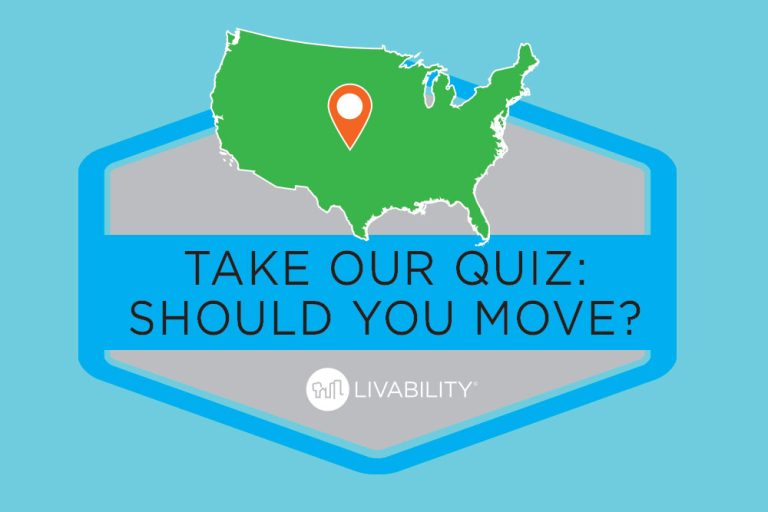 Nearly one in nine Americans changed residences between 2013 and 2014, according to recent data released by the U.S. Census Bureau. While the majority of these moves didn’t involve crossing state lines, or even changing cities, nearly 10 percent of all U.S. residents have expressed a desire to live somewhere else. So what’s keeping Americans from longer moves? Take the Should You Move quiz here.

The new Livability.com quiz Should You Move to a New City aims to help people decide if they are ready for a move by focusing on that question. It asks people to assess their relationships, place fulfillment and personality in order to come to a conclusion on whether moving is the right decision. Do we really think your decision should be based on our quiz? Of course not. Consider it a fun way to approach the subject and perhaps a lighthearted way of introducing the topic to a family member or friend.

The Should You Move to a New City quiz asks takers to consider their current climate, romantic relationships, job skills, financial situation and sense of adventure as they navigate through a series of 12 questions to determine if they are ready to move. After finding the results, it’s up to them to decide what the next step is. What we do know is that moving to a new city can be life changing, invigorating and lead people to a better place, both literally and figuratively.

The following information is taken from a new report written by former Livability.com Editor Matt Carmichael, author of the book Buyographics.

As we know, certain demographics are more likely to relocate than others. Those who are young, single and fresh out of college are far more likely to relocate than those who are slightly older with kids set in their schools. Even so, the number of people who move across state lines in any given year is a small percentage of the population. The population is most mobile between the ages of 18 and 25, at which point mobility drops off sharply.

Livability.com commissioned an in-depth survey, conducted by the leading global market research firm Ipsos Public Affairs, to examine the issues that drive and impact relocation decisions. The survey asked more than 2,000 adults in each of the last three years about the characteristics of livability they value in their current and future communities. The survey was conducted as part of Livability.com’s research into the Best Places to Live, which is based on a robust, data-driven ranking methodology developed in partnership with The Martin Prosperity Institute, which is directed by urbanist theorist Richard Florida. In 2015, Livability.com updated this research to include the following question:

“Please imagine for a moment that you were considering looking for a new job. Thinking about how you would look for and choose your next job, which of the following would be your approach?”

Millennials are more likely to say they could choose a place first then move, but also more likely to say they would find a job and move to the required location. This is understandable considering these 20-somethings have had less time to put down roots, form lasting relationships and land a long-term career. But while it may seem easier for Millennials to move, there are many Americans who are asking themselves how much longer they want to live where they are now. With economic conditions improving, migration forecasters predict that we’ll see more long-distance moves in the near future.

Take our quiz to see if you’re ready for a move.