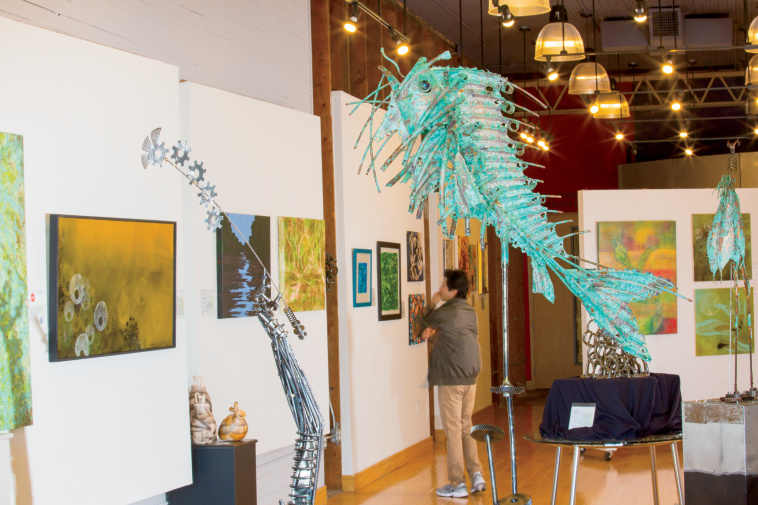 If you want to truly experience Tyler, go downtown – it’s not only the city’s center of community activity and entertainment, it’s also home to well-preserved structures that offer a glimpse into Tyler’s storied history.

“I have the habit of saying that downtown is as ‘Tyler’ as it gets,” says Beverly Abell, director of Heart of Tyler Inc. and department leader for the City of Tyler Main Street department. “We are the living room of the community.”

However, that was not always the case. Downtown Tyler began evolving into its current state in 1987, when members of Heart of Tyler – a 501(c)3 nonprofit organization – began revitalizing the district. The all-volunteer group helped start the community’s Main Street program, and today the City of Tyler, Visit Tyler and Heart of Tyler work together to engage volunteers, businesses and the community in implementing programs in organization, promotion, economic restructuring and design within the context of historic preservation.

To date, the reinvestment in downtown Tyler totals more than $200 million. Countless buildings have been restored to their former glory, and the district is now home to attractions like the Liberty Hall theater and Gallery Main Street, which displays works created by local artists, as well as restaurants, bars, a brewery and a nationally recognized children’s museum. Downtown Tyler also  plays host to dozens of special events and festivals each year, such as the Downtown Tyler Film Festival and the Red Dirt BBQ and Music Festival.

“We work very hard to cultivate what is unique,” Abell says. “This is why we preserve historic buildings; ours speak to our history and are unique to us. When we create an event or project, undoubtedly other towns have done something similar, but we always work hard to tweak that project to address downtown Tyler’s market and needs. Our downtown has something going on pretty much every night, especially Thursday, Friday and Saturday.”

Downtown Tyler is no stranger to awards and accolades and has earned recognition from groups such as the Texas Downtown Association, an independent, statewide nonprofit organization that includes more than 400 members involved in downtown and commercial district revitalization projects.

For example, the 15-story People’s Petroleum Building, built in 1932 and recently renovated, won the prestigious Best Restoration award for cities with a population of more than 50,000 residents in the 2016 TDA President’s Awards Program. According to Abell, the award “recognizes achievement at the very top level for preserving and reusing significant buildings.”

In addition, the Butler Architectural Group/Mike Butler received the 2016 TDA President’s Awards Program honor for Best Commercial Interior in a community with more than 50,000 people.

The newest event in Downtown Tyler, Hit the Bricks, draws residents of all ages to the square the second Saturday of each month for a variety of activities, including live music, food, craft beer, shopping with many vendors, art, history, tours and more.

Attendees can park for free on the square, in the Fair Plaza parking garage (adjacent to ETX Brewing Co. and across the street from The Foundry Coffee House) or take advantage of free valet parking at Rick’s On the Square and Jack Ryan’s.

For details on each month’s event, go to visittyler.com/secondsaturday.

Beauty and the Box

Thanks to Beauty and the Box – a joint venture between Keep Tyler Beautiful, Tyler Solid Waste and the Main Street Department – 10 electrical traffic boxes in downtown Tyler have been transformed into eye-catching public art installations.

The project began in 2016 when local artists were asked to create or photograph original works that could be printed and wrapped around utility boxes, with the winners receiving $250 as well as having their art on display. City employees and Keep Tyler Beautiful board members voted for their favorite entries, and the 10 most popular creations won.

“Any type of quality public art adds beauty, welcome, delight and serendipity to the visitor’s experience,” Abell says. “These improvements also demonstrate that this is a neighborhood that is lively and cared for.”

From music to food and drink to fine art, there’s plenty to celebrate in downtown Tyler, which hosts several fun festivals and can’t-miss events throughout the year. Ready to mark your calendar?