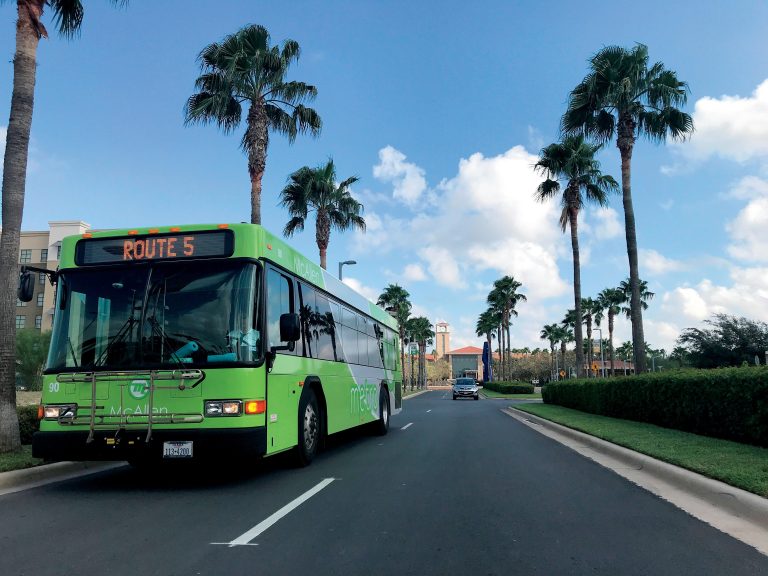 More than 700,000 McAllen residents and visitors know a place to get around town (and the region) with relative ease, and that’s at any of the Metro McAllen bus stops.

The city of McAllen’s transit system was established in 2001 to manage and maintain McAllen Central Station bus terminal in the heart of the downtown district, and today about 700,000 passengers ride the Metro lines each year.

“We understand that public transportation, for many, serves as a lifeline and meets the needs of citizens who are unable to drive or who simply want other mobility options,â€ says Mario Delgado, City of McAllen transit director. “Metro McAllen is important for a growing number of people and for various reasons.â€

“Public transportation relieves road congestion, reduces pollution, helps people of all ages and abilities get to school, work, the grocery store, doctors’ appointments and much more,â€ Delgado says. “Our downtown terminal facility also allows passengers to connect to an array of regional, national and international destinations.â€

Electricity and an App

The transit system has also embraced technology advancements over the years, including the addition of two all-electric buses that are each capable of traveling 150 miles on a single charge. Those vehicles produce zero emissions and are plugged into battery chargers at the downtown terminal each night.

The city has also produced a Ride Systems mobile app that uses GPS tracking to show passengers the estimated arrival time of buses and their real-time locations, and there is also a trip planner feature. McAllen has a fleet of 15 buses.

“The Ride Systems app is free and can be downloaded through the App Store or Google Play,â€ Delgado says. “Users can also receive all alerts and notifications.â€

The Ride Systems app cost McAllen about $50,000, with 80 percent subsidized by federal grants. Delgado says the app is another reason why Metro McAllen is one of the most successful and efficient public transportation systems in all of Texas.

“High-occupancy vehicles like buses is one of the best ways to get people from place to place these days, especially with traffic getting heavier and heavier,â€ he says. “All our buses are equipped with free Wi-Fi, too. We hope many more first-time riders will turn to public transportation to get around the city.â€

Metro McAllen will also be adding a new route (Route 8) in 2019 that will provide service to northwest McAllen for the new Texas A&M University and Tres Lagos community.

Along with buses, the transit system oversees a McAllen BCycle program that gives residents the option of renting city-owned bikes for leisure activities or getting to work.

“In early 2015, McAllen BCycle bike share was introduced to the city and our region with eight stations and 90 bikes,â€ Delgado says. “McAllen BCycle averages 6,200 bike trips per year, and cyclists had traveled a total of 123,000 miles through August 2018. BCycle has really expanded our transportation network.â€

McAllen BCycle is the first bike share program launched in the Rio Grande Valley, and any of the bikes can be used by people who pay for the service with a debit or credit card. Riders can purchase a 24-hour pass for $6, a week-long pass for $15, a month-long pass for $30 or a year-long pass for $65.

Four of the bike stations are located in downtown McAllen, and the other four are at Fireman’s Park, Palms Crossing, the McAllen Convention Center and the Second Street hike and bike trails.

“Getting around McAllen is getting more diverse, and bike share enhances the multimodal options in the city,â€ Delgado says. “Plus bike riding is healthy. We estimate that riders have burned more than 5 million calories since the program started in October 2015.â€