A 70-acre water park with tree house slumber parties, swim-up bars, and a tube ride that leads into a real river? Yes, it exists. Here's where to find it.

For the most part, water parks – while fun – are fairly formulaic: A lazy river, some water slides, and, for dessert, soft-serve ice cream stands.

Then there’s Schlitterbahn, the granddaddy of all water parks.

It’s spread out over 70 acres with more than 50 attractions, plus tree houses inside the park that can be reserved for epic slumber parties and a unique tube ride with a grand finale that empties riders into a real river.

Perched on the banks of the Comal River in New Braunfels, Texas, this legendary water park doubles as a resort because, like a central Texas siren, Schlitterbahn lures tourists from around the state (and the country) looking to escape from the sweltering heat.

Among the star amenities at Schlitterbahn are swim-up bars, super-long tube rides and shade provided courtesy of the cypress and oak trees that line the park. But just in case you need more convincing, here are five more reasons why Schlitterbahn in New Braunfels is the best water park in all the land.

1. Schlitterbahn Has a Strong Sense of Place

Schlitterbahn’s history can be traced back to 1966 when Bob and Billye Henry took over a small resort in New Braunfels. They erected a water slide that careened into the Comal River. The slide was a hit, and, eventually the family decided to add an actual water park. Schlitterbahn eventually opened in 1979, paying homage to its home in New Braunfels, which was settled by Germans. Four water slides were built around a 60-foot tall replica of the Bergfried Tower, the guard tower of the Solms Castle in Braunfels, Germany. As for the “Schlitterbahnâ€ name, it’s a made-up word that combines the German word for slippery – Schlitter – with the German word for road – Bahn.

“The water park was intended to help sell the resort, and then it ended up overshadowing the resort,â€ says Winter Prosapio, director of communications and government relations for Schlitterbahn. (And, yes, Winter, the spokeswoman for a water resort, is well aware of her name’s irony!)

Today, she says, Schlitterbahn is like the Disney of water parks.

Not only does Schlitterbahn incorporate its city’s German heritage, but it also takes advantage of its natural surroundings, namely the Comal River. Tube chutes, tube slides, rides and pools use spring-fed water that stays a cool 72 degrees and flows right back into the river.

2. The Park Has Become a Part of Families’ Traditions

Families, Prosapio says, have been coming to Schlitterbahn for generations.

Vouching for that is Heather Gray, of Denton, Texas. Her parents took her and her sister to Schlitterbahn in New Braunfels when they were children in the 1980s. “To me, Schlitterbahn was one of the most amazing places in the world,â€ she says. “I’d never seen anything like it.â€ Now, Gray and her sister, as well as her cousins, have a tradition of going every year with their own families, introducing the next generation to the water wonderland that is Schlitterbahn.

Gray says she appreciates the family-friendly amenities at the park. For example, Schlitterbahn allows guests to bring in coolers, offers free parking and free inner tubes, has a shuttle service and life jackets available.

“It has the feel of a hometown water park, but yet it’s massive,â€ Gray says. “It’s a perfect combination.” 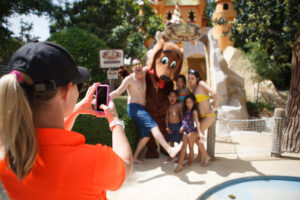 Schlitterbahn is broken up into two parks, with a shuttle that runs between the two: An original section that’s nestled under a canopy of trees and a newer section that features high-tech rides including an uphill water roller coaster. A highlight in the original section of the park is the Raging River tube ride. While most theme park rides end in a flash, this tube ride goes for 45 minutes and takes its final float through the actual river that runs parallel to the park. In the newer section, riders can hop in a tube or bob in the waves in the Torrent River, which is a continuous loop and a park favorite.

4. You Can Learn To Surf From a Pro

No ocean? No problem. Schlitterbahn features a massive surf simulator known as Boogie Bahn, which circulates 50,000 gallons of water to create makeshift waves that challenge surfers and body boarders. Newbies can take lessons from a pro, Cathy Seabert, who has been the US Flow Tour Champion three times. A couple of years ago, she finished top five in the World Flower Tour Pro Female BodyBoard division.

5. You Can Have Sleepovers There (Yes, Really)

Schlitterbahn in New Braunfels has several different lodging options, from hotel rooms to lofts. But a cool way to experience the park? Inside a “Treehausâ€ luxury suite. The resort has seven different tree houses that can be booked for overnight stays. The modern tree houses incorporate hand-carved furniture, and show off views of the waterpark from the balcony.

A slumber party in a tree house at the best water park in the country? Now that’s one unforgettable vacation.