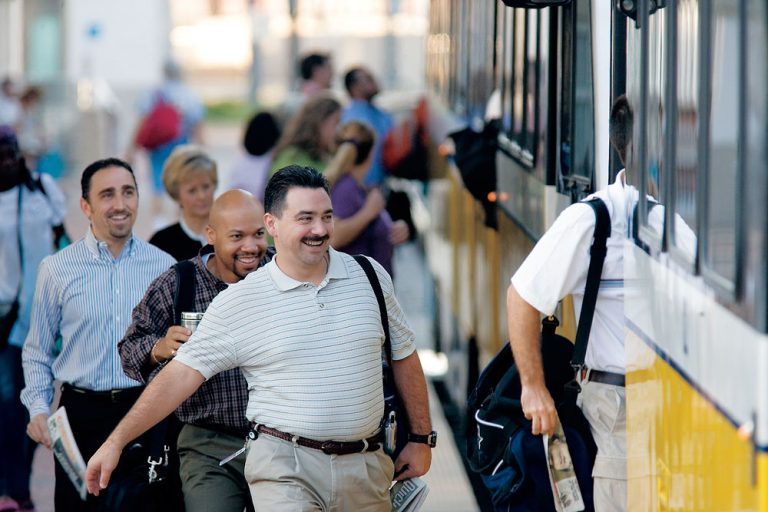 The economy continues to move forward in high gear in Rowlett, and so does the city’s transportation network.

One of Rowlett’s top selling points for new residents and economic development is its location and excellent connectivity to the region. Interstate 30 runs east-west along the southern section of Rowlett, and the city is also along the relatively new President George Bush Turnpike toll road that serves the Dallas region and has four exits in Rowlett.

“I give credit to area visionaries in the 1980s who started thinking about rapid transit back then,â€ says Mark Enoch, DART board member representing Rowlett, Garland and Glenn Heights. “Today, Rowlett passengers can get to downtown Dallas in about 30 minutes on the train, compared to 45-60 minutes driving on a busy day.”

Enoch says the downtown terminus is helping that part of the city grow, with adjacent attractions like the 900-unit Village of Rowlett apartment complex and popular businesses such as Bankhead Brewing Co.

“Not too long ago, our downtown was a forgotten area with retailers struggling to keep their businesses open,â€ he says. “But ever since the train station opened, property owners started refurbishing their buildings and the city began putting money into infrastructure and other improvements. A real metamorphosis is occurring downtown with commercial interest taking off, with the DART train acting as an economic generator.”

Enoch adds that the younger generation is especially receptive to the idea of riding the DART train.

“There used to be a saying of ‘One Texan, One Car,’ but millennials are very open to public transit,â€ he says. “We’re looking at ways to get ridership up among all ages. Slowly but surely, the ridership numbers are increasing.”

Meanwhile, aesthetics are also important here, including along main transportation corridors. This will only improve with a current State Highway 66 Beautification Project to landscape all medians along the entire SH66 corridor.

To pay for the large project, Rowlett in 2014 won a $250,000 Governor’s Community Achievement Award from the Texas Department of Transportation to beautify a state highway within the city. However, Rowlett officials also learned of a TxDOT Green Ribbon program to provide more than $2 million in additional funding to Rowlett for the project.

“Green Ribbon started in the mid-1990s but has been used very little, even though the Texas legislature puts millions of dollars into it every year,â€ says Martha Brown, executive director of Keep Rowlett Beautiful. “Not many people know about the Green Ribbon fund, but we thankfully heard of it from Stephen Copley, a project manager and landscape architect with TxDOT. Now, having more than $2.2 million to spend on SH66 was amazing.”

After more than two years of planning and state approvals, the SH66 beautification was finally launched in 2017.

“The landscape design was coordinated between our city council, parks department, street department, planners, Keep Rowlett Beautiful and many others, with the decision to have native plantings of trees, shrubs and flowers along the entire stretch of Highway 66 rather than grass,â€ Brown says. “TxDOT has also repaired curbs, improved power hookups and installed a modern irrigation system. In fact, our parks department will be able to monitor moisture levels on every median from their offices.”

Besides planting selections along the corridor such as autumn sage, Texas redbuds, crape myrtles and high rise live oaks, other improvements include entrance monuments at each end of SH66, with the name “ROWLETTâ€ designated on one side. The entire beautification project is scheduled for completion in late 2018.

“The TxDOT contractor will maintain the entire stretch for the first year to make sure all the plants get established, then our parks department takes over from there,â€ Brown says. “I drive up and down State Highway 66 every day to get to my office, and it’s been a joy to see it all come together.”