10 Things to Do in San Antonio, TX 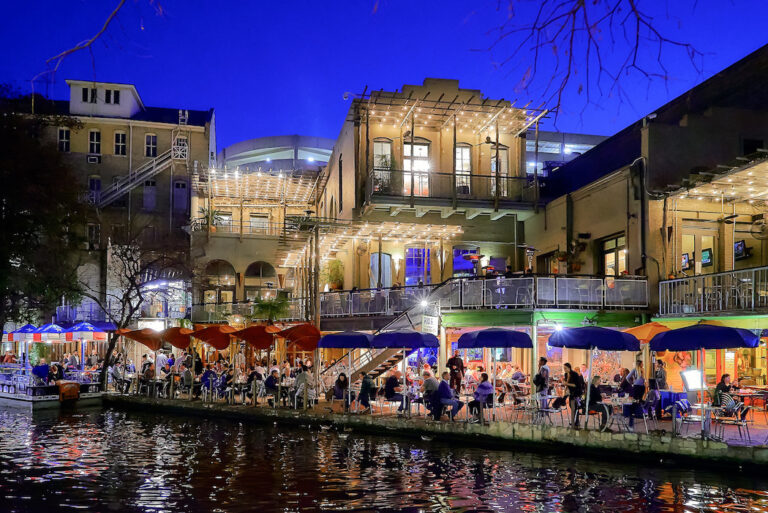 San Antonio / Courtesy of Pedro Szekely under a CC 4.0 license.

Also known as Paseo del Rio, San Antonio River Walk is a network of pedestrian walkways situated one story beneath the city’s downtown streets, along the banks of San Antonio River. The River Walk is lined by restaurants, shops and bars, and one of the more popular activities is boat rides along an inlet canal.

The Alamo Mission stands as a museum in downtown San Antonio, welcoming more than 4 million visitors each year. The famous landmark is renowned for the role it played during an epic 1836 battle in the Texas Revolution, and tourists today have access to a chapel, former soldier barracks, and a large mural entitled Wall of History.

The oldest theater in San Antonio is Majestic Theatre, which opened in 1929 and today has seating for 2,311 patrons. It houses the San Antonio Symphony and hosts classic movies along with concerts, stand-up comedians and famed lecturers. The building is known for its architecture and amenities, including a massive cast-iron canopy covering the sidewalk.

Open from March to January, Six Flags Fiesta Texas welcomes hundreds of thousands of fun-loving tourists each year who want to experience thrill rides and roller coasters. On site are 49 rides that include eight roller coasters and nine water rides, with names like Poltergeist, Pandemonium, Goliath, and Iron Rattler.

Since 1981, San Antonio Museum of Art has graced the River Walk downtown district, complete with its own Café des Artistes restaurant that overlooks San Antonio River. Art on exhibit includes pre-Columbian, Spanish Colonial and Latin American paintings along with Greek and Roman sculptures, plus a collection of Chinese ceramics.

Fresh air is in abundance at Brackenridge Park, with attractions like the San Antonio Zoo, Japanese Tea Garden and a Sunken Garden Theatre. The outdoor refuge also welcomes thousands of sun seekers to Lambert Beach throughout the warm-weather months. In addition, there is a Playscape playground and a Tony “Skipper” Martinez softball field.

Built in the mid-1700s, Spanish Governor’s Palace is a one-story masonry and stucco building originally intended to protect the nearby Alamo. It is open to the public as a museum, and the Spanish Colonial-style abode features 10 period-decorated rooms along with a large courtyard and a fountain that supposedly is haunted.

9. Tower of the Americas

Spanning 750 feet high, Tower of the Americas is an observation tower and restaurant located at HemisFair Park in the downtown district. It remains the tallest building in San Antonio, with the observation deck accessible by elevator for an admission charge. A revolving restaurant at the top of the tower offers great views of the city.

On the campus of the University of Texas at San Antonio is a museum called Institute of Texan Cultures, which offers exhibits and 3.5 million photo images devoted to multicultural topics. The Institute hosts an annual Texas Folklife Festival that celebrates the many ethnicities represented throughout the state.