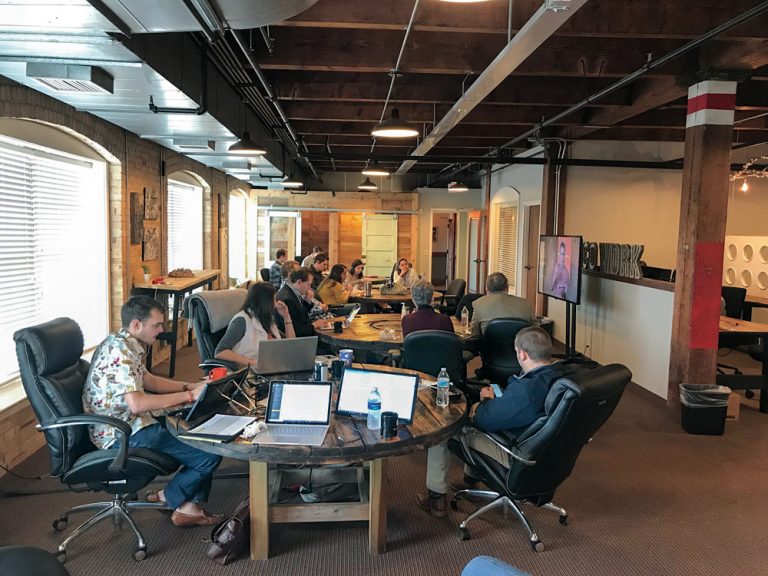 According to a Bureau of Labor Statistics study, by the year 2020, nearly half of the workforce – some 60 million people – will be independent workers, freelancers and contractors. Cities around the country are already seeing an uptick in these types of entrepreneurial workers, which is why Joshua Ebright and Blake Moser were inspired to start Co.Work, a space for individuals to work and network outside a traditional office.

“As more people enter the gig economy, the question becomes ‘Where do I work? Do I work from home?’ Working from home has some advantages, but it also has quite a few disadvantages, and co-working bridges that gap between working in an office for a company versus working at home solely,â€ says Moser, co-founder of Co.Work. “Co-working allows you an area to network – to plug in with other people who are trying to get a job done – and to collaborate with them. Co-working offers a place to gather for entrepreneurs, freelancers and the virtual workforce.â€

Moser says co-working is a fairly new concept. The idea began to gain popularity around the turn of the 21st century and spread rapidly around the country.

“Shared office space is another way to describe co-working, and Tyler was lacking those shared spaces. There wasn’t a co-working center here,â€ Moser says.

“Co-working centers are important to communities like Tyler that have a college or university presence,â€ Moser says. “Once students graduate, they’re leaving to move to larger cities to start businesses or careers. Co.Work gives them the resources that they need to grow a business. Co-working centers act as an incubator, to some capacity, because when you come into a co-working center, you’re working with other vetted entrepreneurs, business owners and freelance workers or virtual workforce, and when you’re plugged into that community, you can find jobs.â€

Moser says co-working centers can often offer a springboard for new entrepreneurs as well as seasoned entrepreneurs who are growing their businesses. Organizations such as Co.Work give them a place to recruit talent and hire people from within the community and also helps when they’re recruiting from outside the community.

“From a cost standpoint, co-working limits the risk for entrepreneurs just starting out,â€ Moser says. “Economically, that trickles down, because that risk isn’t taken on from early entrepreneurs, and you’re not extending yourself too quickly so that you have a better chance of growing in the right time rather than growing too fast at the wrong cost.â€

Moser says another of Tyler’s advantages is its enviable quality of life.

“Tyler has a very low cost of living, and the income tax, state income tax as well as property costs are reasonable compared to other parts of the nation,â€ he says. “Tyler is also on the cutting edge when it comes to offering innovation in a community setting, where people can access it for a very low cost but get very high quality out of the community.â€

Coworking centers act as an incubator, to some capacity, because when you come into a coworking center, you’re working with other vetted entrepreneurs.