In Tyler, TX, everything's coming up roses, especially during the month of October. 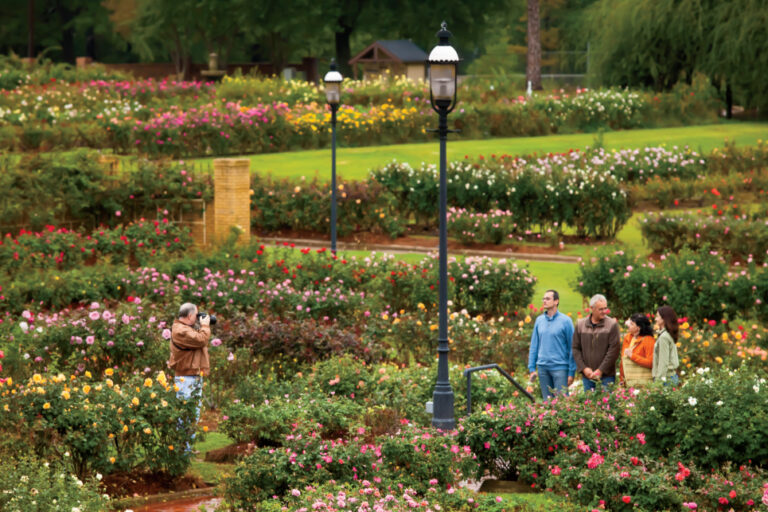 In Tyler, TX everything’s coming up roses, especially during October – officially designated Rose Season – when special events take place all month long. The season reaches its pinnacle with the pomp and ceremony of the Texas Rose Festival.

The annual festival, which began in 1933, opens the third weekend of October on Thursday with a ribbon cutting and prayer service, followed by the Rose Show at the city’s elaborately decorated Rose Garden Center. Tyler’s is the largest municipal rose garden in the United States, with 32,000 rose bushes and 600 cultivars, all at their peak in October.

“The garden is always perfect, always pristine at that time of year,” says Julie Dawson, executive director of the Texas Rose Festival.

“It’s kind of like a Broadway show,” Dawson explains. “We have lights. We have music. There’s dancing, entertainment, and of course, the costumes. The artistry in the costumes is absolutely unbelievable. It’s fabulous to see them under the lights.”

Saturday brings the Texas Rose Festival Parade, followed by the Queen’s Tea in the Rose Garden, when children can meet and have their pictures taken with the queen and princesses.

“The reason I like the Queen’s Tea is because you get to stand up close to those costumes and see the things you might have missed at the coronation,” Dawson says. Costumes from yesteryear and other memorabilia are always on display at the Texas Rose Festival Museum.

About 32,000 people attend the Texas Rose Festival itself, and Rose Season events draw thousands more – approximately 77,500 tourists from outside Smith County – making for an overall economic impact of $2.4 million, according to 2012 figures.

“Since we turned it into a monthlong celebration, it has gradually increased the economic impact every year,” says Susan Travis, assistant vice president of Tourism/Servicing at the Tyler Convention and Visitors Bureau. “It has a significant impact for our city.”

It makes sense to celebrate roses in Tyler. Its rose industry produces one-fifth and processes three-fourths of the nation’s rosebushes. Furthermore, roses beautify private gardens, street medians and public spaces throughout the city. “Having an icon like the rose that people think of when they think of your city,” Travis says. “I mean, how great is that?”