The Tyler, TX restaurant scene is ... in a word – eclectic. 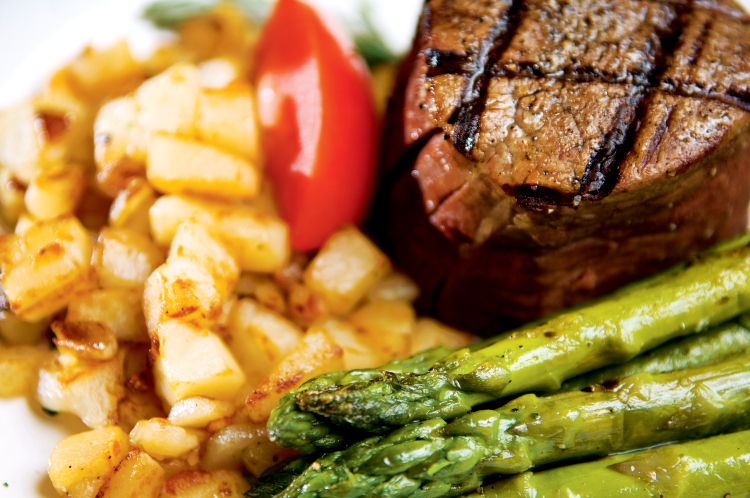 Steak and authentic Mexican food are staples in Tyler, TX. But the city’s restaurant scene also includes a diverse array of other tasty options, including a brand-new Asian fusion restaurant.

Since 1992, one of the most popular restaurants in town has been Rick’s On The Square. As the name suggests, Rick’s is located in the heart of downtown Tyler. On the plate, Rick’s specializes in steaks (the chipotle rib eye is a local fave), seafood, wine and house-made desserts. Menu items range from the basic burger to the exotic barbecued smoked-shark tacos. As for the atmosphere, Rick’s is upscale enough to resemble a fine-dining experience, yet still casual enough for live music on the patio. Sports fans will enjoy watching the game on one of the patio’s three 46-inch flat-screen TVs, while those with the late-night munchies can order off the full menu until closing.

Known for its reliably good food and quietly sophisticated atmosphere, Dakota’s is the go-to destination for steaks in Tyler. Whether you are looking for a NY strip, rib eye or filet mignon, all of Dakota’s steaks are hand-cut from USDA Prime and mesquite flavored on a 1,600-degree grill to preserve the juices and flavor.

Steaks are just one of many menu items at the appropriately named The Potpourri House, which features primarily American entrees that also include salads, burgers, seafood, pasta and chicken prepared in many ways. Try the chicken crepes for lunch after scoping out the gift shop and boutique also located there.

You’ll also find steaks at Jake’s Tyler, but the specialty is Atlantic Blue Point Oysters, served on the half shell or by the half dozen. The restaurant also carries a lot of oysters from the East Coast – Chesapeake Bay, Maine and Virginia – and Northern Canada. Other seafood favorites include jumbo lump crab cakes, Sesame-Seared Ahi Tuna with basmati rice and garlic sautéed sugar snap peas, and Australian Cold-Water Lobster Tail with grapefruit buerre blanc, orzo pasta and sautéed spinach.

Another favorite spot for steaks and seafood, is Breakers, which features an island-style atmosphere and menu favorites that include ceviche, shrimp and grits, and oysters.

One of the city’s true food destinations is Kiepersol Estates, which is a combination restaurant, winery, and bed and breakfast. The business casual restaurant features high-quality steaks and seafood. Tours of the winery and vineyard are available and include a visit to the tasting room.

Bernard’s Mediterranean Restaurant, a family-owned and -operated restaurant on Grande Boulevard, earns rave reviews for both its wine list and its French, Spanish and Italian-inspired dishes, all of which complement the distinctly European atmosphere. The seafood options are especially well regarded, though the Filet Mignon Bearnaise is also quite popular, as are veal and chicken entrées.

Meanwhile, a more casual option for Greek and Mediterranean food, What About Kabob & His Gyros, located in River Oaks Plaza, serves kabobs, gyros, burgers, pita chips and hummus, and much more.

Mario’s Italian Restaurant & Club opened in 1977, so expect an Old World Italian family feel, with reasonably priced, stick-to-your-ribs food. Specialties include the shrimp and chicken Primavera, the grilled veal Romano and the Venetian chicken. The low lighting contributes to the cozy atmosphere, as does live music, which can be heard on Fridays and Saturdays.

Bruno’s Pizza and Pasta, family-owned and operated 80-seat pizzeria, serves up handmade pizzas loaded with toppings and an exceptional lasagna that keeps customers coming back for more.

For more than a decade, Julian’s has been a favorite Tyler destination – for food, entertainment and martinis. Now the Schulz family has a new concept, Juls, a restaurant, lounge and café that opened in December 2013. The two-level, 10,000-square-foot restaurant features a spacious dining room with high ceilings and wide windows, not to mention a sushi bar, lounge, DJ room, lakefront patio and two private rooms designed to accommodate parties of 10-50 people.

Most diners regard Currents’ new location on south Broadway as superior to the old. What hasn’t changed is the elegant and contemporary French and American cuisine, which has delighted Tyler residents for more than 17 years. Salmon, sole and sea bass are core entrées, as is the veal tenderloin. Come for a casual lunch or a romantic dinner, or reserve the entire restaurant for a private party.

French pastries can be found at Chez Bazan, which specializes in cakes, pies, cookies and breads. The restaurant also creates some extravagant wedding cakes.

Loggins Restaurant is a family-owned, buffet-style establishment that has been in Tyler for more than 40 years. Only open for lunch,  is good ol’ Southern-style cooking, renowned for its fried chicken, pies and puddings.

The Blue Noonday Store, located on State Highway 155, combines a meat market with a restaurant, where customers can buy fresh rib-eyes, filet mignon and New York strips to cook at home or enjoy lunch right in the store. The store, which opened in 1991, serves plate lunches of the traditional meat-and-three-vegetables variety (with dinner roll or cornbread, of course), as well as hamburgers, cheeseburgers and chicken sandwiches. People know to show up for the best-selling beef tips on Thursdays and Saturdays, and patrons also rave about the restaurant’s sweets, which include cobblers, banana pudding, cookies and brownies.

Of course, it wouldn’t be Texas without a good local barbecue joint, and Tyler’s is Stanley’s Famous Pit Bar-B-Q. Texas Monthly magazine has proclaimed Stanley’s to be one of the 50 best barbecue restaurants in the state.

Stanley’s has been family owned and operated since the 1950s. In addition to the standard pulled pork sandwich, the restaurant offers some interesting combinations such as the Brother-In-Law (grilled hot link, chopped beef and cheese) and the Big Swimmer (tilapia on a jalapeño-cheese sourdough bun, topped with guacamole).

Villa Montez is a casual family dining restaurant that brings the best of “Cocina Latina” Latin kitchen. The menu features the freshest ingredients and the sauces are made daily in house, and there are more than 100 entrees, appetizers, sandwiches and wraps to choose from.

Don Juan’s Mexican Restaurant and Cantina has long been a Tyler staple. The dishes have more of a traditional Mexican flavor rather than the Americanized version of Mexican food. The tacos are particularly popular, especially on Wednesdays when they are sold for a dollar a piece.