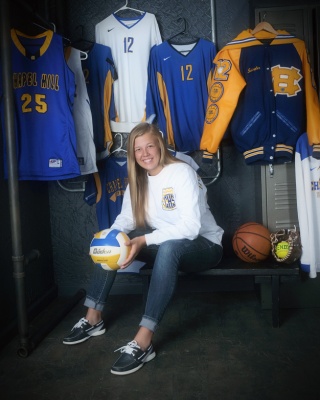 LeTourneau University freshman and star volleyball player Schuyler Wages has to work harder than other students. She has to wear hearing aids due to partial hearing loss and is nearly blind in her right eye. She’s also dyslexic – though that didn’t stop her from graduating from Tyler’s Chapel Hill High School with a 3.8 GPA. That perseverance was one of the qualities that helped the teen beat out some 75 other athletes for the first Earl Campbell Tyler Rose Award scholarship to be given to a high school student.

The Earl Campbell award is named for Tyler native Earl Campbell, who graduated from John Tyler High School in 1974 and won the Heisman Trophy while attending the University of Texas. He then went on to enjoy a successful career in the NFL, but he always kept ties to his hometown. The award and scholarship is a way to pay tribute to the city that helped launch his career.

“Earl and his sons and family are very passionate about helping the student athletes in our town and surrounding areas. They wanted to add a piece to the award and give back to the community, so the scholarship was set up to be given to a graduating high school senior from Smith County who was involved in athletics and had a desire to further his or her education,” says Cindy Smoak, vice president of SPORTyler.

The scholarship was established in 2012 by the Tyler Chamber and SPORTyler to recognize the Division I football offensive player who exhibits the integrity, performance, teamwork, sportsmanship and drive associated with Earl Campbell and his legacy. Awardees are also traditionally Texas natives or athletes at a Texas college or university.

“The award idea was brought to our attention by our city manager at the time, Mark McDaniel, who thought we should come up with a way to honor our hometown hero, Earl Campbell,” Smoak says. “We had several other things in the works, but this idea just made so much sense and we began discussions with Earl and his family about the award. After more than two years of research and talking with Earl, our committee came up with the current award and criteria. Its first year presented was the 2013 college football season.”

Smoak says the high school award and $5,000 scholarship encourage students to succeed on and off the field. Recipients must participate in varsity athletics during their senior year in high school but are not required to play a sport in college.

Wages played volleyball, basketball, softball and was on the track team while at CHHS. She was also a member of the Student Senate and National Honor Society. She applied the scholarship to her tuition at LeTourneau.

“The Earl Campbell Award and others like it are so important to athletes like me. I decided to go to a Division III college to play volleyball, and these schools can’t give scholarships to athletes to play sports,” Wages says. “Without this scholarship, I could not have attended LeTourneau University. It has given me an opportunity to achieve my dream, which was to play college volleyball. Receiving this scholarship showed me that I was an athlete both on the court and in the classroom, and meeting Earl Campbell and his family was a wonderful experience. They are loving people, and I can’t thank them enough!”

Receiving this scholarship showed me that I was an athlete both on the court and in the classroom, and meeting Earl Campbell and his family was a wonderful experience. They are loving people, and I can’t thank them enough!