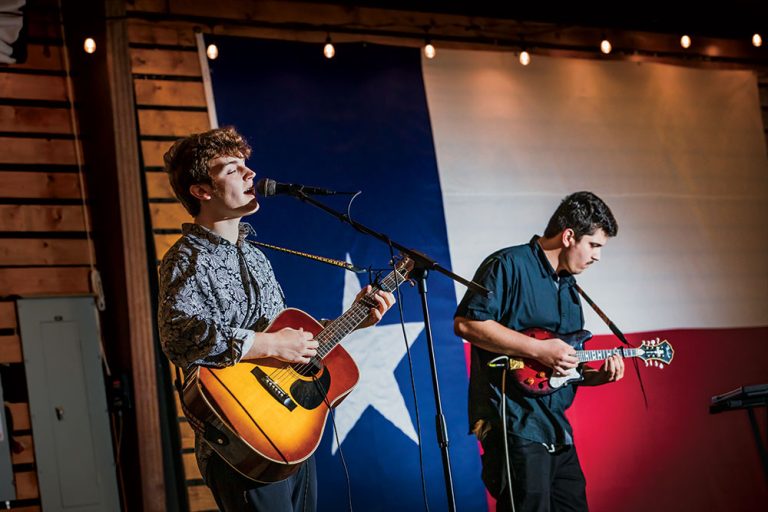 When Tyler receives the Music-Friendly City designation from the state of Texas, it will be validation of what everyone who has stepped out on the town here already knows: Tyler’s live music scene rivals that of much larger cities.

The thriving music scene also benefits Tyler’s economy. The Texas Music Office notes that the music industry’s economic value is quite substantial: In 2017, it generated more than $19 billion, including more than 178,000 jobs around the state. Tyler residents support the businesses behind the music scene – the venues, recording studios, merchandising companies and music shops – as well as provide an exuberant fan base for the musicians.

The City of Tyler’s strong support of the arts shows in its renovation of Liberty Hall, a historic landmark in Downtown Tyler that has excellent acoustics and around 300 comfy seats. Musicians who have played here include Ruthie Foster, Marc Broussard, Sgt. Peppers Beatles Tribute Band and Monte Montgomery, just to name a few.

The city also holds music events at Bergfeld Park Amphitheater and on the second Saturday of the month downtown from 2 p.m. to midnight as part of its Hit the Bricks program.

The substantial Oil Palace covers 85,000 square feet with 7,000-plus seats and a capacity of 9,000. In addition to comedy and spoken word, it has recently hosted popular Latino music, country music with Travis Tritt and Charlie Daniels Band’s Outlaws & Renegades Tour, blues with Robert Cray and contemporary Christian’s MercyMe.

Southern rock and country are generally what’s on the music menu at Texas Music City Grill & Smokehouse. Think artists like Blane Howard, the Dagnabbit Band, Darrin Morris Band and Crystal and Will Yates. The venue throws in a few surprises such as the East Texas Jazz Orchestra.

The big stage at Clicks Live is home for a range of rock, blues and hip-hop acts along with acoustic sets that recently included Coby Wier, Tyler Dudley and Sean Berry, Edge of Misery and Tombstone Wasteland.

Live music plays almost every day at The Cannery’s six different music venues that include the Main Stage with a capacity of 10,000 and the Picker’s Pavilion that can accommodate approximately 1,800. This past spring, Koe Wetzel’s Incredible Music Festival more than satisfied an audience of 7,000. Countryfest is on tap here in October 2019.

The Red Dirt BBQ & Music Festival each May has sold out six years in a row. Celebrated barbecue chefs craft their specialties while music plays on two stages. The live music lineup includes the likes of Stoney LaRue, Mike and the Moonpies, Randy Rogers Band and Wade Bowen.

True Vine Brewing Company offers live music on Friday and Saturday evenings that is mostly indie and alternative bands and singer-songwriters, with occasional blues and country acts. Big names play here but True Vine keeps it mostly local. At its fifth birthday party, the lineup was Matt Raker, Big Funky Cloud, the Magills, Gorgeous Jetson and the Brothers and Sisters, which had all previously played at True Vine.

Meanwhile, it’s easy to catch live music any given night of the week on restaurant patios across the city. Just check the events calendar on visittyler.com or download the free Gig Guide.