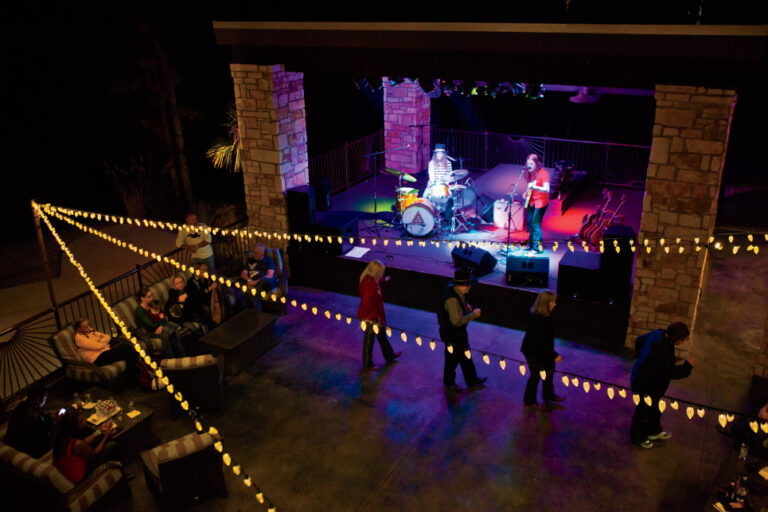 Naturally, a city known for its sweeping rose gardens, blue-ribbon barbecue and picturesque landscapes can’t help but draw visitors to bask in its charms while the sun shines. Yet Tyler’s also blooms deep into the night, with revelers taking to concert halls, dance haunts, honky-tonks, and even piano-and-sports bars.

From foot-stomping, full-house concerts at The Oil Palace to handcrafted cocktails shared over quiet corner tables at Cork, Tyler offers more than enough variety to please divergent tastes. Locals and visitors alike have picked up on the vibrant vibe of the city after dark.

“Nightlife in Tyler is growing, especially with more and more chances to hear great music every year,” says John Wesley Peck, a 20-year resident. “The folk scene is getting a lot of attention, and local bands are making their mark; lots of places have open mic nights” to give local talent a chance to shine. Peck’s favorite nightspots in town include Cork and Lago del Pino. “If you’re looking for more low key and fun at night, check out Stanley’s,” he says.

Here are glimpses into some of the hottest after-dark spots in Tyler:

The dinner menu at Lago del Pino (Spanish for “lake of the pine”) is nothing short of mouthwatering, but so is its lineup of live music on the patio on Friday and Saturday nights. The offerings, for those 21 and over, include country and pop to Latin and R&B.

The specialties at Cork extend beyond its savory dinner menu to its expansive wine list and, perhaps most notably, its crafted cocktails: four- to five-step concoctions full of fresh ingredients – a perfect complement to Cork’s live music, DJs and late-night dancing opportunities.

Coach’s and Cowboy’s, as the name suggests, is really two hot spots in one: a sports-themed bar and grill in one building and a boot scootin’ club in another, connected by a common courtyard, complete with an in-ground swimming pool. Dance on one side, whoop it up with fellow fans on the others. It’s a win-win.

Known for its elegant ambiance, Jake’s in downtown Tyler serves up steak and seafood. Oysters on the half shell? Oh, yes – alongside an array of wines, brews and mixed drinks. Consider Jake’s Chaveta, a romantic rooftop lounge, for a more intimate dining experience.

Rick’s On the Square is about as eclectic as it gets. Upscale meets casual here; it’s perfectly acceptable to cheer for your team on the patio’s big-screen TVs while puffing a premium cigar and oohing over smoked-salmon cheesecake. The menu’s surf-and-turf Americana fare spans choice rib-eye steaks to halibut and sea bass.

Any place where the closing times are listed with question marks — as in 3 p.m. to ? — has serious nightlife potential. That’s the case at Tyler icon Stanley’s Famous Pit Bar-B-Q, where the kickin’ pork, brisket and ribs are matched only by the spicy night scene. Owners Nick and Jen Pencis are keeping alive a rich tradition started by the original Stanley, garnering numerous recent accolades including Texas Monthly‘s Best BBQ Sandwich in Texas (2014) for its Mother Clucker.

One of the city’s newer venues, The Keys, a dueling piano and sports bar, which opened in early 2013, caters to more grown-up tastes, with its entertaining range of live music, drink specials and culinary variety.

Sunshine or moonlight? Take your pick. Tyler is intriguing by day and downright incandescent by night.