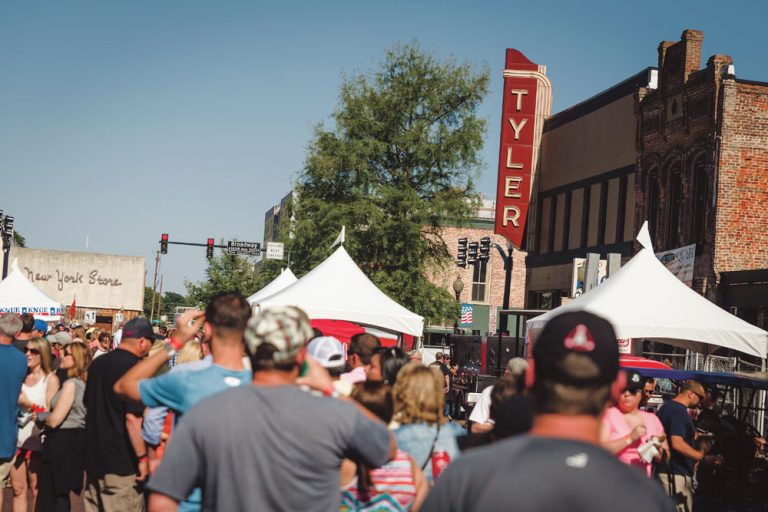 While Tyler, Texas is no doubt an economic hub for northeast Texas, there’s much more to this area than commercial activity. Local mom bloggers and Tyler area residents new and old share their “must-sees” and “must-dos” for family fun.

Jennifer Wharton is a mother of three children, ages 12, 10 and 5. A recent transplant, she has already made it home.

“It’s a great place to raise a family,” she says. “There is no shortage of things to do with your family on most weekends, whether that’s paying for iJump sessions or visiting all the free events for kids at Bergfeld Park during the summer.”

Speaking of events, Wharton and her family enjoy frequenting downtown ones.

“We go to almost every ‘Hit the Bricks’ hosted downtown on the second Saturday of every month,” she says. “We’ll visit the shops downtown, see a movie at Liberty Hall, and grab a bite from some of the local food trucks.”

Wharton says food trucks provide a change of pace and are “a fun way to switch things up now that food isn’t limited to the confines of a restaurant.”

A City On the Move

Looking forward, Wharton says Tyler is very much a city on the move.  For example, Times Square Cinema’s entertainment center is currently in the works. Plans call for a venue with a 22-lane bowling alley, laser tag, games and a full restaurant and bar.

“By the end of the year you’ll be able to go to the movies, grab a bite to eat at a nice restaurant, let the kids bowl or play laser tag all in one place,” she says.

Katy Payne grew up in Lindale and has lived in the Tyler area for the last 12 years, but the amenities are still novel, she says. The mother of three says her family is active and always looking for adventure.

“My family enjoys the Rose Rudman Recreational Trail for biking and roller blading,” she says. “Also, Noble E. Young has a skate park that is pretty neat. My husband loves disc golf, and there are several courses in Tyler that make for a fun outing.”

In addition to Wharton and Payne’s recommendations, Tyler boasts many other kid-friendly destinations, both indoors and outdoors. For example, Tyler Public Library’s new maker space encourages learning and exploring in the areas of STEM/STEAM.

Residents can get up close and personal with animals at the Caldwell Zoo. The zoo completed a renovation last year that includes a new giraffe-feeding deck that allows visitors to hand-feed the giraffes.

Bottom line: Boredom is not a word in Tylerites’ vocabulary.

With myriad amenities and attractions, it’s no wonder the area is booming. Kyle Smith of Real Edge Real Estate (and last year’s chairman of the board for the greater Tyler Association of REALTORS) knows this firsthand. He says the Tyler real estate market has been “extremely active” for the last five or six years, each year topping the previous.

As for 2018, he anticipates another banner year.

“Interest rates are affordable, and while home prices are creeping up, they are still manageable and there’s not been an issue with affordability for most of our market,” he says.

Certain types of homes are more in demand than others, he notes. For example, he says the Tyler area is seeing an increase in sales for homes in communities with golf courses, lakes or community activity centers.

“We have numerous well-known golf course communities, and they have attracted a loyal following of golfers who eventually move to the Tyler area,” he says,

The condo lifestyle is also in demand.

“We’ve started to create more diversity with building more condos,” he says. “We had a few condos here starting about 12 years ago, but we’re starting to see more development along those lines.”

Additionally, he says, neighborhoods with larger lots are sought after.