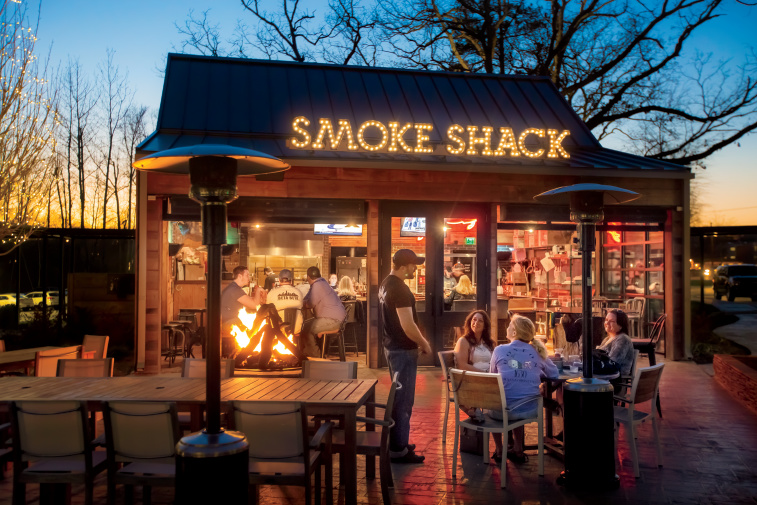 Whether you’re craving oysters from New England or a salad made with vegetables from the garden next door, Tyler’s vibrant and diverse restaurant scene will not disappoint.

Set on 5.5 acres in the middle of the city, the Grove Kitchen & Gardens brings the farm-to-table movement to Tyler. The Grove Kitchen’s menu features dishes made with fresh ingredients sourced from local East Texas growers as well as from the restaurant’s sprawling garden. Menu favorites include a double bone-in pork chop and Jidori roasted chicken.The restaurant serves its side dishes family-style, which means diners can serve themselves from heaping bowls of fresh vegetables such as asparagus, brussels sprouts and goat cheese au gratin potatoes. The grounds double as an event space; the Grove’s Greenhouse and backyard amphitheater are perfect for weddings, family gatherings or corporate events. Owner Michael Herd also takes time to give back to the community. On Thanksgiving, the restaurant donates a turkey to all 1,300 of the city’s teachers.

Oyster lovers no longer need to drive to Dallas to get their fix. One of the city’s newer restaurants, the Black Pearl oyster bar opened in Downtown Tyler in 2016. It sits next door to owner Rick Eltife’s Rick’s On the Square. The Black Pearl dispels the myth that oysters should only be consumed in months that end in the letter ‘R.’ In fact, the bar serves fresh oysters from off the coast of New England. The Black Pearl’s menu also features seafood favorites, such as snow crabs, crab cocktail and lobster bisque, along with an impressive beer, wine and handcrafted cocktail selection. The Black Pearl is a traditional shotgun bar in that there are no tables. Diners sit side-by-side along the counter that’s less than 16 feet long, which allows the bartenders to interact with customers.

Featured on Guy Fieri’s Diners, Drive-Ins and Dives television show, the Twisted Root Burger Co. has a rich history in Texas. The franchise started in the Deep Ellum neighborhood of Dallas before branching out to 19 other locations, including the South Broadway location in Tyler. Twisted Root serves up more than half a dozen variations on the traditional beef and turkey burger, including a turkey burger with goat cheese, kale pesto and mixed greens piled on top. The restaurant’s menu also features vegetarian burgers and burgers made from buffalo and other game (when in season), such as elk, alligator, kangaroo, ostrich, boar and even beaver. A gluten-sensitive menu is also available. No burger is complete without a fried side dish; diners can choose from traditional French fries, sweet potato chips, fried pickles or flash-fried veggies.

Freddie Mae’s Original Home Cooking & BBQ gives Southern soul food a Texas twist. Open from 7 a.m. until 7 p.m., Freddie Mae’s professes to serve the “best country breakfast in Tyler.” Breakfast menu items include made-from-scratch buttermilk biscuits and gravy, pork chops and eggs, chicken and waffles, and fried catfish and grits. If you can’t make up your mind, have a sampling of everything on the breakfast buffet. For lunch and early dinner, the restaurant serves up slow-smoked barbecue pork, brisket, hot links and sausage. Freddie Mae’s menu also features recipes passed down two generations, with the chef’s take on Southern classics such as chicken and dumplings, chicken fried steak, neck bones, and liver and onions.