Skip to content
Home > UT > Experiences & Adventures > If You Love Dinosaurs, You Need to Plan a Visit to This State

If You Love Dinosaurs, You Need to Plan a Visit to This State

"Suddenly, everything you’ve watched and heard about dinosaurs becomes real." 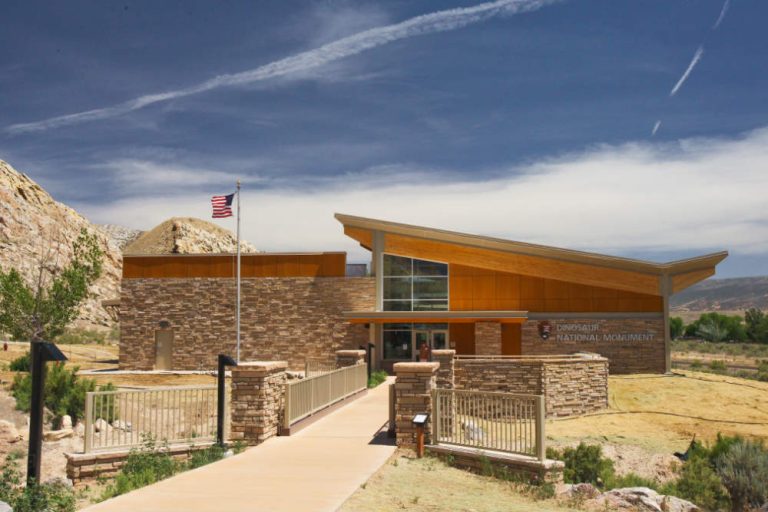 Time travel isn’t real (yet). But if you want to feel like you’ve traveled back to the late Jurassic Period, you need to take a trip to Vernal, UT.

Vernal and the surrounding Uintah County is collectively known as “Dinosaurland.â€ If it sounds like a dinosaur-obsessed kid’s dream come true, that’s because it is.

This city in northeastern Utah is proud of its prehistoric predecessors. Look no further than the larger-than-life pink dinosaur (you can call her Dinah) who welcomes visitors when they arrive in Vernal. The real draw, though, are the remnants of real-life dinosaurs preserved throughout the area, including fossils you can touch at Dinosaur National Monument that connect you with a 149-million-year-old history.

“When you walk through the door, all of a sudden everything you’ve watched and heard about dinosaurs becomes real,â€ says Lesha Coltharp, director of tourism for Uintah County. “You realize, ‘Wow, that leg bone is bigger than me!’â€

For Coltharp, dinosaur tourism is a family affair. Her father drives the shuttle that takes visitors from the visitor center to the exhibit hall in Dinosaur National Monument. Her grandfather once operated the gift shop, and, as a teenager, Coltharp worked alongside him during the height of the “Jurassic Parkâ€ movie craze that brought droves of dinosaur enthusiasts to Vernal.

A star amenity here is the Quarry Exhibit Hall, which is inside Dinosaur National Monument and home to roughly 1,500 dinosaur bones. Among the fossilized inhabitants in the quarry exhibit is the Allosaurus, a near body double of T-Rex that’s a meat-eater with saw-like teeth; and the Stegosaurus, a plant-eating dino the size of a bus with bony plates lining its back. Other fossils come from Apatosaurus, Camarasaurus and Diplodocus. The fossils are embedded in the cliff face, and you can even touch some of them.

Another worthy stop on the dinosaur circuit? Red Fleet State Park, where the dinosaurs once roamed. The crimson-colored cliffs that look like they glow at sunset are an added bonus.

Paleontologists estimate the tracks in this state park to be more than 200 million years old, preserved in sandstone. The dinosaurs that roamed here were three-toed and walked on two legs, according to evidence left behind and researched by paleontologists. Park signs will point you in the direction of where you can find the dinosaur tracks, which are best viewed in the early morning or late afternoon because they’re tough to see when the sun is beaming down. A 1.5-mile hiking trail will deliver you to the tracks, or you can paddleboard or kayak to them during the summer months.

Also competing for attention is the Utah Field House of Natural History State Park Museum. Outside, 14 life-size dinosaur models loom in the Dinosaur Garden, surrounded by local desert plants. The towering T-Rex has a knack for making visitors feel as small as an ant. Inside, a 90-foot-long Diplodocus skeleton greets guests. A stand-out at the museum is the Fossil Lab, where visitors can learn about uncovering, casting and preserving fossils.

If time allows, there’s another way to travel back in time in this part of the state. At the McConkie Ranch, you can hike alongside petroglyphs (prehistoric rock carvings) from the Fremont culture, which flourished in the area from 1-1200 A.D. The family-owned ranch is private, but it’s open to the public with a suggested donation.

After hiking the one-mile loop, stop at the shed at the trailhead and let kids add their own message to the wall of Post-It notes left by tourists from around the world. Just don’t be surprised if it says, “Best vacation ever.”