Skip to content
Home > VA > Abingdon > Education, Careers & Opportunity > Tailor Made for the Task: How One Washington County Business is Changing Fashion

Tailor Made for the Task: How One Washington County Business is Changing Fashion 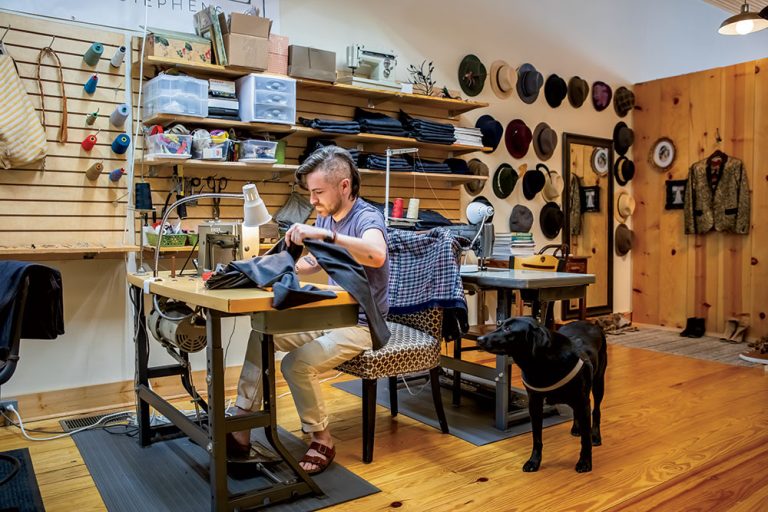 Slow fashion, a movement that focuses on creating quality clothing based on workmanship and sustainability, has a real visionary and champion in Washington County’s Stephen Curd of Lavelle Manufacturing.

Curd increasingly sees customers turning to Lavelle Manufacturing as they factor in quality and sustainability in making their apparel purchases.

“I think people are starting to realize that while it’s great to keep up with the trendy stores, you’re not making an investment in that purchase,â€ said Curd. “By investing in something of quality, you’ll get more out of that item than the $20 T-shirt that will probably be ruined by the end of the season.”

Lavelle Manufacturing creates custom clothing for men, women and children that is specifically tailored to each individual customer.

“You come in and want, say, a pair of custom jeans,â€ he explained. “We’ll do a full measurement and you can try on some samples that serve as a basis for our patterns. The process takes a couple of fittings, but you’ll get a pair of jeans that fits you almost perfectly.”

Curd credits his grandmother Eva Lavelle for his passion for sewing and fashion; she serves as the namesake for his company.

“She was the seamstress of the family,â€ he said. “She taught all of the boys how to sew. When I was trying to figure out what I wanted to do as an adult, she helped push me into this work and molded me into the designer that I am today.”

The designer studied menswear, tailoring and suiting at Lindenwood University in St. Charles, Missouri. After graduating in 2007, Curd moved to Chicago to start a production company where he staged fashion shows featuring other designers. Eventually, Curd struck out on his own in 2009 by creating his brand Garic Stephens. He began showing his collections at fashion shows, including New York Fashion Week, and began to gain notice.

Curd moved to Southwest Virginia in 2014 with plans to continue growing his clothing line.

“I wanted to do something in this area that people could invest in and that was affordable,â€ he said. “I tried to use local manufacturers at first but that didn’t work out.”

The designer launched another bespoke brand, Lavelle Denim, in 2015 and realized he was onto something when he sold 1,000 pairs of jeans. Looking to scale up his business, Curd won the Washington County Business Challenge, which resulted in a grant of $5,000. He used that money to purchase the first round of machines. A Kickstarter campaign raised an additional $11,000.

“People wanted to see this happen here and it did,â€ the designer said.

Meet the Entrepreneurs Of Washington County

Tailored to the Customer

Curd opened Lavelle Manufacturing in 2017, which includes a physical store and a manufacturing space.

Lavelle Manufacturing produces both of Curd’s brands. In addition to custom clothing, Curd creates accessories such as shoes, belts and bags.

“We dream up and make what you have in mind,â€ he said.

His customers, who travel to Glade Spring from across the South as well as from New York, Chicago and Los Angeles, are committed to his creations.

“People are starting to realize the importance of investment and what they’re spending their money on,â€ Curd said. “We make a lot of one-of-a-kind pieces. People who come and shop here know they are getting something that is tailored to them and they’re not going to find it mass-produced in a store.”