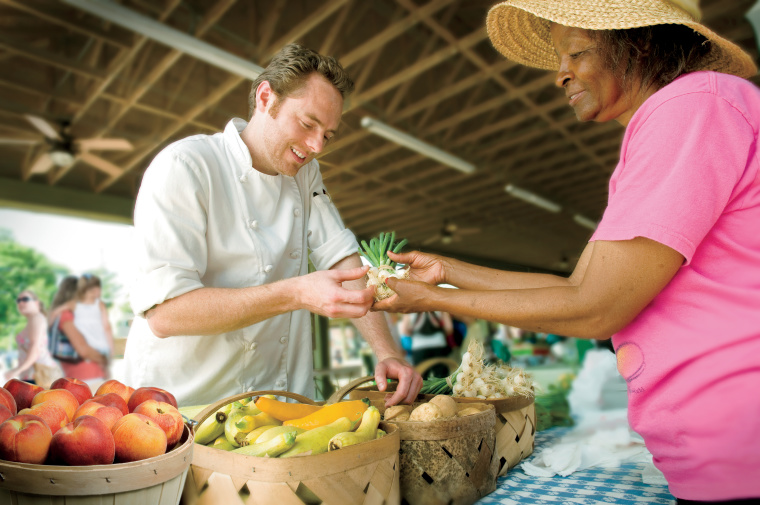 Abingdon / Courtesy of the CVB

To get an idea of what makes Washington County such a strong force in Virginia’s agriculture industry, begin by looking at the numbers.

The county has more than 1,600 farms, third-most in the Commonwealth, each averaging around 120 acres. The ag industry accounts for $76.5 million in market value for products sold, and employs 1,058 workers at $4.3 million in wages. Washington County is one of the largest livestock marketing centers east of the Mississippi River, with around $40 million in livestock sales annually.

Even those who may just be passing through can sense the county’s agricultural vibes as they travel down what is known as “tractor row,â€ a stretch of highway dotted with large farming equipment dealerships.

“What’s unique about Washington County compared to the rest of southwest Virginia is that it’s a regional marketing area for agriculture,â€ says Gene Copenhaver, senior vice president, regional supervisor over the agriculture division for the First Bank and Trust Company. “We have three large tractor and equipment dealerships that attract people from surrounding counties and even other states. Plus, the cattle market is one of the biggest in the state. It’s the biggest agricultural county in southwest Virginia and biggest in the state in terms of market value of products sold. A lot of dollars turned in this economy are through agriculture.”

A native of Washington County, Copenhaver has made his living in agriculture since graduating from Virginia Tech in 1983. In addition to his position with First Bank and Trust, he is also a full-time cattle farmer with 600 head of beef cattle.

While Washington County’s agriculture industry is driven by large equipment dealerships, tremendous cattle sales and other aspects of conventional farming, it is also becoming increasingly affected by the locavore movement and smaller operations.

The Abingdon Farmers Market is a case in point. Established in its current location in 2007, it has become the go-to place for people seeking locally grown meats, dairy and produce, as well as freshly prepared foods and various artisan creations.

Dwayne McIntyre, who has only been farming since 2015, became a vendor at the market to sell produce he and his family grow on their Goshen Homestead operation in Elk Garden.

“The farmers market is pretty fantastic,â€ says McIntyre, who is also farm manager for Roffey Cattle Company. “We started our own farm operation, and for a first year we did amazing business. We’re established at the farmers market.”

McIntyre says he can understand what his customers are seeking because he and his family were looking for the same thing in the food they were eating.

“I would say at least 75 percent of the business at the farmers market is people … (who are) seeking food that’s natural. They’re health-conscious customers and very well educated on how food is produced. The customer at the market leans toward supporting local food and small farmers.”

The Harvest Table Restaurant in Meadowview has taken the local farm movement to another level by establishing both a farm and a culinary destination for Washington County residents and visitors. It began as an extension of the book Animal, Vegetable, Miracle by the property’s director, Steven Hopp, and his wife, author Barbara Kingsolver.

In addition to what the farm itself grows or raises, most of the food served in the restaurant comes from local farms. The mission is to enhance the area’s farming culture.

“This isn’t as much a restaurant as it is an economic development project for the owners,â€ says Jason Von Kundra, the property’s farm manager. “It’s really exciting what I’m seeing develop with the demand for a local food system.”

What’s unique about Washington County compared to the rest of southwest Virginia is that it’s a regional marketing area for agriculture … A lot of dollars turned in this economy are through agriculture.