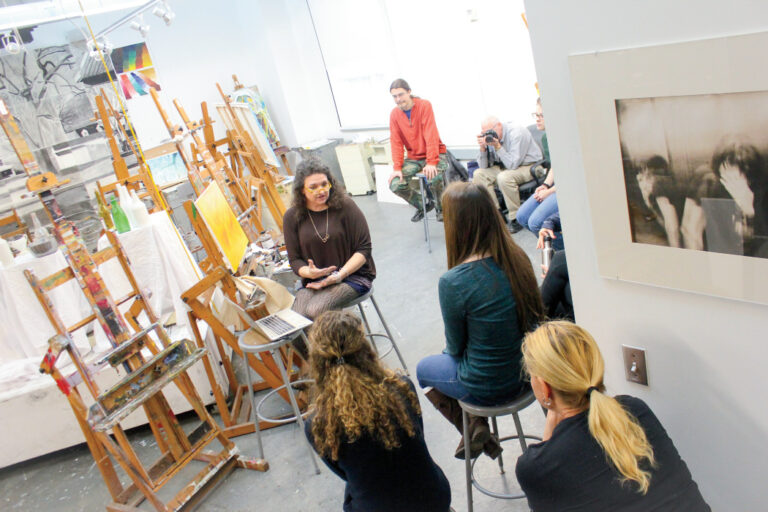 Since its founding in 1836, nationally ranked Emory & Henry College has shared a special relationship with Washington County, offering residents both academic and cultural opportunities that enhance the community’s quality of life. With the completion of the $20 million, state-of-the-art Woodrow W. McGlothlin Center for the Arts on campus, the college cements its role as a regional leader in visual and performing arts education.

The McGlothlin Center includes a 473-seat proscenium theater, a 120-seat black-box theater, the box office and administrative offices, an art gallery that showcases the works of guest artists, and campus radio station WEHC 90.7.

“In addition to that, there is also quite a bit of production space inside the building – the costume shop, the scene shop, large dressing room spaces, a green room – all the traditional production spaces will be a part of the building,â€ says Lisa Campbell, executive director of the McGlothlin Center. “And it will house all the faculty from the Department of Theatre. Before, all these entities were spread out across campus, and the new arts center brings them all together in one space.”

Campbell says the arts center is the result of years of planning by college administrators and shows a commitment to building even stronger arts programs – which include music, theater and visual arts – both on campus and in the community.

“The message has become loud and clear that administrators want to see even more growth in [the visual and performing arts] programs in terms of recruitment of students,â€ Campbell says. “What sets us apart here is we are blending a quality liberal arts education with a quality arts training. All of our faculty here are full-time and trained in the arts. They all have degrees in their fields. Many of them bring a lot of good real-world experience to the classroom. They’re not just academics. They’ve been out there, they’ve worked and they know what it takes to succeed.”

Emory & Henry’s theater department, for example, partners with the historic Barter Theatre in Abingdon. The Barter offers students internship opportunities and mentorships with Barter staff. Barter staffers also often hold workshops and master classes for theater majors and even teach courses at the college. Visual arts majors regularly exhibit their work at the Abingdon Arts Depot and on campus in the Byars Hall gallery, which is free and open to the public.

Campbell says prospective students will also be attracted to the McGlothlin Center’s high-tech infrastructure, which she says will be student-run.

“There is state-of-the art technology in this building, so for the students who are interested in studying in those fields, there are great opportunities for them to put their hands on that technology. It’s all digital based – whether it’s the lighting or the sound, everything is the most current technology that exists,” she says. “Our student workforce is much larger than our professional staff, and they’ll be doing everything from working backstage to helping with marketing and promotion.â€.

The larger venue also allows more opportunities for community engagement and education. The McGlothlin Center hosts an average of six music, dance and theater performances each year, and the gallery exhibits the work of six artists, who also spend time leading workshops for students and residents.

“We’ll be doing more outreach programs, primarily with the school system in K-12. For instance, when we bring in guest artists, there’s the expectation that they will also host a workshop or master class,â€ Campbell says. “We’ll be doing more talk backs and discussions of work, and I’d like to see us publish a guide that will dissect the work and provide more information for the audience. It’s an exciting time to be here, and we’re excited to show this facility off to the community.”

With the opening of the McGlothlin Center, there are even more hands-on learning opportunities for students. What we’re doing is adding the lab to the lecture.