Fall in love with the bountiful art and entertainment options in this Virginia region. 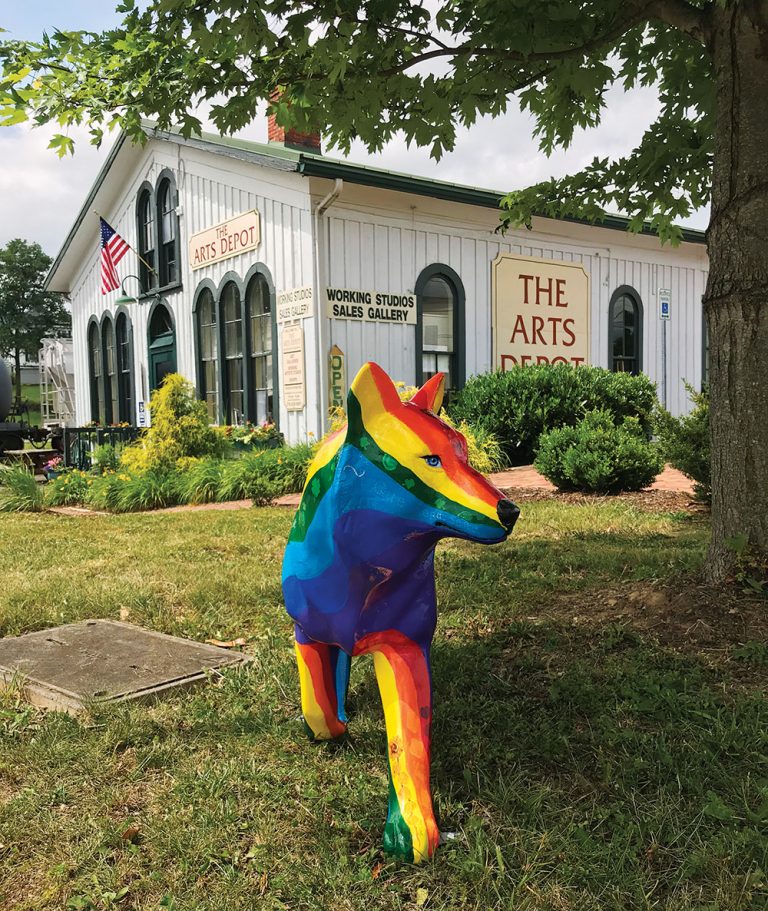 One example is the renowned Barter Theatre in Abingdon, which is the nation’s longest-running professional theater and has featured actors who later became Hollywood and Broadway stars, including Gregory Peck, Patricia Neal and Kevin Spacey, to name a few.

This 500-plus seat theater in Abingdon produces over 25 musicals, plays and live band performances year-round. The theatre’s second stage – Smith Stage – is located across the street, along with Barter Lounge, which offers wine, beer and other concessions. Smith Stage is a smaller, more intimate space that usually brings newer works and edgier plays.

For those who appreciate the visual arts, the Southwest Virginia Cultural Center & Marketplace in Abingdon – a work of art itself – houses a sizable collection of eclectic art from its talented artisans. Their work consists of clay, fiber, glass, jewelry, manmade material, metal, mixed media, natural material, two-dimensional creations and wood.

Also a favorite among the locals is the Abingdon Arts Depot, which is housed in the community’s historic freight station. It boasts three galleries and seven resident artists who allow people to interact with them in their studios. Visitors can find works of folk art, clay, textiles and more.

Beautiful pieces can also be found outdoors throughout the county, including the often-photographed Abingdon LOVEwork sculpture made up of the word LOVE in large white letters, with a howling wolf inside the letter O. The piece stands across from Barter Theatre, and a nearby fountain houses another sculpture by artist Charles Vess called Midsummer Play.

9 Ways to Explore the Outdoors in Washington County, VA

Get ready to hike, bike, kayak and canoe your way through this beautiful haven ideal for recreation and relaxation.

A groundbreaking took place in August 2021 for a $2 million improvement project at the museum, which is located on the west end of Main Street in Abingdon.

“We showcase exciting exhibits, including a show called Bernini and the Roman Baroque that ran here from October 2021 to January 2022,” says Betsy K. White, director of the William King Museum of Art. “Bernini was a 17th century artist and sculptor in Rome and the father of the Baroque style, who painted and sculpted with exuberance and irregular lines. That was a well-attended exhibit.”

White says 2022 promises to be another good year for the museum, including a major exhibition called The Long Rifle in Virginia that will run from April through October, as well as a show titled The Open Road: The Art of the Motorcycle, which will take place mid-June through mid-September 2022.

“The arts can be a powerful tool for economic development and quality of life, showcasing the character of a region and often attracting tourists and prospective businesses.”

In Glade Spring, an organization called Town Square Center for the Arts serves as an artisan incubator where entrepreneurs can mold their artistic talents into business ventures. The center also provides opportunities for the public to engage with the resident artists as they create, display and sell their work.

“Recently, a large pottery enterprise incubated into a new business, and now, we are looking for more new tenants to fill up the center,” says Dirk Moore, a board of directors member for Project Glade, a nonprofit that owns Town Square Center for the Arts. “We want to serve artists in Glade Spring, Meadowview, Saltville and those surrounding areas.”

The Show Must Go On!

And it did at Barter Theatre, even during the height of COVID-19. In order to observe all safety protocols, theater officials decided to stage their plays outdoors at Moonlite Theatre drive-in located on Lee Highway in Abingdon.

“I had heard that places in Europe started having outdoor concerts at drive-ins during the pandemic, so I looked into accessing the Moonlite,” says Katy Brown, Barter Theatre producing artistic director. “The Moonlite property had fallen into disrepair, but we got great help from sponsors like Food City, Meade Tractor and JA Street & Associates to fix everything.”

“Audiences loved the experience, at a time when many people were basically shuttered in their homes. People in their cars flashed their lights, honked their horns, and used airhorns and cowbells to applaud and show their appreciation. It was an exciting, interesting and daunting experience all at the same time.”

Brown says a stage was built in front of the big screen, and actors performed while a video crew projected the action onto the big screen. Drivers in the parked cars were instructed to tune their radios to a certain station to hear the plays, and an app was available for attendees to order concessions.

Live performances began in July 2020. Some of the productions staged included “The Wizard of Oz,” “Beauty and the Beast,” “Dracula,” “The Tempest” and “A Christmas Carol.”

Seeking a Small-Town Vibe? Consider This Hidden Gem in Virginia

Here are six reasons why you should consider moving to Abingdon and Washington County right now.