Skip to content
Home > VA > Arlington > Affordable Places to Live > The Cost Of Living Diaries: Moving From Austin, TX, to the Suburbs of DC

The Cost Of Living Diaries: Moving From Austin, TX, to the Suburbs of DC

The DC area is one of the most expensive places to live in the country. We asked someone who recently relocated there how the move has affected her life — and her bank account. 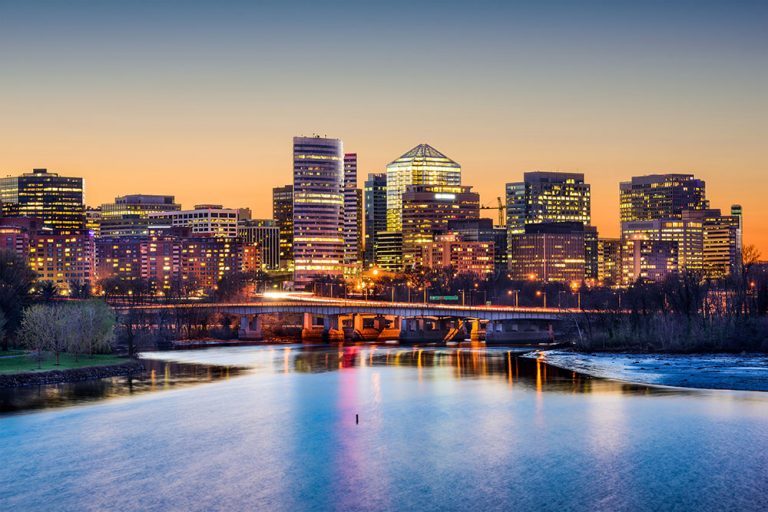 Are you considering moving to Washington, DC? Or – probably more accurately – the suburbs of DC? Before you pack your bags, read this interview from one woman who left Austin, TX for Arlington, VA – one of DC’s best suburbs.

Job in DC: Billing Coordinator for a large law firm in DC

Rent/mortgage in the suburbs of DC: $1,595 split proportional with partner to our salaries. I make a lot more here in DC so I pay $700 to his $895. Our condo is tiny so he pays another $200 a month for a storage unit to hold everything our garage used to hold – motorcycle, garage brewery, etc.

This was a voluntary transfer for my partner within his same position; we’re hoping it leads to new opportunities for us both. I had some issues finding a well-paying job in Austin because I’m not in tech. The job market is pretty saturated with people moving there from out of state.

When we moved to Austin, we hadn’t been together very long so we split everything evenly. Even without having a job upon moving and having little savings, I was able to pay my way in Austin.

When we moved to DC, we discussed splitting things proportional to our salaries to make the transition a little easier for me since we were moving for his job. Also, he had already lived in DC in the last 10 years so he was pretty aware of the cost of living.

I think, overall, we had a pretty good understanding of what we were getting into. I was very worried I wouldn’t be able to find a decent job that would cover the higher cost of living as well as my student loans. Luckily, I found a decently paying job within four months that allows for the cost of living. In fact, I’m making almost twice what I did in Texas!

What was it like looking for housing in the suburbs of  DC?

In Texas, we had a two-bedroom duplex that was about 850 square feet with a small garage, driveway and fenced backyard. We moved to DC with the idea that we would rent for a year and then buy a house.

My partner’s brother lives outside of DC and graciously went to look at places we found on Craigslist. I had a bad experience working with agents in Austin and didn’t want to repeat that process. The housing market moves fast here and we often found that places would be off the market within a day of them being advertised.

There also wasn’t a lot in our price range (with me being unemployed and my partner shouldering the entire cost for the length of time it took me to find a job) but we managed to find a one bedroom condo in Arlington, Virginia which I lovingly call “the shoebox.”

I really wanted the experience of living closer to DC, so it’s worth the sacrifice of space and inflated rents. The condo is about 650 square feet with a galley kitchen and minimal storage. We were not surprised about any of this and we figured we’d be buying a house in the next year so we could manage the downgrade.

It turns out that there is no way we could ever afford to buy a house in the immediate area where we live. For us to find a house below 400K, we would have to move much further away from the city. I already travel 45 minutes to go six miles to work and am not willing to do more.

We really don’t like living so close to other people and want a single family home so now we have to make the decision to compromise with a townhouse or just move to another city all together.

There are a lot of costs that changed since moving. Produce is definitely more expensive here and going out to eat is exponentially more expensive. We eat out way less than before and I will never again take 99 cent avocados for granted.

I also had thought flights would be cheaper out of DC, but so far that hasn’t rung true. We take trips to Europe every year and we paid a little bit more this year. I think the advantage of DC airports is that they have WOW airlines but I tend to stick to American Airlines. I do think domestic flights are a bit cheaper, though.

We would eventually like to start a family but I just don’t see how we could do that here. DC is one of the most expensive places for childcare in the nation. That and the long commutes to affordable housing make it difficult for young couples that don’t make a lot of money.

What do you love about your new city?

I love the history (museums, Civil War battlefields, and architecture) of Virginia and the monuments in DC. It’s fun to play tourist where you live and DC has unlimited opportunities. It’s impossible to be bored here.

It’s also great being close to the Shenandoah mountains for day trips to hike with the dog. The area that we live in is super dog-friendly with dog parks and creeks for our dog to play in.

I also love that we can drive different places like Philadelphia or Pittsburgh for a weekend. In Austin, we had to fly somewhere to get away.

What do you miss about Austin?

I miss the food, mostly. I’ve lived/been to enough places in the US to know that Austin has the best food. I’m sure there’s good food in DC but I haven’t found it yet. I’m open to suggestions!

We’re also really into beer culture and the craft brewery scene and DC doesn’t have a lot to offer in that department. There are some good breweries farther out in Virginia, but I miss having four breweries within two square miles of my house like in Austin.

I also just miss the quintessential weirdness of Austin and its people. It has a more laid back attitude than DC. Everyone in DC is constantly rushing around and seem so angry!

That I’m ready to go already! I don’t regret moving. We love the adventure of living in new places but honestly, I just don’t feel like this is our place. My partner just got a new position that will probably result in another move in six months or so. I’m excited to see where we end up next year!

Why Arlington, Va. Is a Top 100 Best Place to Live

What advice would you give to someone who’s interested in moving to a more expensive city?

Do online research but also try and talk to someone who lives there. I like reading lifestyle blogs that give you snippets of life in a certain place. I think in the future, we’ll look for a place with a lower cost of living and a slower pace of life.