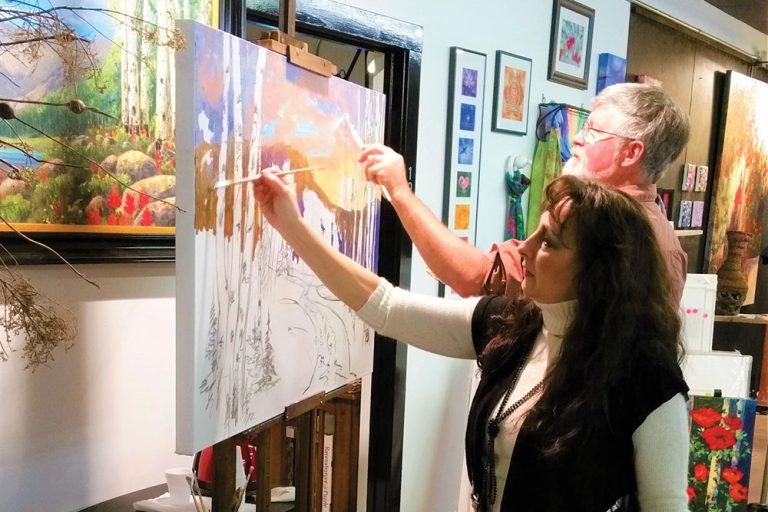 West Central Wisconsin offers it all: wide-open spaces, spectacular natural features, arts and culture amenities that can rival much larger areas and communities with revitalized and walkable downtowns.

Outdoor enthusiasts can access impressive hiking, biking, cross-country skiing and ATV trails, while water lovers can make a splash on the numerous streams, rivers and lakes that are ideal for canoeing, kayaking, fishing and boating.

The 250-mile Great River Road, the only national scenic byway in Wisconsin, winds along the Mississippi River through 33 historic towns, several in West Central Wisconsin, including Bay City, Hager City, Stockholm and Pepin. All along the Great River Road, visitors can experience unique dining establishments as well as sample wine or a malt beverage while overlooking beautiful terrain at one of the many vineyards and craft breweries.

Summers in West Central Wisconsin are filled with music festivals across a full spectrum of genres. From one of the largest country music festivals in the nation to weekly festivals along the waterfronts, the region has quickly become a hub of live music.

One of the region’s leading features is its overall affordability, with housing costs averaging about 12% below the national average. The region offers a range of housing options, from downtown living to traditional suburban to rural opportunities offering plenty of elbow room.

In Eau Claire, the historic Cannery District is undergoing a transformation that includes new housing options and public spaces. One new project in the works is a three-story urban housing development that will be built in two phases and add around 150 market-rate and affordable housing units.

Fun for All Four Seasons in Greater Eau Claire

Another appeal West Central Wisconsin offers is ease of getting around. Nearly 71% of the region’s residents have a 30-minute or less commute, well above the national average. Commercial air service is provided by Chippewa Valley Regional Airport, and Minneapolis-St. Paul International is in close proximity.

Downtown Menomonie features The Mabel Tainter, which opened in 1890 and now hosts dozens of live performances and a full plate of annual events each year, including Historic Beer Walk and Great Community Cookout, which draw up to 1,000 people. “The district is becoming more of a destination all the time,â€ Dubuque says.

The region’s heritage and well-developed appreciation of craft brewing and distilling has created a number of successful enterprises, such as Jacob Leinenkugel Brewing Company in Chippewa Falls and 45th Parallel Distillery in New Richmond, which opened in 2007.

The distillery buys its grain from Rusmar Farms in St. Croix County, which supplies it with the corn, wheat and rye used to produce its spirit products, which include vodka, gin, bourbon, rye, wheat whiskey, liqueurs and aquavits.

The distillery is undergoing a fourth expansion and is a growing destination for tours and tastings, especially on the weekends.

“Half of what we make goes out in bulk to other whiskey brand companies to use, and we’re producing seven days a week with two shifts,â€ says Paul Werni, founder and owner of 45th Parallel Distillery. “We were busy even through the roughest coronavirus months.”

West Central Wisconsin has a strong appeal for artisans and creatives.

In Eau Claire, Artisan Forge Studios (AFS) leases space to 40+ artists and craftspeople who produce their works while fostering artistic collaboration between one another.

Local metal artist Greg Johnson founded the guild in 2015 to elevate and showcase the talents of local artists, building on the AFS cornerstone ideals of creativity.