“The horse was nose-to-nose with her. They just stood there for 20 to 30 minutes looking at each other.” 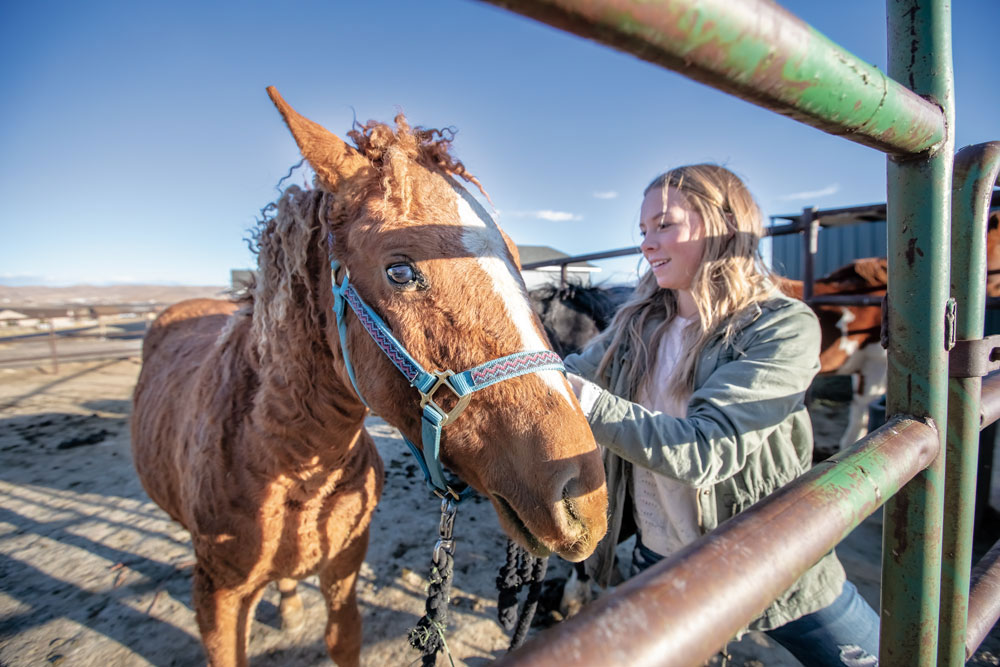 Last July, 14-year-old Briannyn Stauffer was on a wild horse tour in Sweetwater County, Wyoming, when a curly-maned filly broke away from a group of horses to approach the teenage girl. The baby horse walked up to Briannyn, sniffed her and then nuzzled up against her. Everyone in attendance was in awe of the pair’s instant connection.

The sweet bonding between Briannyn and the wild filly was captured on camera by Livability photographer Jeff Adkins, who was along for the ride and taking photos to showcase the wild horse tours.

“The horse was nose-to-nose with her and put its head on her shoulder,” Adkins recalls. “They just stood there for 20 to 30 minutes looking at each other.” It was one of those beautiful, unscripted moments that’s better than anything a photographer could stage.

The following Christmas, Briannyn’s dad David presented her with a special gift to memorialize that moment: a canvas portrait of herself with the wild filly.

6 Iconic Christmas Movie Houses You Can Visit in Real Life

From the “Home Alone” mansion to Susan’s dream home in “Miracle on 34th Street,” here’s where you’ll find the famous houses from your favorite Christmas movies.

Briannyn beamed when she saw the photo. She had eagerly told her friends about her interaction with the wild horse and thought about it often. In the months since, she had been asking her parents for a horse of her own, proving her responsibility by helping take care of the horses of a family friend, who works for the Bureau of Land Management.

As Briannyn admired the canvas portrait, her dad told her that wasn’t her only gift: she was also finally going to get a horse of her own.

And not just any horse, but the wild horse in the photo – the one that had been smitten with Briannyn since their magical meeting was captured on camera.

“When we saw the pictures of her and the horse, we thought ‘She needs this horse,’” says David. “The horse found her.”

Thanks to a program that allows families to adopt wild horses in an effort to protect the animals and to manage population growth, Stauffer was able to make his daughter’s Christmas wish come true.

The Bureau of Land Management, through the Wild Horse and Burro Program, is tasked with protecting wild horses across the United States, covering 26.9 million acres of public land in 10 states. As part of that mission, the agency holds adoptions throughout the year, which helps manage population growth. The filly Briannyn had bonded with was among those that were up for adoption.

In 1971, Congress passed the Wild-Free Roaming Act, which declares the horses to be “living symbols of the historic and pioneer spirit of the Westâ€ and requires the BLM along with the U.S. Forest Service to protect them. Since then, the BLM has placed more than 240,000 wild horses and burros into private care.

For families like the Stauffers, adopting a wild horse is a chance to care for a part of America’s heritage. And what better place to do that than Sweetwater County? Located in gorgeous southwestern Wyoming, the county embodies the spirit of the Wild West, serving as a perfect basecamp for adventure and exploration. It’s where John Wesley Powell started his expedition that delivered him to Grand Canyon, where wild horses gallop across the plains and where ATV riders can roar over sand dunes.

For Briannyn, who enjoys horseback riding, the wide-open swaths of land are her favorite part of where she lives.

“You can ride for miles without seeing any houses,â€ she says.

For now, she’s spending lots of quality time with her own filly, who is just shy 1 1/2 years old, introducing her to other horses and taking her for walks. Eventually, when the filly is old enough, she’ll take her out riding.

“She’s one of the sweetest horses I’ve ever met,â€ Briannyn says. “Curly horses are so friendly. They are kind of like big dogs, they’ll follow you around wherever.”

Oh, and the name she picked out for her horse?

Annie. It’s a nod to the horse’s curly red hair.