Find out where to ride motorcycles, four-wheelers and dune buggies. 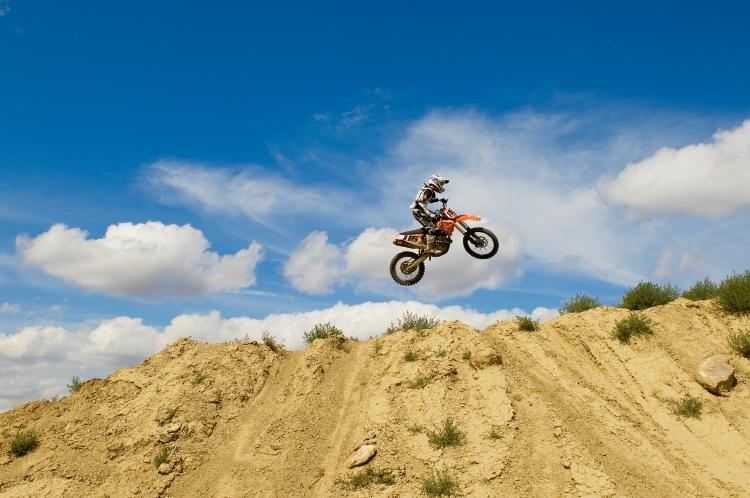 Here’s the dirt on motorsports in Gillette – they are alive and well, and exciting.

One rollicking example is the high-banked, 3/8-mile, dirt track oval of the Gillette Thunder Speedway, a popular racing venue whose attendance has grown steadily over the years. Motorsports action at the speedway takes place every Saturday night from mid-April to mid-September.

The Gillette Thunder was established in 1977, but moved to its current location on the eastern portion of the CAM-PLEX property in 2004. CAM-PLEX donated the land to the track, and the speedway holds its weekly races as a nonprofit organization.

The divisions that compete each Saturday night are late models, limiteds, B-modifieds, A-modifieds and thunder stocks. Other events include two sprint car races that are scheduled twice a year, a monster truck competition and the nationally known World of Outlaws series that makes an appearance at Gillette Thunder every July.

“On any given Saturday night, we have 85-115 cars out here competing, with 1,500-1,800 people in the pit road areas and another 600-1,000 people in the grandstands,” says Ed Kirchoff, promoter of the Gillette Thunder Speedway. “No kidding, this is one of the best manicured dirt tracks in Wyoming – it is real friendly to the tires and the car chassis. Plus it’s a wide track with plenty of passing room, and some of the late models and sprint cars can top out at 100 mph in the straightaways.”

Also part of the dirt-related excitement in Gillette is motocross racing, which involves motorcycles racing outdoors on tough terrain within an enclosed area. Such is the case at Powder Basin Motocross Track, which was established in 1992 and is also located on CAM-PLEX property along a 20-acre site.

The one-mile dirt track features tight, windy curves along with hills for big motorcycle jumps and smaller jumps. Two regional motocross competitions are scheduled each year at Powder Basin, with one staged in early May and the other in late August.

“We are affiliated with the High Plains Motocross Association, which features riders from Wyoming, North Dakota, South Dakota, Montana and Nebraska who earn points each weekend during a season that runs from April through August,” says Randy Stahla, president of Powder Basin Motocross Track. “At our two races in Gillette, we schedule several competitive divisions, with riders starting out as young as 4 years old and going all the way up to the expert class.”

Stahla says 250-400 bikers compete in Gillette at each of the two annual races, with 10-40 motorcycles registered in each division. He adds that motocross racing often seems to be a family sport, with generation after generation getting involved. One example is Stahla himself, who has been in motocross for 30 years and now watches his 16-year-old and 6-year-old sons compete.

“Motocross is a big deal in Gillette – in fact, all racing is a big deal here, whether it’s cars or motorcycles,” he says. “People in Wyoming like the outdoors, and racing is just another activity to experience in the high plains.”

Why Gillette is a Great Place to Live