Gillette is becoming a hotbed for BBQ, thanks in part to competitions like the Smokin' on the Prairie Charity Barbeque Cookoff. 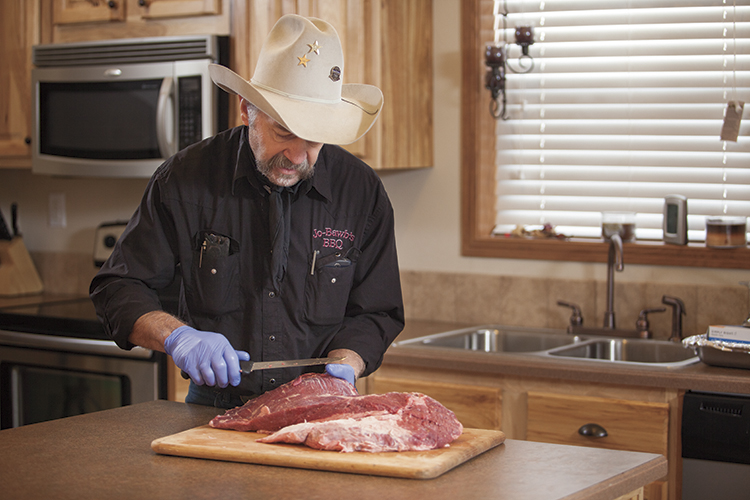 Barbecue is a popular topic in Campbell County these days, thanks in part to Jo-Bawb’s, a Rozet, Wyoming-based husband-and-wife barbecue team that has single-handedly raised the profile of Gillette’s barbecue scene. In 2013, the pair competed in 17 events around the country, earning a trip to the Jack Daniel’s Invitational (the Super Bowl of barbecue competitions), where they finished seventh among 97 teams from around the world, taking third place in brisket.

“This is the first time a Wyoming team has ever qualified. It was the highlight of our lives as BBQ’ers,” says a proud Lon Mitchell, the male half of the duo, before noting that Jo-Bawb’s caters special events when in-between competitions.

For the uninitiated, a competition barbecue team cooks four meats – chicken, pork ribs, pork butt and beef brisket – at all Kansas City Barbeque Society events, KCBS being a national nonprofit organization that promotes “America’s favorite cuisine” and defines the rules and regulations for officially sanctioned competitions, which resemble what you’d see on [Destination America’s] BBQ Pitmasters. Judging is done in the blind, and the team with the highest number of points across the four categories is declared the winner.

Great Places to Eat in Gillette

Smokin’ on the Prairie

One of the competitions that Jo-Bawb’s entered in 2013 was the Smokin’ on the Prairie Charity Barbeque Cookoff, which is held the second weekend of every August at the Knights of Columbus Hall in Gillette and features a $10,000 purse. “We had 25 entrants this past year,” says event organizer Steve Thomas, “and about half of those were serious competitors who hoped to win and get the automatic entry to the Royal,” referring to the American Royal World Series of Barbeque Invitational, the largest barbeque contest in the nation.

“We’ve competed at Smokin’ on the Prairie [twice] and won People’s Choice both years,” adds Mitchell, who utilizes a custom smoker (“it’s nothing fancy, but it’s efficient”) in competition. Yet, he insists that the smoker one uses isn’t necessarily all that important. “It’s what you do during the prepping and cooking of the meats that makes all the difference,” he explains.

Both Mitchell and Thomas believe that the local barbecue scene is only going to get bigger and more competitive as time goes on, noting that 11 teams from Gillette competed at Smokin’ on the Prairie in 2013, and 14 the year before. “I’ve been inspired to take BBQ to a higher level because of Gillette and because of the competitions,” Mitchell says.

Of course, one needn’t be part of a contest to enjoy barbeque in Gillette. A hungry diner can visit Pokey’s BBQ and Smokehouse, for instance, a friendly, family-based business that serves up helpings of restaurant-style barbecue, and also offers steaks, seafood and an all-you-can-eat salad bar.

“Barbeque is growing by leaps and bounds. It’s amazing how many people get into it [here]. People you wouldn’t even think about have smokers and smoke meat,” Thomas says. “There is definitely a love affair with barbecue in Gillette,” Mitchell says. “But, you know, there is also a love affair all over the nation for good barbecue.”