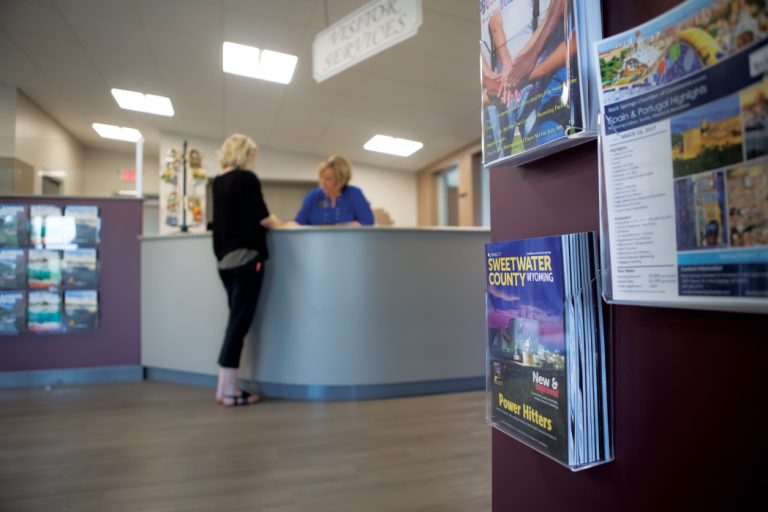 No more little yellow shed. That was the nickname the Rock Springs Chamber of Commerce gave the tiny office building it had inhabited since 1981, but that nickname is now retired.

From September 2015 to April 2016, a $1.1 million expansion and upgrade of the original building resulted in doubling the square footage of the structure; the project also enhanced the small Chamber Park that adjoins the property. Today, the Rock Springs Chamber Visitor Complex is a beautiful, functional facility on Dewar Drive, just off Interstate 80 at exit 102.

“We are at one of the busiest interchanges in western Wyoming, and the little yellow shed was one of the first things that motorists saw when they exited the interstate,” says Dave Hanks, Rock Springs Chamber of Commerce CEO. “The tiny building was never designed to be a visitor center. It was designed to be a chamber office, but almost 27,000 visitors enter through our doors each year.”

“Meanwhile, the city donated $250,000 and the chamber put in $50,000, and we received about $200,000 from company sponsors in the community to equip the building with furniture, technology and so forth,” he says. “It is a great facility.”

The upgrade/expansion included adding a conference room, adding office space for staffers, installing a Wi-Fi café for visitors, and installing two individual customer service counters. One of the counters specifically serves traveling visitors, and the other is for selling tickets to residents (and visitors) for local events.

“Tickets for more than 100 events each year are sold at our building,” says Kim George, Rock Springs Chamber of Commerce director of finance. “Our highest volume time for ticket sales is always in July, and that’s also when we receive the highest amount of tourism visitors, so it was important to have two separate counters rather than only one like in the ‘old’ building.”

“This system provides better customer service, and our efficiencies have gone way up,” she says.

Hanks adds that also on site is an economic development office where business meetings can take place.

“We can now address membership services, visitor services, economic development and ticket sales all under one roof,” he says. “Also, the front entrance features a 24-hour access area that is open all the time with tourism brochures and information for travelers.”

As for the building’s exterior, gone are any reminders of the little yellow shed. Today, the building is brick with flagstone details, and motorists traveling along I-80 can see a new marquee.

“Since 1981, we’ve had no public restrooms, but now our adjoining park has restrooms, two pavilions and a dog exercise area,” Hanks says. “We also expanded our parking lot so tour buses and large motor homes can easily turn around to get back on the interstate after visiting us.”

The final amenity for the upgraded building is the display of flags out front, which represent 56 different countries.

“Rock Springs is known as the Home of 56 Nationalities, referring to immigrants from throughout the world who came here over the years to work in the coal mines,” Hanks says. “The 56 flags fly on 15-foot-high poles that line Dewar Drive, and the U.S. flag flies behind them on a 125-foot-high pole.”

Hanks adds that many visitors have already complimented the looks and function of the upgraded building.

“A man from Pennsylvania stopped on a Sunday – the only day we aren’t open – and slipped a note under our office door thanking us for access to our attractive building as well as the outdoor drinking fountains, public restrooms and pavilions,” he says. “The man claimed it was the nicest visitor center he found on his entire trip across the U.S.”