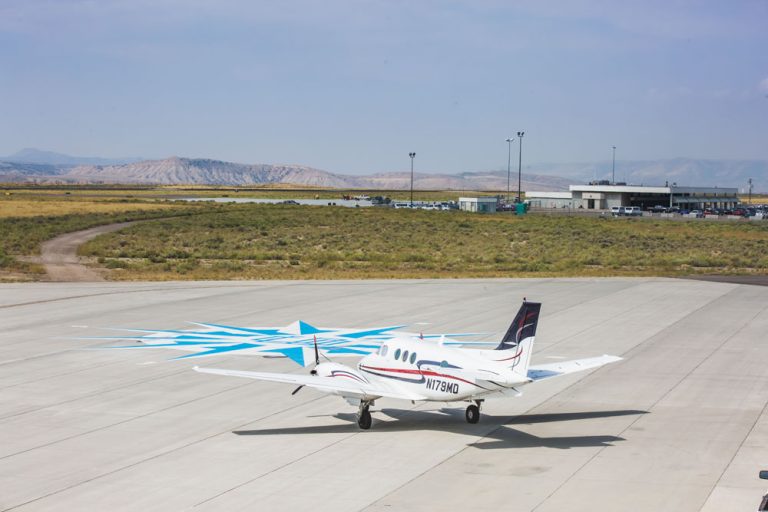 In September, Rock Springs-Sweetwater County Airport announced it had achieved a perfect score on its annual certification and safety inspection from the Federal Aviation Administration (FAA) for the second straight year.

However, that unusual recognition is just the icing on the cake.

In March, the airport announced it would be getting funding to build a 30-kilowatt solar array in conjunction with the completion of its new General Aviation Terminal and Hangar Facility scheduled to open in April 2018.

Find Out How Sweetwater County, WY Became a Land of Opportunity

The airport will be receiving more than $94,000 in funding through Rocky Mountain Power’s Blue Sky program. Customers of the utility can opt into the program by purchasing renewable energy for just $1.95 more per 100 kilowatt-hour. Rocky Mountain Power then uses the additional funds to support small-scale renewable projects in the communities it serves.

With the total cost of the array estimated at around $110,000, the funding from Rocky Mountain Power will cover about 85 percent of the cost. A complete return on the airport’s 15 percent, achieved through power savings provided by the solar farm, is projected to happen in less than 10 years.

Scheduled for completion by the end of October, the solar project is just the latest in a series of improvements at the airport designed to reduce the environmental footprint of the facility and its operations. Other clean technology projects include HVAC and boiler systems replacement, LED lighting upgrades, and the use of automated systems. Future projects include several LED retrofit projects as well as additional solar arrays to support other facilities on airport property.

Airport manager Devon Brubaker says the shift to clean technology and renewable energy sources is driven in large part by financial reasons. He adds that the airport is also dedicated to being a model citizen when it comes to the environmental responsibility.

“When we look at these improvements, they have a very quick return on investment that allows us to be cash-flow positive in a short amount of time,” Brubaker says. “So that makes the business case, and then obviously there is just being responsible to our environment and finding ways to be a leader.

“In the state of Wyoming, we have always been dependent upon the minerals extraction industry and we will be for some time, but we also want to start preparing ourselves for what the future might hold. Renewable energy is most likely what the future holds for us and we want to be a leader in that movement.”

When the new terminal and hangar facility opens, it will allow the airport to tout its clean technology to prominent industry leaders, as the new facility will be better equipped to handle the large, modern jets that typically land at the facility.

“Historically, when these large corporations come in with their multi-million-dollar jets, we could not adequately service them because we didn’t have the facilities to do so, especially during the winter,” Brubaker says. “But we will have these facilities now, so it eliminates a barrier to their expansion or growth to Sweetwater County.”

The Sweetwater airport services more than just jets owned by captains of industry. It also accommodates small “mom and pop” planes, as well as commuter service from United Airlines to nearby Denver. Brubaker says all of the airport’s new facilities offer an opportunity for it to be a true gateway for visitors to Sweetwater County.

“We haven’t been the greatest of gateways, due to our facilities,” Brubaker says. “This new facility allows us to really put a positive step forward for first impressions of our community and allows us to take care of all of the customers’ needs and really helps us eliminate some barriers to economic development in terms of aircraft servicing and customer service.”

Clearly, the airport is also looking to act as a gateway to a cleaner, more sustainable future.