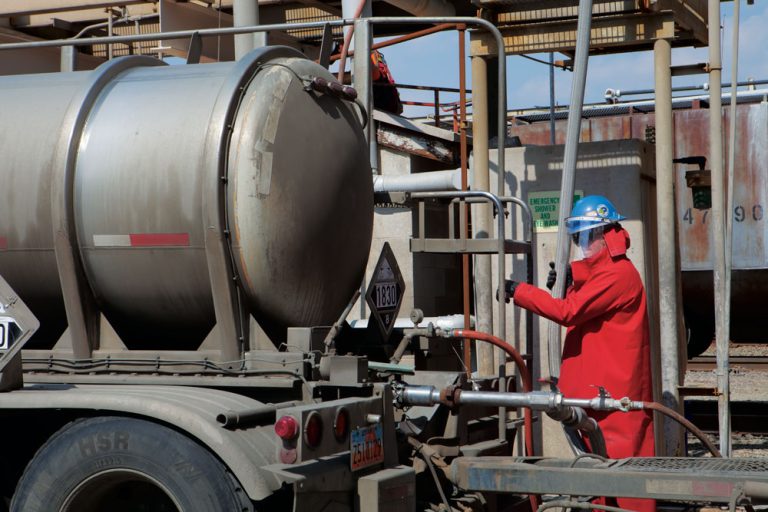 The J.R. Simplot plant in Rock Springs, which makes phosphate fertilizer used to grow crops, has experienced its own massive growth over the years.

Since production began in earnest in Sweetwater County in 1992, major expansions took place in 1996, 1999 and 2014, and in 2016 the company opened a new $350 million ammonia plant adjacent to the its existing fertilizer complex.

In all, more than $1 billion in capital expenditures has been invested by the company during its years in Rock Springs. Besides the Sweetwater County campus, Simplot also operates agribusiness facilities in Utah, California, Idaho, Nevada and Canada. The company’s motto today is “Bringing Earth’s Resources to Life.”

The Simplot fertilizer production process actually begins 12 miles north of Vernal, Utah, where phosphate ore is mined, crushed, mixed with water to form a slurry and then shipped 96 miles through a pressurized pipeline to the Rock Springs facility. Molten sulfur and ammonia are added along with processes to produce fertilizer used in farming.

Lofto says the company enjoys doing business in Sweetwater County, especially since it provides a strong and dedicated workforce with experience in the type of work that Simplot specializes in.

“Sweetwater County gives us close proximity to our phosphate mine, and this is a supportive community,” he says.

How Sweetwater County, WY Built Innovation at its Local Airport

Premier Plant in the U.S.

The ammonia plant opened in 2017 and helps Simplot retain its status as one of the largest privately held food and agribusiness companies in the nation. The new, expansive facility allows Simplot to have its own supply of ammonia instead of purchasing it elsewhere and having it delivered to the Rock Springs site.

“With the addition of the ammonia plant, our Rock Springs facility is now the premier fertilizer manufacturing facility in the United States,” Lofto says. “The ammonia plant meets all regulatory requirements of the Wyoming Department of Environmental Quality and was designed, constructed and operated to meet OSHA process safety management standards.”

The plant, which is expected to produce 600 tons of ammonia per day, increases the total workforce in Rock Springs. The phosphate fertilizer and other crop inputs produced by Simplot are sold through wholesale and retail outlets throughout North America.

“Our goal is for our distribution channels to support farmers every step of the way,” Lofto says. “From seeds, technology and specialty products to crop nutrition and protection, we provide the comprehensive services and technologies to ensure farmers get maximum return from their land and their investments.”

“We are a facility that manufactures phosphates, which makes us different than other major area companies that deal with trona, coal, natural gas, uranium and other minerals,” he says. “Our plant is crucial for the economy of our community as well as the county and the state of Wyoming.”

Pizzato adds that Simplot sponsors a number of events throughout Sweetwater County as a way to be a good neighbor and give back to the community.

“The company is a major sponsor of the annual Wyoming’s Big Show fair, and we also back the National High School Finals Rodeo along with several events affiliated with the University of Wyoming,” he says. “Several of our employees are also involved with serving on committees that help make our community a better place to live.”