Murals creatively connect people to the community and environment. 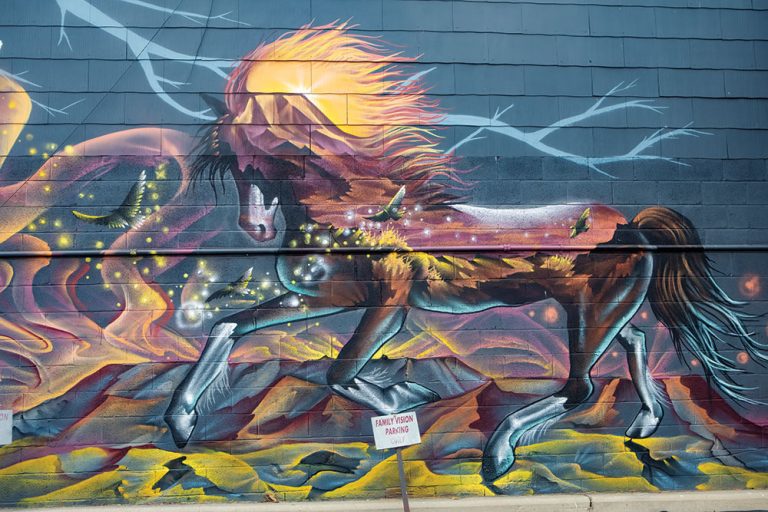 Sweetwater County is a juxtaposition of things: its mining, oil and gas extraction, quarrying, agriculture and manufacturing industries and wealth of hunting and fishing opportunities – all against a backdrop that’s straight out of a classic Western film.

It’s noted for its natural beauty – stunning sunsets, the wild horses of Pilot Butte; and its rocky terrain. The area is both desolate and gritty yet breathtakingly beautiful and winsome. It has many well-known landmarks: Table Rock is a noteworthy butte but also the name of a ghost town that was constructed as oil and gas worker housing in the 1970s.

At Pilot Butte, there is a scenic loop that offers views of a herd of roughly 1,500 wild horses. Boar’s Tusk, a rocky outcropping, is all that’s left of a long extinct volcano. Flaming Gorge is the state’s largest reservoir, sitting on the Green River; it features both a scenic byway and backs up on a 207,000-acre recreation area.

In Rock Springs, the community is inspired by the beauty around it to support public arts projects. The town has initiated visual arts projects such as murals and art wrapped electrical boxes.

“Sweetwater County is known for its wide-open spaces, desert, iconic geographical features, hunting and fishing, and industry,â€ says Susie von Ahrens, secretary of the Rock Springs Box Art Committee. “The Rock Springs Box Art Committee would like to bring some of these landscapes into the beautification of our city. The utility boxes can serve as a canvas for highlighting the area while, at the same time, supporting our local artists.”

There are now two wrapped electrical boxes in Rock Springs. The most recent portrays the herd of wild horses. The first was created by Rose Klein, who was an art student at Western Wyoming Community College when she was approached to do the project.

“We wanted people in the community to feel connected and inspired to get involved,â€ she says. “We incorporated popular industries like coal and our railroad. Because the utility boxes are part of everyday life, it can inspire people to get involved and anyone feels like they can create a box.”

The box art was made possible with a grant through the Sweetwater County Board of Cooperative Educational Service.

Displays of public visual art in Rock Springs have also increased with the Downtown Mural Project, launched in 2014. The group commissions large scale murals on public buildings each summer. The first, on a long vacant city-owned building, features the buttes, desert and sprawling vistas that are so familiar in the area.

Their next project, the Art Underground Gallery, transformed a dark pedestrian underpass into a gallery with 25 original works of art from local artists. “Pronghorn,â€ created by Dan Toro, depicts an animal typically seen in the region. On the back of a building along Fifth Street, Graffiti artist Ryan “ARCYâ€ Christenson created a piece called “Ambition Within.”

“Murals in general add a sense of belonging. They turn ordinary sites into landmarks and can be interpreted differently by everyone, which make them an essential addition to any community,â€ ARCY says. “Ambition Withinâ€ connects deeply with Rock Springs and the embodied culture that touches so many of its residents.”

Another artist, Jesse Stark, created the mural “Rock Springs,â€ which looks like a vintage postcard. Each of the letters spelling out the name of the town shows something iconic to the area: the buildings of downtown Rock Springs; a hat, boots and a lasso; a wild horse; the railroad; buttes; and the reservoir.

“My project is to do things for others. To paint something that people who are from the town would be proud of and something that tourists coming through town will remember,â€ Stark says. “My vision was to combine elements of the area’s history with a kind of graffiti-style lettering for a modern twist.”

Stark places great importance on getting people from the community, especially local school kids, involved in the mural-making process. The Downtown Mural Project’s first fundraiser aimed to hit $7,500 and, instead, raised nearly $20,000.

“I want people to be involved, to get inspired, and to be proud of where they’re from,â€ Stark says.