Skip to content
Home > AK > Where to Live Now > Moving to Alaska? Here’s Everything You Need to Know 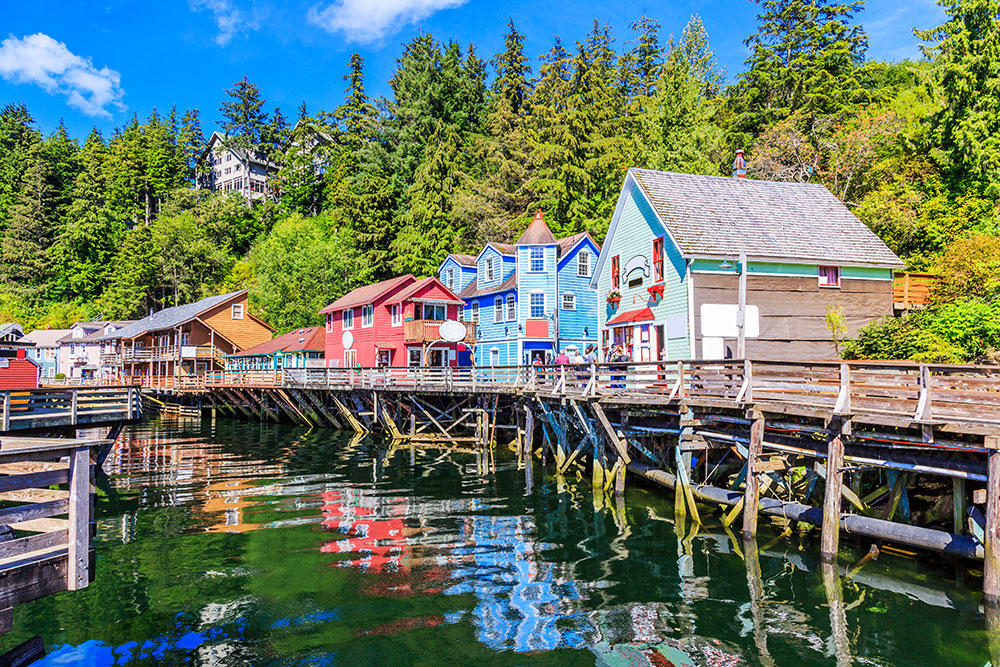 Noted for its stunning natural beauty, abundance of wildlife and extreme temperatures, Alaska often lands a spot on folks’ bucket lists. If you’re looking for a truly adventurous and slightly wild and untamed place to call home, Alaska is definitely your place. Before you make the big move to the Last Frontier, we compiled all the information you need to know about life in Alaska.

Yes, It’s Cold – But Not Always

It’s no secret that Alaska is cold in the winters – with temperatures falling as low as -50 degrees! – but because of the state’s humongous size, its climate actually varies greatly. Places along the state’s southern coast such as Anchorage receive milder winters by Alaskan standards. Alaska’s interior is a continental subarctic climate, meaning cities like Fairbanks can get extremely cold in the winters and often up to 90 degrees in the summers. The levels of precipitation also vary greatly, with capital city Juneau receiving 50 inches – low compared to the Southeast’s massive average of 275 inches per year. In Alaska’s most northern town of Barrow, residents won’t see the sun for 67 days in the winter, and in the summer, will enjoy sun all day – and night – long.

Get the Best of Both Worlds

When you think of Alaska, sprawling mountains and untouched wilderness often come to mind. But Alaska is home to several bigger cities that allow for community and convenience all while being within sight of some of the world’s most majestic views. Anchorage is a good place to set down roots with its healthy business climate, military outposts and school system. Juneau is also one of our favorites, and although it rains more than Seattle here, its beauty makes up for it. Glaciers, endless oceans and incredible hiking are all at your fingertips. 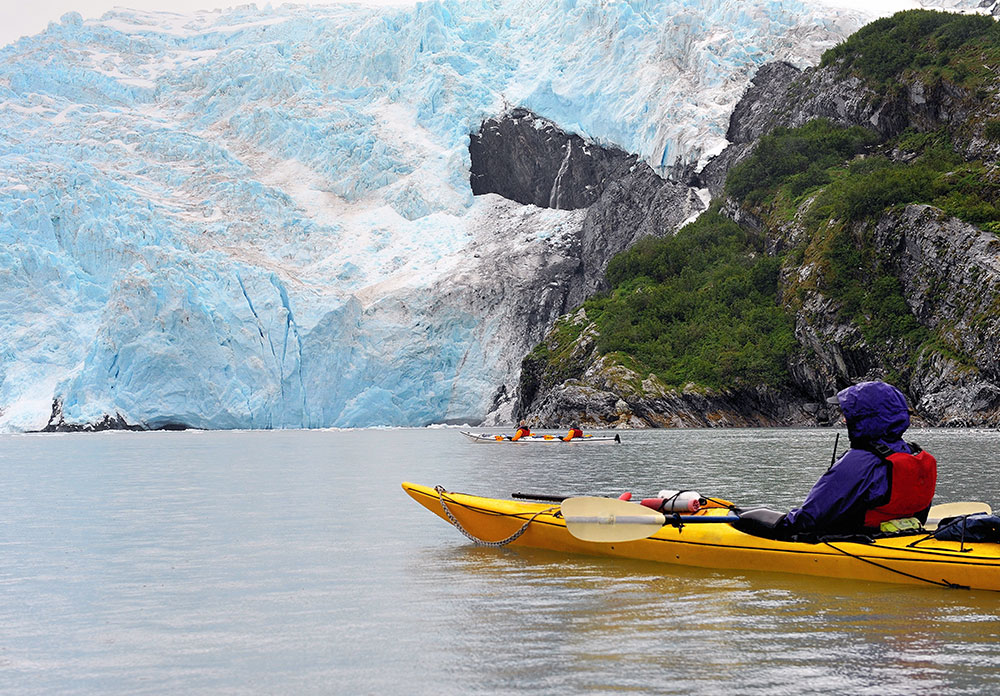 The Economy Is Still Recovering

It makes sense that a state so far away and unlike any other has a completely unique economy. Alaska’s economy is almost entirely comprised of the oil and gas industry, with tourism coming second. Alaska, however, still is in a recession, and because of that, has the lowest score on Forbes’ list for Economic Climate. Employment is also extremely low in Alaska, so if you’re looking to pack up and move here, you probably should have a job lined up first!

Despite a somewhat struggling economy, Alaska does have some great employers. Providence Health & Services is the state’s leading healthcare provider and employs more than 4,000 full-time workers. Grocery stores and superstores like Carr-Safeway, Walmart and Fred Meyer also reign supreme in this great state. In a completely different vein, Alaska Airlines employs more than 1,000 people at the Anchorage International Airport.

All This Beauty Costs a Little Extra

It also makes sense that because it is so far away, prices of goods and services are hiked way up. People often joke that in Alaska, a $5 foot-long from Subway will cost you $7, and it’s true. We won’t sugarcoat it: living in Alaska can be expensive, with cost of living clocking in at 28 percent higher than the national average. For reference, a carton of regular eggs will set you back $5 here. Alaska does famously give an annual check out of more than $2,000 to each resident, so this may help offset the higher-than-average living costs.

Getting Around is Half the Fun

Getting around Alaska from one city to the next isn’t always as easy as hopping in a car, but it’s often a lot more adventurous. Anchorage is the state’s travel hub, whether it’s by air, train or car. Alaska is twice the size of Texas, and many roads don’t lead where you want (or aren’t paved!). In that case, air taxis and the Alaskan Railroad are your friends. Ferries and boats are also a great option, as the state is bordered by two oceans and crisscrossed with 365,000 miles of rivers. Bon voyage!

Denali National Park is six million acres of pristine wilderness showcasing North America’s tallest mountain: Denali. If you’re feeling daring, Denali offers some of the best climbing, skiing and dog mushing around. Local mountaineers stay in Talkeetna, a charming little town at the base of the mountain, and load up on giant pancakes and reindeer sausage before braving the mountain.

Camp on a Glacier for College Credit

Alaska is home to 10 accredited universities as well as lots of vocational schools. The University of Alaska system consists of three university campuses in Juneau, Fairbanks and Anchorage. The University of Alaska Fairbanks has been noted as the nation’s top adventure college by Backpacker Magazine, and with an outdoor program that includes glacier camping and dog mushing, we totally agree. Plus, you can see the Northern Lights from your dorm window! 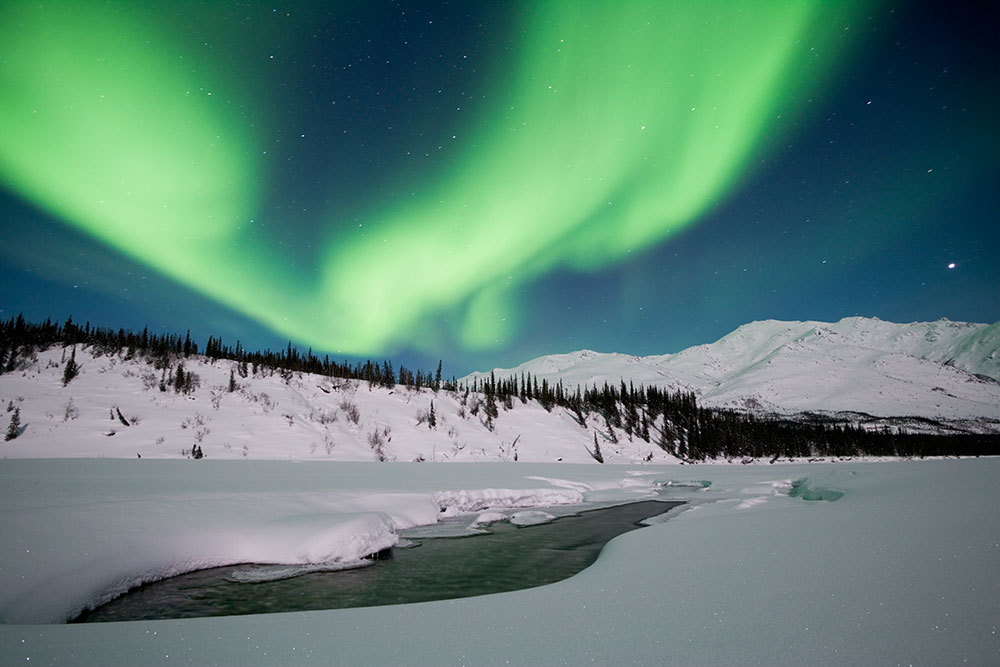 Speaking of the Northern Lights…

The aurora borealis (more commonly known as the Northern Lights) is one of the most magical sights on earth, and Alaska is a wonderful place to check this off your bucket list. The city of Fairbanks is a great place to spot them, but you can see them across the entire state. March and September are two of the best months for aurora hunting, and the ideal times for spotting the lights are between 10 p.m. and 2 a.m. Be sure to bring hot cocoa!