An overview of Auburn Univeristy's Rural Studio and its $20K House Project in Hale County, AL. 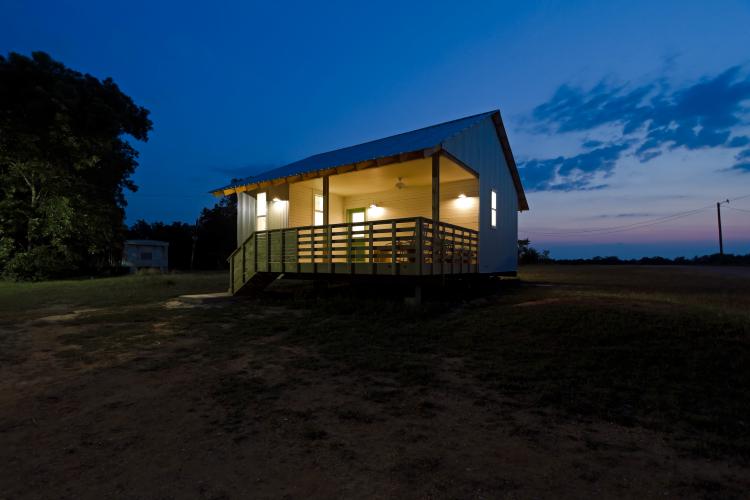 Is it possible to build a beautiful, livable home for just $20,000? Auburn University’s Rural Studio believes so and is trying to change the paradigm in rural communities by replacing trailer homes with small, pretty houses that meet a resident’s needs. For MacArthur, Dave, Joann and other proud owners of these homes, this investment can make an enormous difference. Instead of a trailer home, often seen as a money-losing blight on the rural landscape, they are able to live in low-cost homes that hold and even gain value.

The Rural Studio, founded in 1993 by two professors at the school of architecture, aims to “take third- and fifth-year architecture students away from the ivory tower and into deepest rural Alabama, giving them the opportunity to build houses and design communities,” says Rural Studio Director Andrew Freear.

Working from the premise that everyone deserves good design, students have the opportunity to see their creations come to fruition within a small community – currently including a library in Newbern, Ala., and a Boys & Girls Club in Greensboro. In each case, students learn to work with the community, raise funds, interact with engineers and consultants, and design sustainably.

“There’s no other program like this in the world,” Freear says. “We’re now a resource for local residents; we’ve been around long enough that they trust us.” He adds that the work of students and professors eliminates the cost of billable man-hours for architectural design via traditional businesses; it’s a big advantage – some 127,000 hours of work have gone into the program since 2005.

The Rural Studio’s 20K House Project stands to have its widest-reaching impact: it began as a student assignment aimed at creating affordable rural housing for those who didn’t qualify for commercial credit, says the program’s manager, Marion McElroy (a 2002 School of Architecture graduate). The sum, $20,000, is approximately what someone living on the average Social Security check can manage to make payments on.

Intended to be an alternative to the ubiquitous trailer homes seen across the rural U.S., the project wasn’t originally seen as a potential product line. Each successive year, however, students had the chance to reassess, tweak and build on the design of the previous year, with exceptional results.

“In 2009, we really looked at it, and saw what we did well,” McElroy says. That year, they built Dave’s House, a 500-square-foot, open floor plan home with a 128-square-foot porch. The next year came MacArthur’s House, a modified shotgun style with more segregated space; 2011 brought Joann’s House, a 520-square-foot house with an open floor plan and short walls to separate off the kitchen, plus an “apple-bite” porch.

These three homes, named for their residents, became the inspiration and model for the product line. In 2012, Turner’s House redefined the model by creating a wheelchair accessible home with a storm shelter. Now students are designing a two-bedroom space for families.

McElroy and Freear say the long-term home construction styles of the region, those wooden houses that have stood for a century or more, frequently provided inspiration as to how to construct things right, from covered porches to peaked roofs.

Model Homes and the Future

McElroy says they’re currently building model homes on land donated to Auburn University in Hale County, Ala. Chicago firm Landon Bone Baker took student drawings and created professional construction documents, and with their help, students learn about bringing construction up to code and using FHA and HUD guidelines, as well as the difference between working with very custom design versus creating working plans that easily translate for outside construction crews (the Rural Studio does not operate its own construction company). It’s a field testing opportunity that also allows people to tour and learn about the project.

“Our biggest issue is keeping these houses buildable at $20,000,” McElroy says. “We’re working on deliverable construction documents [via website], and we have a moral obligation to try to keep the quality high and the price consistent as we adjust to the market.”

McElroy says the appraised value of the completed homes is often much higher than the $20K investment, in some cases $40-45,000 – in contrast to a trailer home that instantly loses value.

“It’s an actual home,” she says. “I think that matters in rural communities; it changes the landscape. It’s a chance some people haven’t had before, and unlike a mobile home, it can change the landscape, giving one person at a time a shot at more.”

“I hope these houses can be for everybody,” Freear says. “It does a lot of good in these communities, having a warm, dry, noble, beautiful house that one can afford.”