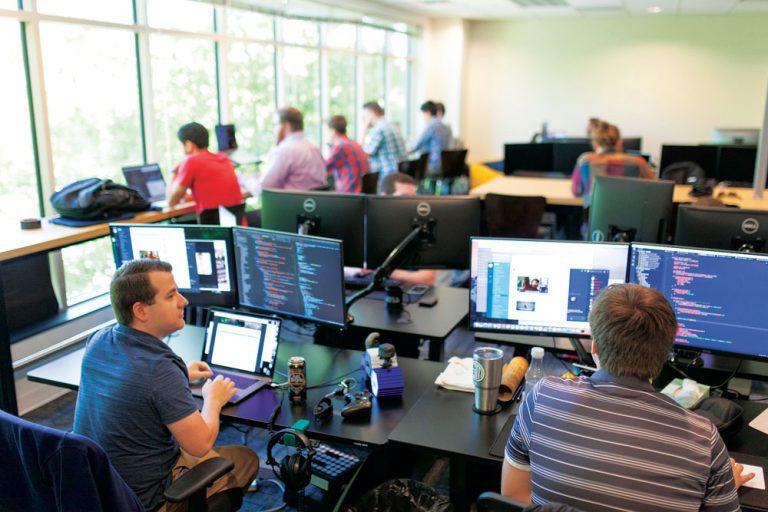 Fayetteville and Northwest Arkansas are the focus of an aggressive effort by three communications companies to provide high-speed broadband service to the region.

AT&T, Cox Communications and OzarksGo are installing fiber networks throughout the area and signing up residential and business customers at a rapid rate.

Now that broadband is available in many rural areas, residential customers can get the most up-to-date service, and businesses can locate in or near these rural areas. Area leaders see this development as an important economic boost for the region.

“We are aggressively growing and enhancing our network,” says Whitney Yoder, public affairs manager for Cox’ Arkansas operations. Cox has spent more than $35 million in capital improvements to bring high-speed internet across the state.

OzarksGo, LLC, a telecommunications subsidiary of Ozarks Electric Cooperative, is installing 7,000 miles of fiber to area homes and businesses.

“We are particularly focused on the rural areas of Northwest Arkansas,” says Randy Klindt, general manager of OzarksGo. Klindt says that the Electric Cooperative’s history here has helped pave the way for its new customer base for internet service.

“Not only is our offering competitive in terms of speed and reliability, our region finally has a truly affordable internet option where people will get what they pay for,” says Klindt, who explains that the company is providing special services for businesses. He says that one advantage of offering the service in rural areas is that it allows many employees to work from home.

According to company officials, the fiber-enhanced speeds will open up new possibilities for technology innovators and businesses, as well as consumers who want faster speeds. AT&T officials say clearing the path for this technology growth brings more investment in its advanced network, which also serves as a catalyst for new employment and economic growth.

“AT&T is committed to expanding access to ultra-fast internet as our customers increasingly interact with their world in more data-intensive ways,” says Cathy Foraker, AT&T external affairs manager for Northwest Arkansas. “A growing number of people stream content directly from their devices and communicate with family and friends through live videos. To keep up with their growing demand, we’re continuing to expand the availability of our fastest internet speeds to more Northwest Arkansas communities.”