Research Breakthroughs are Happening Thanks to Collaboration in Western Arkansas 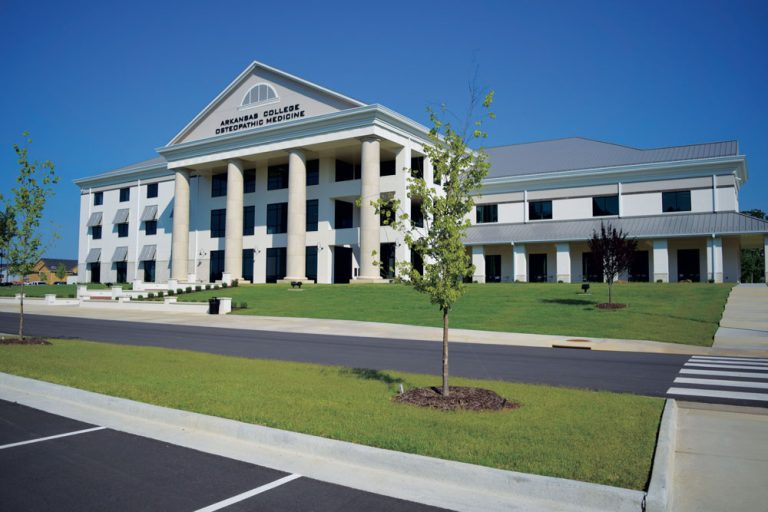 After welcoming its first class in July 2017, the Arkansas College of Osteopathic Medicine (ARCOM) is expected to be the first building block of an innovative medical ecosystem in Western Arkansas.

The new facility is the first brick-and-mortar product of the Arkansas Colleges of Health Education (ACHE), which announced a major partnership last year with the nearby University of Arkansas at Fort Smith (UAFS).

The centerpiece of that agreement is the Research Suite located in the new osteopathic medicine facility. The suite contains more than $1.5 million in research equipment and it has room to grow based upon needs of those who work there.

Ross Longley, assistant dean at the school, says faculty researchers have been able to get back to their research, which had to be put on hold as they waited for the facility to be completed.

“They’re collecting more data as they perform experiments and that data will be used to put together research proposals to be submitted to the National Institutes of Health and other types of granting agencies,” Longley said. “We have a beautiful facility here now, but already we’re looking to the future and the expansion of that facility.”

Ron Darbeau, dean at the College of Science, Technology, Engineering and Math (STEM) at UAFS, says the partnership is holding discussions around initial research endeavors.

“There have been conversations about genetic research and biomedical research,” he says. “Some analytical chemistry will be involved as well.”

Darbeau says the partnership helps further his institution’s goal of addressing the shortage of workers in STEM-related professions in the U.S.

Partnerships like the one with the ACHE will allow UAFS to expose students to a wider array of STEM disciplines.

“We are actually looking at developing some new programs on the campus. Topics like chemoinformatics and bioinformatics have emerged,” he says. “So partnering STEM areas and emerging STEM areas… broadens the exposure for our students and allows them to see how disparate areas can meaningfully overlap. That then allows them to collaborate with peers who are on the other end of the spectrum.

“That way we can get students who are broad-based and who are versatile because that is going to be the key for employability and productivity down the road,” Darbeau says.

How Western Arkansas has Become a Destination for Business

The Research Suite is located in the 102,000 square-foot, state-of-the-art Arkansas College of Osteopathic Medicine, which is the first such facility in the state. Nearly 3,000 people applied for the college’s first class, which enrolled 150 students and hired 75 faculty members.

Graduates from the school will receive a Doctor of Osteopathic Medicine (D.O.) degree, which has all the same rights, privileges, and responsibilities as the more common Doctor of Medicine (M.D.) degree. Doctors of osteopathic medicine differ in that they are trained to take a more holistic approach to wellness, with a whole-body approach to treatment and focus on preventative medicine.

As impressive as it is, the brand new osteopathic college is just the first step. Even before the college opened its doors, the ACHE was announcing new projects intended to expand upon its mission to revolutionize health care in the region.

Chief among these projects is the construction of the $15 million, 60,000-square-foot Arkansas College of Health Sciences building. Projected to open by 2020, the ACHS will offer a number of educational programs, which could include a master of nursing program and physician assistant program

The ACHS building will also be located behind the osteopathic college, and ACHE officials say the emerging campus will be part of a 228-acre neighborhood development. Unlike stand-alone campuses that have come to define the typical American college, the ACHE campus will be designed to be surrounded by a walkable neighborhood with residential and commercial spaces.

Regarding ARCOM’s research efforts, “You have to make the initial investment,” Longley says. “Then, you get the right people and the right collaborations going, and you can reap the benefits – not only on the financial side, but also in helping people and developing new medicines to fight disease.”

How Skilled Talent is Continues to Grow Western Arkansas