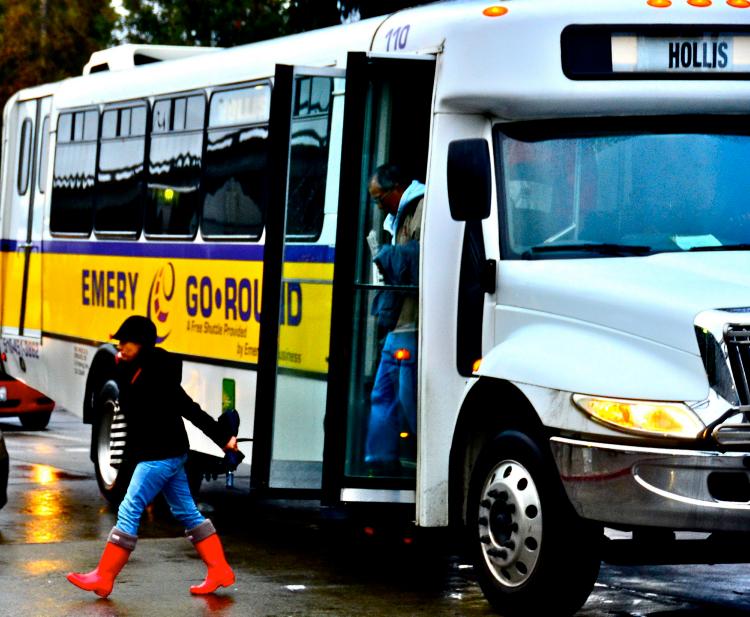 For years, Betsy Cooley commuted to work from her Emeryville, Calif., home to San Francisco and Oakland using the Bay Area Rapid Transit (BART) rail system and a short hop on Emeryville’s innovative shuttle, Emery Go Round. Now she’s retired, but Cooley is still a faithful shuttle rider when she shops or meets friends for lunch. Why ride the purple and yellow bus when she can drive?

“Because it’s incredibly convenient,” says Cooley, who does own a car. “It shows up every 15 minutes or so, it’s free and it runs until 10 at night. And it’s a huge benefit for the city. The shuttle keeps a lot of cars off the road.”

Like many small cities, Emeryville’s population (10,000) balloons during the day when an additional 14,000 people arrive for work at companies like Pixar, Wareham Development and Novartis. The 5,500 riders who use the free Emery Go Round each weekday for their commute, or for just getting around the 1-square-mile city, have helped make the shuttle a model for other communities addressing downtown traffic issues.

Businesses Step Up for Shuttle

The shuttle was launched in 1995 after several Emeryville business owners realized that their small city was attracting more businesses – and their commuting employees. Several companies were already running “last mile” shuttles to and from the BART station in Oakland, and consolidation made sense.

“At first, three or four businesses raised their hands and volunteered to partially fund a shuttle,” says Geoffrey Sears of Wareham, the largest financial contributor to the nonprofit service, which is now completely financed by Emeryville businesses.

“The city chipped in too, seeing this as a way to mitigate traffic congestion without having to invest in a lot of infrastructure improvements. Then, as they saw it working, more businesses wanted to join in and the challenge became how to make it work as it grew.”

The answer was a business improvement district (BID), launched in 2001 with a large majority vote of Emeryville business owners who agreed to tax themselves to support the shuttle. Emery Go Round ridership has grown steadily – by 20 percent in 2013 alone. Still, the independent nonprofit has managed to provide reliable public transit at a cost 50 percent lower than neighboring systems. And, Cooley says, “People here love Emery Go Round.” For the most part.

“There is a really large consensus that the shuttle is a very, very important part of Emeryville’s success,” says Roni Hattrup, director of finance and operations of the Emeryville Transportation Management Association, which operates the shuttle.

“At the same time, a few property owners are saying they don’t think they should be paying for it since their particular business gets little use from it, while residents use it who are not paying. It’s a huge priority of ours to find an equitable solution.”

As the BID nears its 2016 expiration, a task force is studying how to revamp and expand funding and make it more equitable.

“The attention to this issue will result in a stronger, longer-term future for Emery Go Round,” Sears says. “As more and more people use the shuttle, its success has actually become our challenge. But we’ve been able to convince more people to bear the cost as they see how valuable it is.”