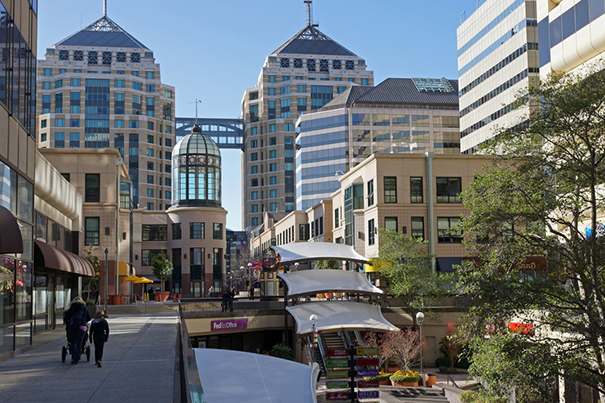 Historically overshadowed by its infamous neighbor across the bay, Oakland is finally receiving some well-deserved recognition from the media. Financially stretched San Francisco residents and others are moving to Oakland seeking refuge from the second dot.com bubble.

Livability named it one of the top 10 best large cities to live in, but we’re not the only ones dishing out the accolades. The New York Times listed Oaktown as the No. 5 worldwide travel destination in “The 45 Places To Go in 2012,” while the California Association of Realtors named Oakland No. 1 of its “Top 10 Turnaround Towns” for leading the nation’s housing recovery. Incorporated in 1852, the heart of the East Bay holds about 420,000 people and sits between 19 miles of coastline and wooded, rolling hills, with 261 sunny days per year with which to appreciate them. One of the most ethnically diverse cities in the U.S., Oakland contains several distinct neighborhoods, including the Latino-centered Fruitvale district, hipster haven Temescal, family- and artist-friendly Rockridge, the peaceful Oakland hills, bustling Uptown, and industrial West Oakland, to name a few. With so many options, a newcomer can easily fit in somewhere. Need more incentives?

Get Out: Oakland has nearly 6,000 acres of parks, most notably Joaquin Miller Park, which offers an extensive trail system that links to an additional 1,830 acres in Redwood Regional Park. The city’s crown jewel, Lake Merritt, offers boating, a wildlife refuge, and improved walking/running paths and park space thanks to a recent $198 million facelift. On Saturday mornings, don’t miss the nearby Grand Lake Farmers Market, where you can pick up organic produce from numerous California growers.

Eat Out: As recently as 10 years ago, one would be hard-pressed to find a good restaurant downtown that was open on a weeknight. Now, the area brims with first-rate cuisine, with new venues arriving seemingly every week. Popular anchors such as Ozumo (upscale sushi) and Pican (gourmet Louisiana) neighbor intimate venues such as Plum, launched by notable chef Daniel Patterson. Uptown’s expanded palate only compliments top-notch options elsewhere, including Cesar, Wood Tavern, Camino and myriad ethnic restaurants. Note: Don’t overlook the food trucks found at various spots throughout Oakland.

See It First: In addition to the excellent Oakland Museum, the city contains numerous art galleries that love to show their wares. Galleries stay open late for the Art Murmur/First Fridays roving party, which has grown to epic proportions. Saturday Stroll offers a laid-back afternoon version, while the Grand Lake neighborhood has its own Third Thursdays.

Make It Happen: Oakland supports small business. Oakland offers several lending and financial assistance programs as well as grants to help small business owners get off the ground. Oakland Grown, a program of the Sustainable Business Alliance, aims to strengthen the local economy by advocating for business owners and encouraging residents to shop local.

Watch It Happen: Oakland has two historic theaters. The Fox Theater, renovated and reopened in 2009 as a live music venue. Just two blocks away is the Paramount Theatre, an Art Deco stunner that is home to the Oakland Symphony and the Oakland Ballet, as well as concerts, live theater and the Friday night Movie Classics series.

Drive to It: It’s relatively easy to get around Oakland by car, but you don’t need one. Oakland has an extensive network of bike lanes, busses and the BART mass transit system. Many neighborhoods are also self-contained, allowing residents to do most of their errands on foot.

That’s Not It: Most importantly, Oakland residents are generally proud of their city and do their part to make it better. Sure, Oakland has crime, but we also have active neighborhood associations and neighborhood watch programs. We have murals on freeway overpasses and trash cans. We hold doors open for strangers. And of course, we got soul.