Find out what stellar projects are in the works as this Colorado city continues to grow. 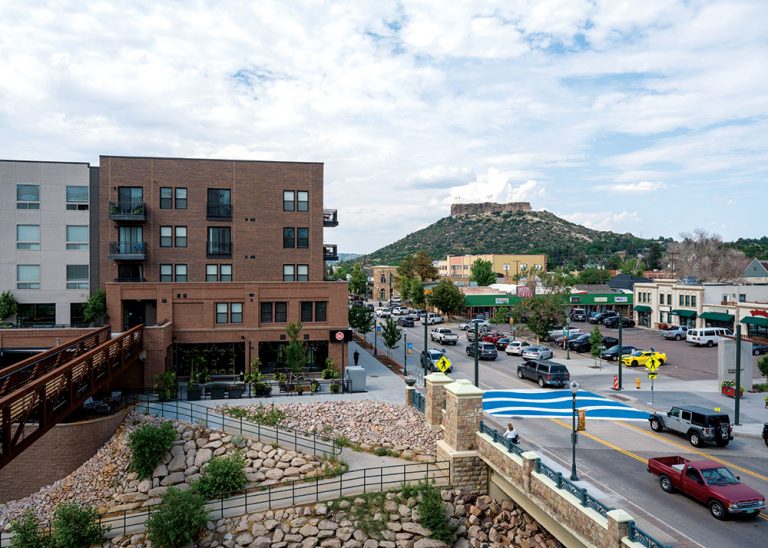 Castle Rock’s population has been on the up and up for years, with approximately 63,000 people moving to this region just south of Denver over the last two decades alone. And this trend isn’t applying the brakes.

Even during the COVID-19 pandemic, people chose to relocate to Castle Rock, CO because of the elbow room it provides residents. To help meet the needs of this growing community, especially in terms of infrastructure, area leaders and developers have launched a number of projects.

9 Reasons You Should Move to Castle Rock, CO

Whether you’re relocating for work, seeking a family-friendly locale or looking for a place to retire, this Colorado city offers many advantages.

Castle Rock’s downtown district is one area of town where you can pinpoint areas of recent development. For example, the Mercantile Commons, a mixed-use facility for retail, restaurant, apartment and office space, opened in 2017. Also providing more office space downtown is The Move, which opened a few years ago.

Another downtown addition is Riverwalk. This residential, commercial and retail center along Wilcox Street consists of two mixed-use buildings.

The $64 million project was developed by Tony DeSimone, an executive with Golden, Colorado-based Confluence Companies. DeSimone says his goal with Riverwalk was to establish an eye-pleasing, walkable district that would be dynamic seven days a week where people can live, work and dine all in the same place.

Encore Has Arrived; The View Is Next

This same livability idea is the basis for another DeSimone development downtown called Encore, which recently opened on Wilcox Street across from Riverwalk. Encore is a seven-story building near the Town Hall that features 124 condominiums as well as space for a few retail shops on the first floor.

“Encore also has a parking garage that is a public/private partnership with the Town of Castle Rock,” says Pam Ridler, president/CEO of the Castle Rock Chamber of Commerce. “The condo residents at Encore have 300 parking spaces, and the town has another 300+ parking spaces for people visiting the downtown area.”

“Castle Rock is looking to evolve beyond a bedroom community, with more offices, stores, restaurants, bars and entertainment venues popping up to serve those incoming populations.”

Ridler says all the construction downtown helps attract even more businesses. “Millennials and young professionals are looking to move into apartments, lofts and condos in the downtown area to be where the action is,” she says.

Currently under construction downtown is The View, a six-story mixed-use development with 221 apartments, 14,500 square feet of office space and 5,000 square feet of retail space. The View is being built at the corner of Jerry and Sixth streets and is in close proximity to The Move and a number of restaurants.

Enjoy the Outdoors in This Community

Besides downtown, other parts of town are experiencing residential and commercial growth, as well. One of the busier projects, The Meadows at Historic Castle Rock, will include 10,000 homes along with many commercial properties when built out. New homes in The Meadows are priced at $500,000 and up, and those who live there will have easy access to Interstate 25 and U.S. Highway 85.

“A big key to the planning of The Meadows was to keep the beautiful topography of the land, which includes hills and a great trail system,” says Kelsy Rooney, director of marketing and communications with Castle Rock Development Co. “Several homes are built right into the hills, and the whole community is outdoor oriented for people who love an active outdoor lifestyle.”

Community amenities include restaurants, a medical campus, a movie theater, storefronts, churches, playgrounds and gas stations. Plus, outdoor pools, neighborhood parks, ballfields and an events center called The Grange are also part of the community.

“The Meadows is along the Front Range of the Rocky Mountains and near many popular attractions, including within 2 miles of the Outlets at Castle Rock as well as Red Hawk Ridge golf course,” Rooney says. “The development is kind of a town within the town, with The Meadows having 30 individual neighborhoods and seven schools.”

Families and students looking for schools in Castle Rock will find a wealth of high-quality public, private and charter options at their fingertips.