10 Things to Do in Colorado Springs

Let's put it this way: Plenty of outdoor options bathed in scenic beauty.

Nestled among the Rocky Mountains, the Colorado Springs area offers a multitude of outdoor options such as hiking, climbing and sightseeing. Throw in the U.S. Air Force Academy and Olympic Training Center, along with a multitude of museums, and it’s harder to narrow down the list of things to do than find enough activities.

Located only about 10 miles west of Colorado Springs, Pikes Peak, at 14,115 feet, is one of the most well-known – and scenic – mountains in the U.S. Visitors can tour the mountain by car on the 19-mile scenic Pikes Peak Highway, on the Pikes Peak Cog Railway with an average grade of 12 percent, or hike up Barr Trail.

The prestigious military academy consistently ranks among the best U.S. universities, especially among engineering programs. The Academy is open daily to visitors. The visitor center contains a theater and a variety of exhibits. Visitors also can tour the Cadet Chapel and other facilities. Hiking also is allowed, including a recently reopened six-mile stretch of the New Santa Fe Regional Trail.

3. Garden of the Gods

Designated a National Natural Landmark in 1971, the free admission Garden of the Gods is actually a scenic city park known for its stunning red-rock formations. Fifteen miles of hiking trails wind through the park, which also offers daily 30-minute naturalist-led tours. During the summer, rental horseback trips are also available.

The flagship training center for the U.S. Olympic committee is the home of sport facilities and support services for 10 Olympic, Paralympic, Pan American and Parapan American sports. More than 130,000 visitors tour the center each year. Guided tours, which begin with a video presentation followed by a walking tour, are available throughout the year.

Designed a national historic district, Old Colorado City is a vibrant, tree-lined shopping district with a variety of restaurants, sidewalk cafes, art galleries, antique shops and boutiques – many in turn-of-the-century buildings. Colorado City, the first permanent settlement in the Pikes Peak region, was annexed into Colorado Springs in 1917.

The Colorado Springs area offers a wide range of museums for a variety of interests. Among them are the Colorado Springs Pioneers Museum, National Museum of World War II Aviation, Western Museum of Mining and Industry, Penrose Heritage Museum, American Numismatic Association Money Museum, Rocky Mountain Motorcycle Museum, and the Pro Rodeo Hall of Fame – Museum of the American Cowboy – to name a few.

As the name implies, Seven Falls is a series of waterfalls along South Cheyenne Creek in a box canyon between the towering rock formations known as the Pillars of Hercules. A set of 224 steps take visitors up to two scenic hiking trails. For the more adventuresome, the Soaring Adventure consists of 10 zip lines, divided between two courses, that range in distance from 300 feet to 1,800 feet.

Glen Eyrie is an English Tudor-style castle built in 1903 that was the original estate of Colorado Springs founder General William Jackson Palm. Visitors can tour the Carriage House and the first and second floors of the Castle. The Castle also offers 17  guest rooms for overnight stays, as well as daily afternoon teas. The 800-acre property is currently owned by the Navigators –an international Christian Ministry.

The only mountainside zoo in the U.S. is located at an elevation of 6,800 feet on Cheyenne Mountain on the west side of the city. The zoo, founded in 1926, consistently ranks among the top zoos in the country and is especially known for its large giraffe herd. Visitors can ride a historic carousel, purchased by the zoo after its appearance at the 1933 Century of Progress Fair in Chicago.

A bevy of scenic area parks offer miles and miles of hiking and biking trails of varying degrees of difficulty. Cheyenne Mountain State Park, just south of the city, offers 20 miles of hiking and biking trails. Red Rock Canyon open space offers trails with a view of Garden of the Gods. The Barr Trail, is a 12-mile hike -one way – that climbs 7,800 vertical feet from Manitou Springs to the 14,115-foot summit of Pikes Peak. Not surprisingly, it’s rated moderate to difficult. Dozens of other parks and open spaces offer hundreds of additional miles of trails. 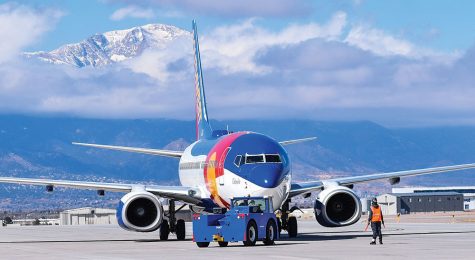