Innovation Through Revival and Reinvention in Pueblo, CO 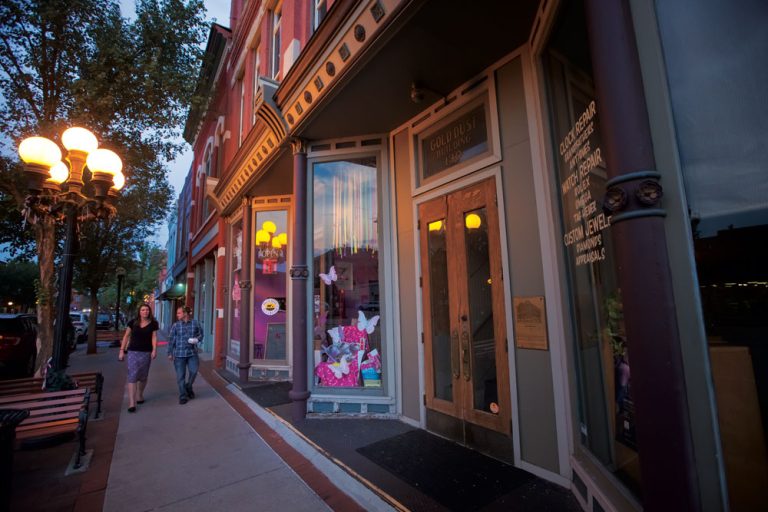 The most noticeable signs of innovation in Pueblo have resourcefulness and reinvention at their core — a combination that is reviving several key neighborhoods, particularly the city’s scenic Riverwalk district.

Innovation can take many forms, and in Pueblo it is marked with the concept of taking something “old” to develop something unique and transcendent. Amateur preservationist Joseph Koncilja did just that when he created Neon Alley – an alley filled with vintage neon signs that acts as a de facto outdoor art museum.

“In the ’50s and 60s, many people considered (neon) to be gaudy, but it has kind of come full circle,” Koncilja says. “Older people who are nostalgic say ‘Oh I remember them.’  But then I have young people, I’m talking 15- and 16-year-olds who come down every night just because they like the ambience that they create.

“I don’t know what I could have done to that alley that would have created more interest than the neon signs,” he adds. “The neon was the perfect fit to draw people in.”

Pueblo, CO is the Home of True Heroes – Find Out More About Them

From Cops to Hops

That idea – of the old becoming new again – extends beyond Neon Alley and has really taken hold along Pueblo’s Riverwalk. Brues Alehouse is one anchor business along the Riverwalk and a more concrete sign of the city’s revitalization. Built out of an old police station, the brewpub has become a magnet for both locals and out-of-town visitors.

“It is a combination of old and new construction,” says owner and brewmaster Tony Garcia. “We’re a brewery, restaurant, music venue, bakery, coffee bar, beer garden.  We almost wanted to create it like a little city. Our goal is to be a regional destination.”

Another law-and-order-themed business recently opened within the same complex to help complete that mission: Station on the Riverwalk is a boutique hotel featuring renovated jail holding cells for rooms and a guest lounge called “the Clink.”

Garcia points out that the craft brewing industry is booming in bigger Colorado cities, almost to the point of saturation, but not so much in Pueblo.

“Pueblo is kind of like the last frontier as far as brewing goes,” he says. “It is (a) relatively cheap place to live and start things.”

While it might be the last frontier for this on-going craft beer revolution, there is a longstanding tradition of brewing in Pueblo. Walter’s Beer was brewed in the city from the late 1800s to the 1970s. Investors recently brought the venerable beer brand back to life in 2014, opening a taproom and craft beer operation.

A particular highlight of this new Walter’s operation is a beer made with the famous Pueblo Chile, itself a catalyst for innovative thinking in luring more tourists to town. Local growers have united under Pueblo Chile Growers Association to collectively promote the crop and market the various outlets where people can find the chilies.

How Pueblo’s Chiles Helped Give the City its Brand

Pueblo’s City Hall is connected to a grand 98-year-old theater known as Memorial Hall, and over the years the two buildings had become vastly outdated.

Renovations were made to both buildings, with Memorial Hall reopening in 2013 and City Hall work completed in 2015. In addition to addressing building code issues, City Hall renovations also breathed new life into the building, bringing in more natural light and updating essential technology. Memorial Hall renovations completely revamped the old theater and made it possible to put on much bigger productions.

“We built an addition on the back (of Memorial Hall), which then gave us a back of house where we can have a loading dock,” says Bill Zwick, capital projects manager with the City of Pueblo.  “Before we would have four or five trucks waiting to unload and would probably get two of them unloaded because the stage wasn’t big enough.  So this enabled us to do a lot more performances, a lot more events and actually a new air conditioner has helped us to be able to do this all year round.”

“I think now we look at it and people are very excited about Memorial Hall,” he adds. “We have really increased the stage size so we can have more Broadway performances.”

Garcia says the size and civic atmosphere of Pueblo are what made all these renovations possible, and those factors should continue to serve the city well in the years to come.

“If we were going to put this project anywhere else, it would be vastly more expensive and it wouldn’t be as special either,” he says. “So it is really cool to (do) something in the community you are from and have it be a spark in the community.”