From a real-life Polar Express to a formal ball with penguins in attendance(!), New England pulls out all the stops for the holidays. All aboard! 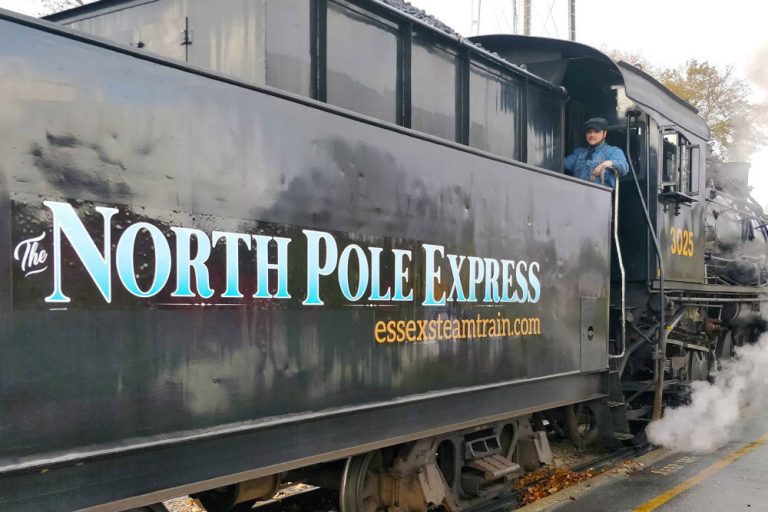 While the packed crowds around the Christmas tree at Rockefeller Center in New York City might be a must-see for some, you’ll find quaint and charming celebrations just a few hours’ drive north in New England. Whether you find yourself in Connecticut, Rhode Island, Massachusetts, Vermont, New Hampshire or Maine, you’ll be sure to find Santa, twinkling lights and good cheer. All the hot cocoa and caroling are almost enough to make you forget the winter cold!

Here are seven holiday activities throughout New England to consider this year:

The Essex Steam Train, a vintage historic steam train that rides through the Connecticut River Valley, is a just a few hours from both New York City and Boston. While the steam train operates all year long, there are several kid-friendly opportunities throughout the holiday season.

From now through December 23, Santa Special ride includes a visit from Santa, Mrs. Claus, Rudolph and Pablo the Penguin, with an optional Reindeer Breakfast beforehand. (Expect scrambled eggs, not reindeer, on the menu.)

The North Pole Express is a nighttime live performance of the “The Night Before Christmas.” Kids are encouraged to wear their PJs and will enjoy hot chocolate, cookies and visits from Santa and Mrs. Claus. The 90-minute-long rides will take place through December 29.

On both excursions, you might even be treated to Christmas carolers who are raising money for local charities.

Before or after your trip on the steam train, consider a visit to the nearby Griswold Inn in Essex, Conn., and the Florence Griswold Museum, which calls itself the “Home of American Impressionism.”

At the turn of the 20th century, Newport, Rhode Island, was the place for America’s wealthy families to summer-as-a-verb. Today their ornate mansions are museums, beautifully maintained by the Preservation Society Of Newport County, and packed with holiday events.

Santa will shimmy down the chimney in several of the stately homes throughout the month and you can expect to find a gingerbread model of each mansion, built by local pastry artisans, on display in its kitchen. (That is, if Santa doesn’t eat them first.) Throughout December, The Breakers mansion will host a series of holiday evening performances with orchestras and big bands. Make sure to visit The Breakers, The Elms and Marble House through January 1, as each one will be decorated for the holiday season — which is surely not to be missed.

The Christmas Prelude festivities in Kennebunkport, Maine, begin on December 8 with a Christmas tree lighting followed by fireworks. The next day is a late-afternoon Walk to Bethlehem, when a candlelit processional follows Mary and Joseph to three historic inns and finally the manger. Nighttime on the 9th brings the Fire + Ice party, with bonfires and ice sculptures (hopefully not in the same room) and live music. The town celebrates its 7th annual Pooch Parade of local pups in their best holiday attire.

Did you know Kennebunkport is the summer home of President George H. W. Bush? Santa can decide whether H.W. is on his naughty or nice list when the big guy arrives by fire truck on the 10th with candy canes for all. A trip to Kennebunkport won’t be complete without a horse-drawn sleigh ride at Rockin’ Horse Stables (or a visit to the Seashore Trolley Museum, if frostbite is setting in). Kennebunkport is a five-hour drive from New York City, an hour-and-a-half drive from Boston, or 40 minutes from Portland, Maine.

4. Massachusetts: The Train To Christmas Town

Does anything sound more “New England” than Christmas on Cape Cod? We thought not. There are still lots of tickets available for The Train To Christmas Town, a special ride on the Cape Cod Central Railroad where the book The Train To Christmas Town will be read to pajama-clad kiddos. Departing from Buzzards Bay, Massachusetts, which is one hour from Boston, the train makes a voyage to pick up Santa and his elves, who will hitch a ride back while visiting children car-to-car on the train. Guests can expect hot cocoa and cookies on board, as well as a caroling and other merriment. Christmas Town rides are available through December 27.

The Mystic Aquarium, located three hours from New York City, is worth a visit any time of year to meet its friendly beluga whales. During the holiday season, though, the aquarium’s Winterfest brings a special holiday magic. Santa is coming for breakfast on December 9 and sticking around for a pizza party that night. You can catch a screening of “Rudolph the Red-Nose Reindeer” in 4-D all month long. And on New Year’s Eve, the aquarium will host a Black and White Ball to countdown to midnight, including a special visit from endangered African penguins. Belugas and penguins? Worth it to brave the cold. You’ll also want to check out the Festival of Lights at nearby Olde Mystick Village on December 8, at which time admission to the aquarium will be free with a donation of a canned good.

The Woodstock Inn & Resort in Woodstock, Vermont, is holding its annual Wassail Weekend from December 8 to 10. While there’s no room at the inn (no pun intended) currently, the weekend is packed with public events. Go on docent-lead house tours of historical local homes, watch the Equestrian Parade on the town green, and enjoy a Celtic music performance at the local theater. The weekend wraps up with a performance of Handel’s Messiah, which includes four soloists as well as audience participation for the choruses. Elsewhere in Woodstock, visitors can hit the slopes or visit Billings Farm & Museum, a fully-operating Jersey dairy farm. The town is four hours from New York City and two hours from Boston.

A post shared by Strawbery Banke Museum (@strawberybankemuseum) on Dec 1, 2017 at 2:21pm PST

Located just one hour from both Boston and Portland, Maine, the town of Portsmouth, New Hampshire pulls out all the stops for its Vintage Christmas celebration. During three weekends in December, the Strawbery Banke Museum hosts a Candlelit Stroll with costumed players and musical performances as guests are lead past historic houses in town. On those same weekends, the museum’s ice-skating rink will host Currier & Ives-inspired performances and tickets for both events can be purchased for only $10 each.

From now through December 17, see Irving Berlin’s “White Christmas: The Musical” at The Music Hall and a holiday pops concert will take place there on December 20 and 21. At the end of the month, New Hampshire comedian Juston McKinney will perform two “Year In Review” shows at The Music Hall to send 2017 out with a bang.