The 7 Best Derby Day Parties Outside of Louisville

Can't make it to Louisville for the best two minutes in sports? Don't worry: Here are 7 other fabulous Derby Day options. 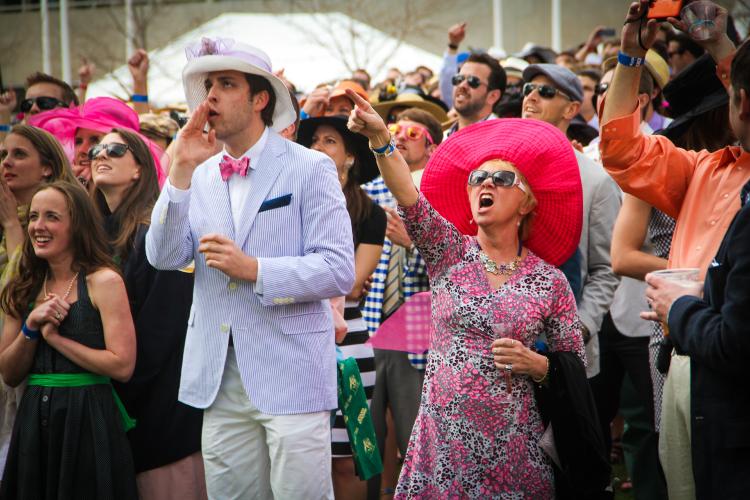 Photo courtesy of the Denver Derby

The best Kentucky Derby Day parties, much like hats, come in all shapes and sizes. On Saturday, May 7, 2016, party-goers will dress their best to celebrate one of the country’s most prestigious events, the Kentucky Derby. You don’t have to live in Louisville to celebrate, though. Cities all over the country throw annual Derby Day parties, and many raise money for scholarship funds or charities.

Here are the seven best Derby Day parties outside of Louisville:

More than 5,000 people attend Denver’s Derby Day to watch the derby and raise money for the Sean “Ranch” Lough Memorial Scholarship. It started in 2002 in memory of Sean Lough as a small charity event, but has grown into the biggest Derby Day party outside of Louisville, says co-founder Terrance Hunt.

Rain or shine, attendees can watch the race on 25 HDTVs, and enjoy food, fun and entertainment.

“[Derby Day] brings Denver people together,” Hunt says. “There’s a diverse demographic, and overall, a good time had by all. The party signifies that spring is coming – people thaw out, break out, warm up, and get out and have fun.”

Just up the way from Denver is the Boulder Derby Party at the CU Stadium Club at Folsom Field. Complete with mint juleps, dancing and casual betting, this best derby party benefits Front Range Hippotherapy, an organization that provides physical, occupational and speech therapy, using the horse as a therapeutic tool.

In the northeast region of the country is ’21’ Club, which has a history with horse racing. Since 1931, enthusiasts have donated painted jockey figures representing the most prominent stables in the U.S. In its second consecutive year, the Kentucky Derby at ’21’ celebrates racing, Maker’s Mark mint juleps and Southern bar bites, all while watching the big race on flat-screen TVs.

“In 2013, the turnout was more than twice what was expected and guests immediately tried to reserve a seat for the 2014 event. A new ‘21’ tradition was born,” says Avery Fletcher, marketing manager of ’21’ Club.

The Kentucky Derby Fundraiser to Benefit Boston Cares will be held at Lincoln Tavern in south Boston. The third annual event has door prizes, an auction and refreshments, with proceeds going to Boston Cares, an organization that rallies 25,000 volunteers a year who serve the city’s schools and nonprofits.

To the south, the six-year-old Derby Day Gala at the Rockledge Estate has become one of Roanoke’s most popular social events of the year, and raises money for the Mill Mountain Zoo and The Culinary Institute of Virginia. Guests can enjoy classic derby fare, friendly wagers, an auction of original fine art, dancing, and more.

If watching the Kentucky Derby isn’t enough, check out the live horse race, Run for the Roses at the Madison-Morgan Conservancy. This party also offers guests bourbon tastings and is the only fundraising event for the state’s first and only countywide conservancy.

And don’t forget the West Coast. The race is on at the Kentucky Derby Party at Golden Gate Fields in Berkeley, where people can watch and bet on the ponies, enjoy refreshments and enter the Run for the Roses hat contest, which awards cash prizes. General admission tickets are only $6 and kids’ admission is free.