Why Honeybees Are Big Business in Wilkesboro, NC

The beekeeping business is buzzing in Wilkesboro — here's how the town became an industry sweet spot. 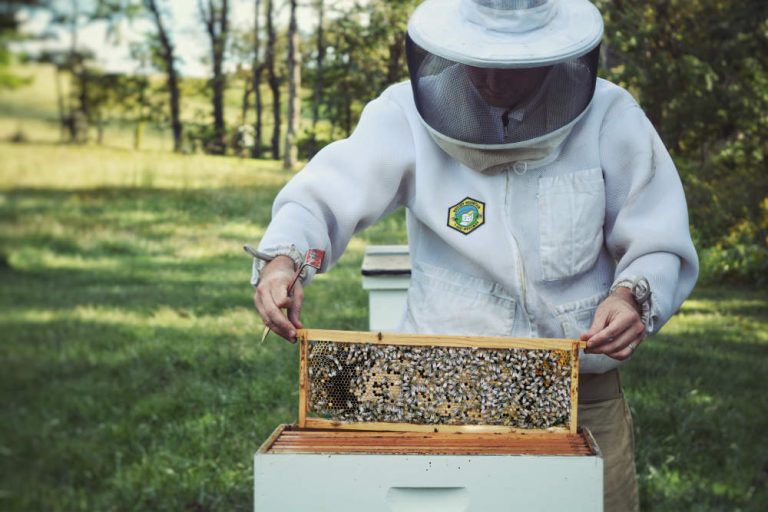 The plight of the honeybee has garnered extensive media attention in the past decade or two, with countless headlines dedicated to the uncertain future of these integral insects. The flip side of the crisis is that interest in beekeeping is now at an all-time high.

“The worldwide publicity that Colony Collapse Disorder brought to beekeeping created a surge of interest in people having beehives, either for pollination or to help out the bees,” explains “B” Townes, a master beekeeper who serves as president of the Beekeepers of Wilkes.

The beekeeping supply businesses of Wilkes County are well-positioned to serve this growing population of hobbyists, not to mention large commercial beekeeping operations. More than that, though, the local bee farms and supply businesses are working hard to educate customers, while also developing innovative new products that make beekeeping easier.

Consider, for example, the work of H.S. Greene, who spent more than 30 years as a professional woodworker in the construction industry before focusing his attention on developing a beekeeping business – Hidden Happiness Bee Farm. “I looked at the other companies – and with several major players in Wilkes County – I knew that the only way I could break into the industry was to be innovative,” he begins.

Greene recently developed the Happy Honey Bottle Helper, which enables users to bottle honey in receptacles of virtually any size. “Now you can bottle honey in everything from a 4-ounce jar to a wine bottle on the same machine,” he says.

Another recent innovation is the Happy Hive Bee Flag, a six-sided flag with magnetic stickers that enables users to mark which of their hives need care. “One sticker says ‘feed,’ another says ‘medicate,’ ” and so forth, offers Greene. “If the flag is up, the girls need attention; if the flag is down, those girls are happy,” he concludes.

Here are the Best Restaurants in Wilkesboro, NC

Meanwhile, the aforementioned Townes – a retired educator and administrator who spent 36 years at Wilkes Community College and now operates Townes Farm with his wife, Martha – has made educating people about bees a primary objective of his retirement years. Interestingly, the nickname “B” has nothing to do with honeybees. “I’m Frederick William Townes IV, and when I was born there was already a William and a Bill in our family. They said, ‘We’ll just call him B,’ and it stuck,” he explains.

One of Townes’ primary goals is educate consumers about the need for truth in labeling. “We believe in having honey tested [at Texas A&M University’s Palynology Laboratory] to try to raise the bar on standards for honey,” Townes begins.

For its part, Townes Farm produces a premium honey crop, including Sourwood honey, which is comparable to Orange Blossom or Tupelo honey. “There is no truth in labeling [for honey] in the United States, so at our level we are encouraging others to have their honey tested so the public knows exactly what they are getting,” he elaborates.

In fact, Sourwood honey is the reason Miller Bee Supply was founded by Sebert Miller in 1976. In the beginning “it was the main money crop,” says his son, Presley Miller, before noting that Wilkes County is one of the best areas in the state for Sourwood. These days, the 22-employee business “sells everything that beekeepers need,” offers Miller, and moves more than a million frames per year.

Miller attributes the company’s longstanding success to its frames (“the one thing that everybody brags about,” he says), as well as the way the company treats customers. “We don’t sell you anything you don’t need or don’t want,” he concludes. “We simply try to provide the best quality and service we can.”

That approach has also been successful at Brushy Mountain Bee Farm, which employs approximately 75 people in Wilkes County and is one of the largest bee supply companies in the country.

“You can think of us as a hardware store for beekeepers,” begins co-owner Shane Gebauer. “We sell everything from bees to all the tools a beekeeper might need. We also carry peripheral lines of equipment that are tangential to beekeeping like candle supplies and soap supplies where you might use honey or beeswax in producing those products,” he says.

Gebauer notes that Wilkes County is an exceptionally nice place to live and do business, especially if you’re in agriculture. He’s also gratified to see that more and more people – namely hobbyists – are recognizing the importance of the honeybee.

“One-third of every bite of food we consume is a result of insect pollination and the honeybee is doing the vast majority of that. Without the honeybee our agricultural systems would collapse,” he says.

“A lot of people think that the connection of the honeybee to agriculture is a relationship between the commercial beekeeper and large agricultural farms. But when I am teaching classes, I try to impress upon people that the backyard beekeeper has a profound impact. If you have just one or two hives in your backyard you are still doing a lot for local agricultural systems.”