Best Things to Do in Gainesville, FL

There are more than Gators in Gainesville. These are five things that you have to try in this energetic town. 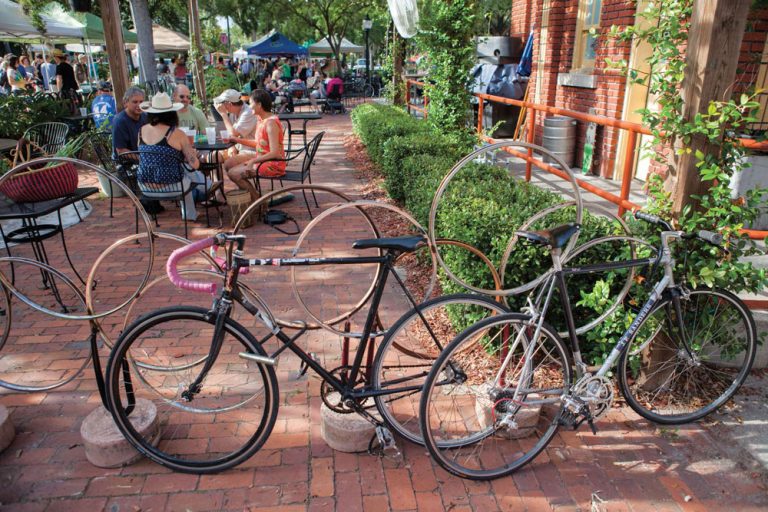 There’s a reason Gainesville is the largest city in North Central Florida, and it doesn’t only have to do with Gators and blue and orange and co-eds. There’s also a great outdoor scene, a surprising variety of food and drink options and one of the best downtowns in the Sunshine State.

Top 10 Reasons to Live, Work and Invest in Gainesville, FL

All the great things to do in Gainesville helped to make it one of our 2018 Top 100 Best Places to Live list. Newcomers to the city, in case you need that extra incentive to get out and explore your new favorite town, here are five things you have to try that will give you a picture of what this growing city is all about:

The Union Street Farmers Market was founded in 1996 by a small group of local farmers who wanted to build the area’s local farming community by giving an outlet to sell directly to customers, and to provide their city an entertainment option that would reflect the diverse population. Every Wednesday some of the area’s best and brightest artisans descend on Bo Diddley Community Plaza to sell wares from home-crafted soaps to baked goods to farm-to-table organic meat and produce. It’s not just a great excuse to explore downtown’s walkability – it’s also a delicious one.

Climb a Tree With Canopy Climbers

This eco-adventure company doesn’t just give people a view from the Florida forest top – they also build awareness of environmental issues and educate their guests in ecologically friendly forestry. In fact, in 2014 the City of Gainesville awarded the company their “Star Green Business Awardâ€ for “Utilizing a sustainable practice that preserves, protects and/or enhances the natural environment within the City.”

When it Comes to School Spirit, No One Beats the Gators

But don’t confuse them with an advocacy group – they’re really just trying to get you to love climbing trees. They offer several different courses in recreational tree climbing (think mountain climbing, but in trees) using ropes and saddles, or more informal group climbs for the casual climber.

Just a few minutes south of downtown Gainesville is the non-bustling metropolis of Micanopy. This town, which isn’t so much “sleepyâ€ as just plain “quaint,â€ is so picturesque that Hollywood (California, not Florida) has come knocking twice, for the movies Cross Creek (1983) and Doc Hollywood (1991). The fact that they’re one of the oldest cities in Florida also might be why they’re so well known for their antiques. Crammed into this town of less than 1,000 residents is a handful of shops that Floridians drive to from miles around to find some of the best buys in the state.

The wine list at Manuel’s tells you everything you need to know about what it does well. It’s as long a list as you’ll find at any other restaurant in the city, with a better selection than just about all of them. But it doesn’t get rave reviews just based on its extensive variety of grapes – it also pairs its fine drink with fine food. The best part is that their prices, while not exactly budget-oriented, are at least budget-friendly.

Go to a Gators Game

You have to do it. It’s practically a rite of passage for Gainesvillians, whether you’re a die-hard sports fan or just in it for the spectacle. And while the football is the ticket that most Gator fans crave, the university has a huge variety of sports, with a basketball team that’s been growing in popularity over the years to smaller sports like track and field, lacrosse or one of the first women’s programs at the University of Florida – gymnastics.