Gorgeous weather, beach access and a thriving cultural scene make Tampa one of the country's hottest markets for relocation. 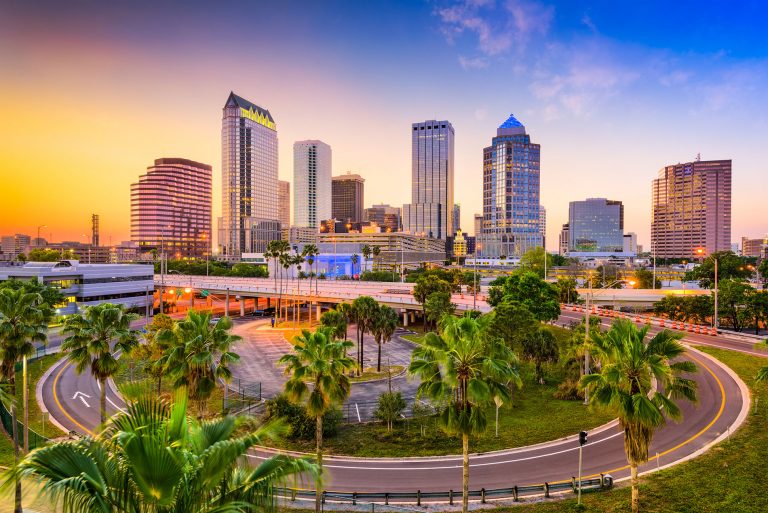 While Florida may be synonymous with retirees, Tampa has a relatively young population. There are two universities in town — the University of South Florida and The University of Tampa — and always something going on, from food festivals and concerts to sporting events and pop-ups.

It’s multicultural, too, especially beloved for its rich Cuban heritage headquartered in Ybor City. Add to this a stellar Gulf Coast location and temperatures in the 70s and 80s year-round, and it’s easy to see how Tampa made our 2021 Top 100 Best Places to Live list.

Outdoor enthusiasts have their pick of activities: bike trails, the 2.6-mile Tampa Riverwalk, kayaking, boating, fishing and paddleboarding. Or head to one of the many beaches in the greater Tampa Bay area, including Clearwater, St. Petersburg and quiet islands just offshore.

Wildlife sightings are common, especially the long-legged wading birds who show up in such exotic locales as local strip malls and your backyard. Manatees take refuge in the warm waters of the bay during winter. And you can see even more exotic animals at ZooTampa or Busch Gardens, Tampa’s very own world-class theme park. In the summer, cool off at the 30-acre Adventure Island water park.

But the most popular outdoor activities have to be the festivals. There are dozens throughout the year, but the beloved Gasparilla Pirate Fest, dating back to 1904, is the one Tampa is famous for.

An aquarium, opera, professional hockey, a 1920s movie palace — you name it, Tampa’s got it. There’s a museum for nearly every interest, from photography to science to baseball.

At the Tampa Bay History Center, you can explore three floors of interactive storytelling starring conquistadors, Seminoles, pirates and pioneers from the city’s fabled past. Meanwhile, the Tampa Museum of Art, which just celebrated its centennial anniversary, showcases a stunning breadth of ancient to modern treasures, such as pottery thousands of years old and thought-provoking contemporary works.

Those are just two cultural institutions accessible from the Riverwalk. There’s also the Straz Center for the Performing Arts, a children’s museum, a water taxi, a Moorish-style former hotel and more. Finally, the trail culminates in a trendy food hall at the west end.

Want to visit Ybor City? Just hop on the free streetcar from downtown or Channelside. When you get there, spend time tasting your way through the neighborhood. This is where the Cuban sandwich was born. Don’t miss the award-winning Columbia Restaurant with its live flamenco shows or La Segunda Bakery, where handmade Cuban bread has been drawing crowds for over a century.

Surprisingly, Tampa is fairly affordable. The median home sales price is $329,500, nearly 20% less than the national average. From the high-rises downtown to the more suburban vibe in North Tampa, each neighborhood has its own style.

As a historic port city, Tampa has always welcomed transplants. It drew waves of immigrants in the 1880s from Spain, Italy and Cuba to its booming cigar factories, hence its nickname “Cigar City.” In the 20th century, newcomers from Asia and the Middle East joined the increasingly diverse population. Today, over 130 nationalities call Tampa home, and it’s currently the fastest-growing rental market in the U.S.

With the growth in population (Tampa has the second-largest metro area in the state) comes a growing job market. Top employment sectors include manufacturing, education and professional services.

Residents enjoy easy access to quality healthcare, including Tampa General Hospital, ranked one of the best in Florida, and an international airport right in town. They also love their pets, as shown with the dozen-plus dog parks, pup-friendly restaurants and popular dog beach at Davis Island.

And there’s always the perk of no state income tax, leaving more money in your pocket to soak up the sights and sunshine in the greater Tampa Bay area.

The results are in. Did your city make the list?