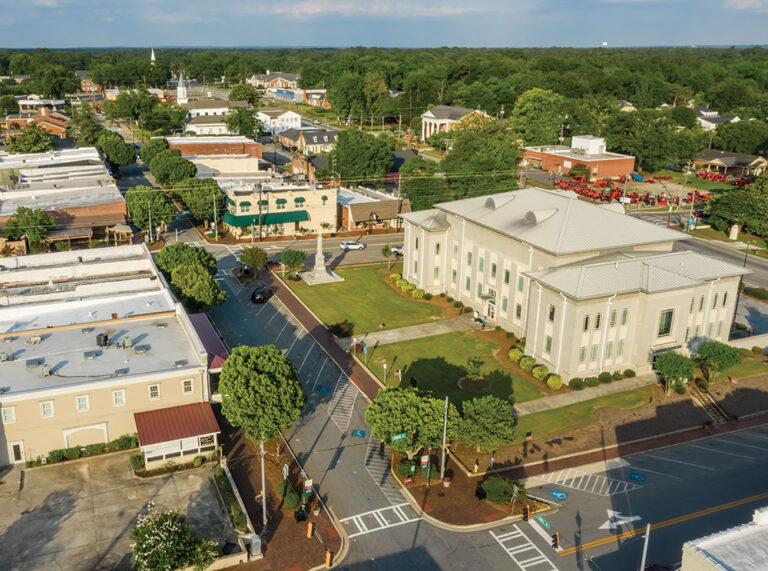 With its central location along the busy I-75 corridor between Atlanta and Florida, the region is a location of choice for various companies in everything from aerospace to agribusiness. The area boasts a highly educated and skilled workforce and a suite of local and state incentives encouraging business investment.

“Our location proves advantageous,” says Angie Gheesling, executive director at Development Authority of Houston County. “In this part of Georgia, you can travel to the coast or mountains in three hours or less. You can quickly be in downtown Atlanta for events or the Hartsfield-Jackson airport in 90 minutes.”

Access to colleges and universities, a premier K-12 education system, low cost of living and doing business, and accessibility to other markets and travel destinations are only a few reasons the Robins Region has experienced tremendous growth. “Houston County has been tremendously successful with industry expansions, even during a pandemic, and we are competing against other locations across the country,” Gheesling says.

“Houston County is very diverse, from the highly commercialized area of Warner Robins to the quaint small-town feel of Perry, which has mom-and-pop establishments throughout. The community serves as a shopping and employment hub for many counties, and retail is supreme,” Gheesling says. “But the people are what make Houston County so appealing. The entire community is very family-oriented, from events to parks and recreation.”

As a result, the region’s thriving economy has added more than 7,000 jobs since 2015. And it’s only going to get stronger. It’s easy to see why businesses are flocking to the Robins Region. For example, the local economy was bolstered in April 2022 with the announcement that beef jerky manufacturer Jack Link’s would build a $450 million manufacturing operation in Perry that intends to create 800 jobs.

“The company has experienced consistent growth throughout the U.S. since launching in 1985, and expanding operations to Perry, Georgia, will allow the company to better serve its customers and consumers across the country,” says Lisa Oster, communications and public relations leader for Jack Link’s. “Jack Link’s is grateful for the opportunity to invest in the City of Perry for the long term and is committed to becoming a strong community advocate.”

The City of Perry and beyond widely supported the Jack Link’s expansion. “There are too many to name individually, but the City of Perry, Development Authority of Houston County (DAHC), State of Georgia, and Georgia Power rolled out the red carpet for us and continue to work with us to build our amazing new Jack Link’s production facility in Perry,” Oster says.

The region is also a great place where companies can grow. For example, Clean Control Corp., a locally owned business that has manufactured OdoBan The Original Odor Eliminator since 1980, now employs more than 100 people in Warner Robins.

Birthed out of necessity, OdoBan was a solution to escalating chemical costs. At 24, Stephen Davison, founder and CEO of Clean Control, started Mobile Wash of America (MWA), a government janitorial contractor focused on cleaning industrial equipment. The need for superior cleaning products led Davison on a mission to develop technologically advanced, cost-effective cleaning solutions. As a result, the OdoBanbrand of products is now recognized worldwide as a leading solution for odor elimination and disinfecting.

“People move to Houston County for employment due to the transient nature of the military personnel associated with RAFB,” Gheesling says. “Most of the people employed at RAFB are civilians. One new job at RAFB equates to 1.58 jobs regionally. In Middle Georgia, RAFB employs 28.86% of the workforce – for Houston County, the percentage is 58.45.”

The Warner Robins Air Logistics Complex, which employs more than 7,000 people, plays a significant role in providing maintenance, engineering support and software development to military aircraft and weapons systems. “The base delivers an economic impact in the region of more than $3.8 billion,” Gheesling says. “Warner Robins’ metropolitan statistical area population has surpassed Macon-Bibb due to this rapid growth.”