For a Hawaiian Foodie Adventure, Head to Hilo

If you love to eat, this Hawaiian city is a must-visit. 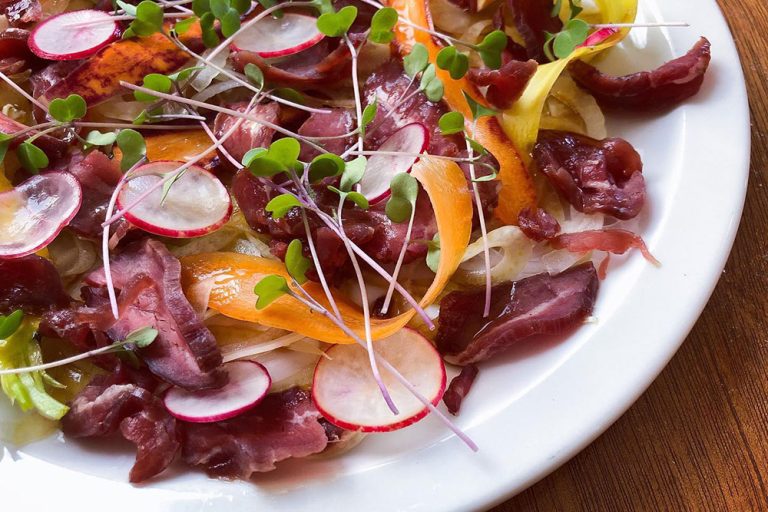 You can think of Hilo like the Portland, OR, of Hawaii. It’s cloudier and and more rainy than its leeward counterpart of Kona. It’s not quite as bustling and touristy as bigger, sunnier cities like Honolulu and Pearl City. If you drive out of Hilo in any given direction you’ll end up in outdoor wonderlands with radically different scenery, from rainforests to volcanoes to the coast. It’s full of mid-century modern charm.

And like its Pacific Northwest counterpart, Hilo is an unexpected paradise for foodies.

Hilo is a culinary melting pot where you’re as likely to find incredible sushi as you are to order up an unbeatable French pastry. People here take high-end coffee and seafood seriously, but won’t turn their noses up at classic comfort food like pancakes or gravy. There’s room for both street food and fine dining, and you might be surprised by the playful interchange between the two. And while you can certainly find island favorites that are almost unheard of on the mainland, you don’t have to worry that you’re missing out on what the locals actually eat while you’re indulging your curiosity.

Just ask Chef Mark Pomaski, who opened Moon and Turtle, one of Hilo’s most celebrated restaurants, with his wife Soni. Pomaski is from Hilo but got his culinary start at a sushi restaurant in Eugene, OR, before working his way up the ladder at restaurants in Waikiki and New York City. When it came time to open their own concept, they knew they wanted to return to Hilo. Now the pair have helped define the food scene in Pomaski’s hometown with an eclectic, inventive menu that blends Japanese techniques and seasonal ingredients in an approachable space.

Moon and Turtle has small, shareable plates that balance impeccable sushi-grade seafood with humbler produce and unexpected flavor combinations. The result is a menu that’s pure Hilo, at once homey and refined, with dishes like local striped marlin smoked over a kiawe fire – Hawaii’s answer to mesquite. Or you might tuck into a classic parmesan and truffle-spiked risotto with a slight Japanese twist, thanks to the inclusion of Hamakua and Shiitake mushrooms and Koshihikari rice. Even the cocktails get the same treatment, with a take on a classic French 75 that features butterfly pea syrup.

Other Hilo restaurants take a more straightforward approach that’s directly tied to the city’s history. Cafe 100, for example, has been open since before Hawaii became a state. Named for the battalion in which founder Richard Miyashiro served in World War II, some of the current staff have been working here since the very beginning. Even two tsunamis couldn’t put a damper on their menu of island classics like pupu platters and loco moco, hearty Hawaiian dishes that have been feeding families and curing hangovers at Cafe 100 since 1946.

So, why is Hilo is home to so many incredible restaurants?

For one, Hilo has more of a local vibe than Kilauea and Kona to the west. Chefs here aren’t quite as beholden to mainlanders’ tastes, or expectations for pineapples and ham, as they are in cities with more tourist traffic. Instead, there’s an opportunity to explore the rich cultural interchange of the South Pacific, not to mention the fantastic ingredients coming out of the ocean, Hawaiian farmers’ fields, and from markets in Asia and the American West Coast.

That’s why you’ll find some of the best mochi anywhere in Hawaii at Two Ladies Kitchen, an unassuming venue that routinely sells out of popular flavors. You’ll also find more European desserts made with equal craft at Moonstruck Patisserie, where you can order everything from a very Parisian quiche to tropical lilikoi cheesecakes. And some of the best spam musubi anywhere in the Aloha State comes from a little hole in the wall here called Kawamoto Store.

Even home cooks benefit from Hilo’s thriving food scene. The Hilo farmers’ market not only boasts 200 vendors in its thirtieth year, it also holds the distinction of being the first open market in the nation to gain official federal approval to accept SNAP benefits. Anyone can shop here for everything from rambutans to fresh fish, and additional programs like Da Bux were implemented to give families relying on food assistance easier access to Hawaii-grown produce.

Sure, you might get a little more rain in Hilo than you would on the other side of the island. But that also gives you another excuse to skip the beach and stay inside. That’s not a bad proposition when there are so many incredible restaurants to work your way through, and unexpected culinary gems to uncover. In fact, it’s all part of what makes Hilo so deliciously irresistible.