Skip to content
Home > IL > Champaign > Where to Live Now > Why Champaign, IL Is a Great Place To Raise a Family

Why Champaign, IL Is a Great Place To Raise a Family

From a stellar school system to a welcoming community, the Champaign-Urbana area is the perfect place to grow your family. 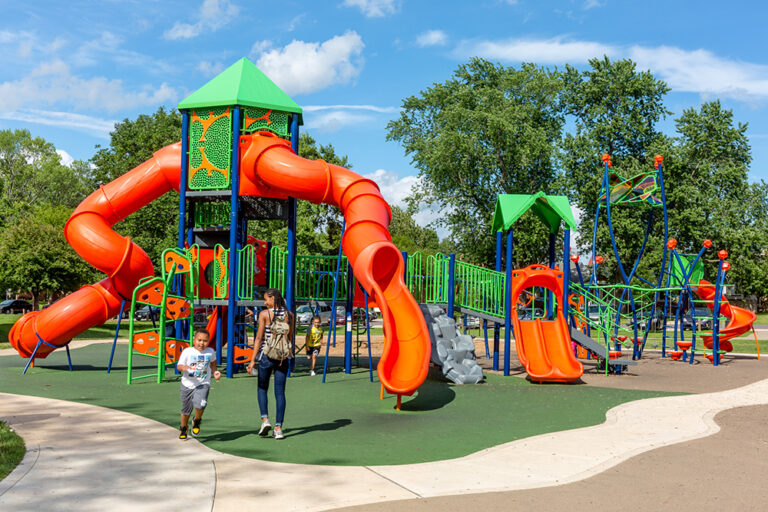 Champaign–Urbana, IL, is one of those quintessential Midwestern towns where you’d find people having dinner on a patio downtown, strolling leisurely through a park or offering a neighborly wave as you pass by on the street.

If you’re looking to plant roots, Champaign–Urbana’s impressive school systems, diverse community and many parks are just a few of the countless reasons why it’s a great place to consider.

Champaign County is home to 205,865 year-round residents, many of which are families, and the affordable cost of living (29% lower than Chicago, 7% lower than Indianapolis and 5% lower than Peoria) makes it easy for newcomers or the University of Illinois alumni to buy a home and nestle into the community. But the university provides more than just graduates — it also offers plenty to see and do, from Big Ten sporting events to live theater performances and more.

Champaign–Urbana also has a community college, Parkland College, and 28 impressive K-12 schools, all of which are attractive for families moving to town.

With so much being offered in the community — from its diversity in culture and cuisines to its walkability and connectivity to surrounding areas — there’s plenty of appeal for visitors or those considering a move. Here are some of the standout reasons Champaign-Urbana is a great place to raise a family.

Green spaces are plentiful, and residents are encouraged to take advantage of it.

One of the features Champaign is most proud of is that every household is within walking distance of a park or green space.

“Our nearby park has a playground, and we walk our dog there,” says Genevieve Kirk, a graduate of the University of Illinois who’s lived in Champaign for over eight years with her husband and children. “There are also a lot of bike paths that people can enjoy as a family.”

But even beyond simply having said parks and green spaces, Champaign works to keep its community clean and presentable. For Robert White II, a Southern Illinois transplant who has lived in Champaign for six years with his three children, the aesthetic of Champaign–Urbana played a role in his choice to make the area home.

“You can go to different parts of town and get a completely different view. I love driving down Green Street at night, where you’ll see students out and about, or Lincoln, where the Japan House Gardens are, or down Springfield with all of its trees. It’s something you wouldn’t see in St. Louis or Chicago without traveling far from the city.”

But the parks around town aren’t the only outdoor fun to be had in Champaign. There are actually six forest preserves nearby that offer all the fun of hiking, biking, camping, kayaking, canoeing and fishing, including Middle Fork River Preserve, which is home to the state’s only International Dark Sky Park. And the popular Allerton Park and Retreat Center is where you’ll find 14 miles of hiking trails with art interspersed throughout.

The city as a whole is very walkable or otherwise accessible, with plenty of bike lanes and easy-to-navigate public transit. “This may not apply to everyone, but we’re able to live with one car because we have such a great bus system between towns, big districts, and the university,” says Kirk. “It’s very accessible and compact compared to other areas.”

The schools are some of the best around.

You’ll likely find a blend of Champaign–Urbana residents who are from the area, from other parts of Illinois, or from different places entirely. But many who choose to make the city home base do so because of the reputation of Champaign-Urbana’s school system.

“My son was the main reason why I wanted to move to Champaign; I knew it had a really good school system and good teachers,” says White. “Champaign was a great fit because there’s a lot of diversity in the community, and that trickles into the school system.”

For both White and Kirk, who each have children, the schools played an integral role in deciding if Champaign would be the place to start a family; both are beyond impressed with their experiences so far.

“It’s a great community for our kids,” says Kirk. “We’re plugged into the school system here and have had a really good experience with the choice of school programs. There are a lot of bilingual and bicultural programs here and a lot of private schools to choose from as well.”

White also notes that the welcoming and acceptance of so many cultures in Champaign-Urbana — a direct result of the university’s international population — is hugely important for developing kids. “To be around different populations and communities gives everyone a more well-rounded worldview.”

Work-life balance is made easy with short commutes and adventure around every corner.

Of course, affordability is a big deciding factor when it comes to settling down and raising a family, and often, that affordability is tied to work. But the ability to buy a house your first year out of grad school or knowing your average commute won’t exceed 15 minutes adds some extra appeal to planting roots.

Genevieve Kirk was able to buy a house her first year, and one of her favorite aspects of living in Champaign is the freedom to create the life she wants. “You can live here and avoid the rat race of two full-time jobs,” she says. “It enables a lot of flexibility and creativity for your lifestyle.”

And if sustainability or greener living is a value you hold, that’s another point for setting up shop. “It’s a great place to raise a family and set up in a way that’s very sustainable,” she says. “You’re able to travel more or do whatever you want with those extra resources. There’s also enough to do here in our downtown business district, including live music, events and restaurants, that if you look, there’s enough to keep you entertained.”

The community is diverse and welcoming — no matter who you are or where you’re coming from.

Because of the University of Illinois, which enrolls more than 11,000 international students each year, the community of Champaign–Urbana is beautifully diverse.

The chance to experience and celebrate such an array of cultures is a unique perk for Champaign-Urbana residents — and they welcome the opportunity with open arms.

“The people that are from here have been pretty accepting of the people that aren’t originally from Champaign or even America,” says White. “The surrounding areas outside of campus town are very supportive. People setting up new businesses and restaurants, they’re all becoming part of the community.”

This article was sponsored by Visit Champaign County.