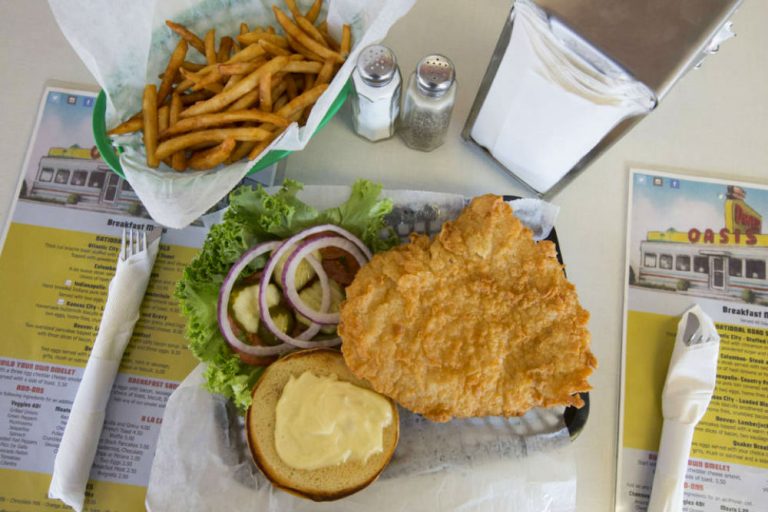 In the early twentieth century, German immigrants settled in the Midwest and brought their beloved pork schnitzel recipes with them. Over the years, as pig farming gained traction in Indiana and the Midwest’s affinity for the deep fryer grew, this succulent German staple was reinvented as the Indiana Tenderloin.

For those who aren’t familiar with this iconic state sandwich, here are the basics: an Indiana tenderloin is hand-breaded, deep fried or grilled, served on a toasted bun, and topped with lettuce, tomato and onion. Mayo and ketchup are customary while the addition of pickles can spark a heated debate. The tenderloin is usually at least twice as large as the bun. You can divide and stack, edge your way around the fried pork pancake, or just pick up the whole thing and go for it, but one thing’s for sure: there’s no wrong way to eat a tenderloin.

Just about every restaurant in Indiana serves a tenderloin, but not all tenderloins are created equal. The one thing everyone can agree on? Eating a tenderloin is a rite of passage for Indiana natives and an absolute must for visitors.

Indiana is so tenderloin-obsessed that there’s even a Tenderloin Trail in Hamilton County where you can try over 50(!) different tenderloins. We highly recommend trying all of them at some point, but to make things simple, we’ve compiled a list of the 10 best tenderloins in Indiana.

A post shared by Huntington Visitor Bureau (@visithuntingtoncounty) on Aug 3, 2017 at 6:28am PDT

Many believe that the tenderloin was created at Nick’s Kitchen in 1908. Today, people drive for hours just to get their hands on this delicious, hand-breaded creation. The owner Jean Bailey says her tenderloin stands up against the rest because the meat is custom cut by a local butcher. She then marinates the tenderloins overnight in buttermilk, and dredges and fries them to order in cracker meal. The result is a delicious combination of golden fried goodness. No need for a side on this one, it is huge.

You can keep it classic at Rosie’s with the hand-breaded tenderloin or do tenderloin for breakfast with their Tenderloin Eggs Benedict. With tender pork tenderloin on a split biscuit topped with two poached eggs, cheddar cheese and sausage gravy with country potatoes, you won’t be hungry again until dinner.

Moving to Indiana? Here’s What You Need to Know

This brewery in Fishers, just north of Indianapolis, is only a year old but they’ve already earned an excellent reputation for their casual pub fare and brews. Their tenderloin is hand-breaded and served with spicy mustard and (gasp!) pickles.

Why Fishers, IN Is One of the Best Places to Live in America

A post shared by Indianapolis’s @BestFoodFeed (@bestfoodindianapolis) on Jul 17, 2015 at 5:03pm PDT

Edwards has been serving car-hop style since 1957 and one of their most popular menu items is the breaded pork tenderloin. If you’re in Indianapolis, this is a must-visit. Don’t forget to try their homemade root beer and hand-dipped onion rings as well.

You can get the classic hand-breaded version here … OR you can try the hand-breaded Indiana pork loin covered with homemade sausage gravy. This tenderloin breakfast is served with two eggs, home fries and a side of toast. Good morning, indeed.

Upland serves the traditional tenderloin as well as a housemade and hand-breaded seitan tenderloin so good that even pork tenderloin purists can’t argue with its taste. Upland Brewing has multiple pubs around the state but their original brewpub is in downtown Bloomington, home of Indiana University.

Their signature dishes are German of course, but as we learned earlier, the tenderloin is but a distant cousin of the pork schnitzel. Try their breaded pork tenderloin sandwich with an ice cold beer on their gorgeous patio.

The Steer-In has been an Indy institution since 1960 and its tenderloin has made it to the top of “Best Of” lists in Indianapolis for many years. Its quirky, retro-inspired vibe is reason enough to visit and the fantastic food just makes the experience even better.

Once home to the Carmel Public Library, which was built in 1913 with an $11,000 grant from the Carnegie Corporation, this charming building is now home to Woody’s Library Restaurant. Try their tenderloin blackened, grilled, or with a kettle chip crust.

This beloved Fishers spot serves the classic hand-breaded tenderloin, but you can also spice things up with their cajun tenderloin. Rumor has it that Nickel Plate was Peyton Manning’s favorite tenderloin while he played for the Indianapolis Colts. If true, we can confirm that Peyton has great taste.