Skip to content
Home > IN > Indianapolis > Where to Live Now > Why Indianapolis, IN is a Great Place to Live

Why Indianapolis, IN is a Great Place to Live 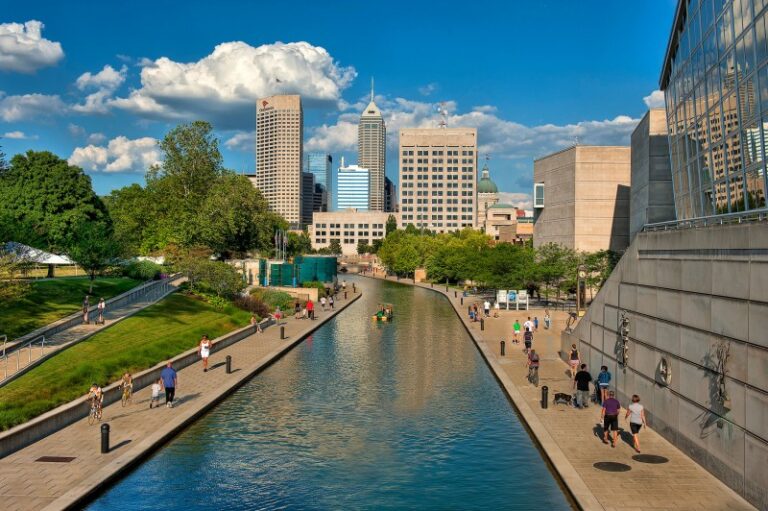 It’s no surprise that the first thing that comes to mind when people think of Indianapolis is the Indy 500. The auto race–held annually on Memorial Day weekend at the Indianapolis Motor Speedway,  marks the 100th running in 2016. Less well-known is the Circle City’s longstanding effort to make Indianapolis easy to navigate, whether on foot, using public transportation or driving.

“Forty years ago, then-Mayor Richard Lugar had a vision to make the downtown the most walkable downtown in the United States,â€ says Chris Gahl, vice president of marketing and communications for Visit Indy. Over the years, the city has built on that vision, creating, for example, a climate-controlled pedestrian skywalk system that connects major downtown destinations like the Circle Centre Mall, Lucas Oil Stadium and the Indiana Convention Center with parking and hotels.

“As part of that walkability, we have a 250-acre urban green space called White River State Park,â€ Gahl says, noting that the park is also home to attractions like the Indiana State Museum, Eiteljorg Museum, and the Indianapolis Zoo.

More recently the city created the Indianapolis Cultural Trail, an 8-mile urban bike and pedestrian trail that connects a half-dozen neighborhoods. And this year IndyGo, the Indianapolis Public Transportation Corporation, will open a thoroughly modern $26 million transit center that promises to improve utilization of the city’s public bus transportation system, as well as rider experience.

These and other transportation-oriented initiatives are allowing Indianapolis to continue to build on its other strengths, which include a burgeoning local sports scene that features the NFL’s Indianapolis Colts and annual auto races like the Crown Royal 400. Of course, Indy is also home to the NBA’s Indiana Pacers and the Butler University Bulldogs, among other popular teams.

“Although basketball was invented in Massachusetts it has been perfected in Indiana and we take our basketball very seriously,â€ says Gahl, noting that Indianapolis is a great place to celebrate one of the best sports movies ever made.  Hoosiers was based on an event in historic Hinkle Fieldhouse, found on the campus of Butler University, while Plump’s Last Shot is in the cultural enclave of Broad Ripple.

Now the challenge is to continue getting the word out that Indianapolis is much more than just a great sports city with a dynamic downtown–and to get people to recognize that in many ways Indy has been ahead of its time. Speaking about its restaurants, Gahl notes that “if Indianapolis had coined the term ‘farm to table’ 30 years ago we would have been justified. We are surrounded by numerous farms with agriculturally rich soil, and our restaurateurs have been sourcing locally for decades–before that phrase was coined and before it was the hip thing to do.”

It helps that Indianapolis boasts a cost of living that is 11 percent below the national average, enjoys a diverse economic base and has modest traffic congestion for a city its size.

“We see families gravitate to Indianapolis because of the affordability and drivability,â€ Gahl says — not to mention all of the arts and cultural attractions, which ensure there’s never a shortage of things to do.

Many of Indy’s neighborhoods have experienced urban renewal, with Fountain Square, southeast of the downtown business district, a prime example.

Although basketball was invented in Massachusetts it has been perfected in Indiana.